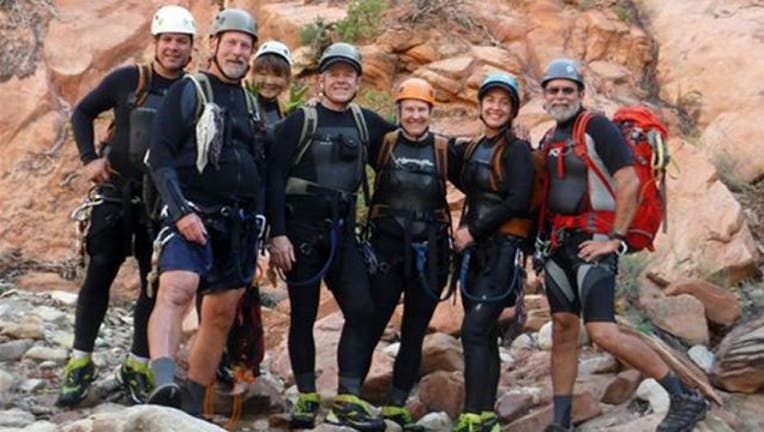 SALT LAKE CITY (AP) — Seven avid hikers in safety helmets, wetsuits and climbing harnesses smiled for a group photo before heading into the mouth of a narrow canyon in Zion National Park in Utah.

The 50-something men and women from California and Nevada posed with their arms around each other before trying to climb and swim through the popular sandstone gorge.

Hours after they entered Keyhole Canyon, dark skies unleashed fierce rains that sent water surging through the chasm, sweeping the seven people to their deaths Monday.

The last body was found Thursday — the same day authorities recovered a 33-year-old man killed by flash flooding near the Utah-Arizona border, raising the death toll to 20 from the violent rainstorm.

At least 12 other people, including nine children, died in a nearby polygamous town when two cars were swept away. A 6-year-old boy was still missing.

Some of the seven hikers took a canyoneering skills course just before the excursion, park officials said. Some also knew each other through a hiking club in Valencia, California.

The photo was taken on a "tragic last adventure" for the group who regularly hiked and backpacked, the children of victims Linda and Steve Arthur, of Camarillo, California, said in a statement.

Steve Arthur, 58, was a sergeant and 21-year veteran of the Ventura County Sheriff's Department, Capt. John Reilly said. Arthur was awarded the Medal of Valor in 1998 for rescuing a man from a burning car.

"If he wasn't at work, he was out with his kids or grandkids, hiking all the time," Reilly said.

Arthur was excited about the trip and boasted about getting the permits for Keyhole Canyon, which only 80 people a day are allowed to visit.

"He was fortunate he was with the love of his life — his wife — they were both excited about going on these trips," Commander Monica McGrath said.

Mark MacKenzie, 56, of Valencia also looked out for others, particularly in the outdoors, said his mother Deanna MacKenzie Sisung.

"He'd carry a watermelon in his backpack, and he'd usually be the first one up there, and he'd serve everybody," Sisung said of MacKenzie, who had three children.

Don Teichner, 55, of Mesquite, Nevada, met members of the group through a California hiking club. The father and grandfather was an executive at his family's Los Angeles-based garment-dyeing company, said cousin Jeff Teichner.

Gary Favela, 51, of Rancho Cucamonga, California, was adventurous and had a love for canyoneering, his family said in a statement.

Muku Reynolds, 59, of Chino, California, was a doting grandmother and active in many Meetup.com hiking groups, spending nearly every weekend outdoors, said Graham Willis, 32, who met her in one such group and summited Mount Whitney with her last summer.

He said Reynolds, who grew up in Japan, was known for collecting heart-shaped rocks along trails.

Reynolds had been canyoneering in Zion three years ago with a guide, said Kathryn Burrows, 54, who hikes with her and took a canyoneering course with her back then.

"She knew those guys, she has hiked with that club a lot," Reynolds said. "People really trust each other."

Robin Brum, 53, a wife and mother from Camarillo, was a selfless person who cared for those around her, her family said.

"She leaves a hole in our hearts and our lives that will never be filled," a statement said.

Park officials say they warned the group when they got their permit that there was a 40 percent chance of rain and flash flooding. Rangers give similar warnings nearly every day during the rainy season.

Park policy prevents rangers from assessing visitors' skills or stopping them from entering canyons. Zion is investigating what led to the deaths and reviewing its policies, but the process for canyon entry permits is decided at the national level, park spokesman David Eaker said.

Rangers closed the canyons after the storm hit, but there was no way to warn those already inside the majestic slot formations that can quickly fill with rain water and leave people with no escape.

Steve and Linda Arthur's children said their parents were extremely cautious and had been watching weather reports closely. They texted family for updates before they headed into the canyon, but they didn't get cellphone service at the trailhead.

"This is nothing but a freak accident and a true case of being at the wrong place at the wrong time," the couple's children said.