Timelapse video captured the first supermoon of the year as it rose in the sky over Rhode Island’s Newport Bridge.

The video, captured by Mike Cohea on April 26 in Jamestown, Rhode Island, shows the big moon with a golden hue shining over the bridge — which connects the city of Newport on Aquidneck Island and the town of Jamestown on Conanicut Island.

This supermoon, known as the Pink Moon, was the first of two in 2021. A supermoon refers to a new or full moon that is at its closest approach to Earth in its orbit. This means it may appear up to 30% brighter and up to 14% bigger than other full moons in a year.

Contrary to the name, the Pink Moon doesn’t actually appear pink in color. According to the Farmer’s Almanac, it’s named after the herb moss pink. The plant is native to the eastern United States and is one of the earliest widespread flowers of spring. 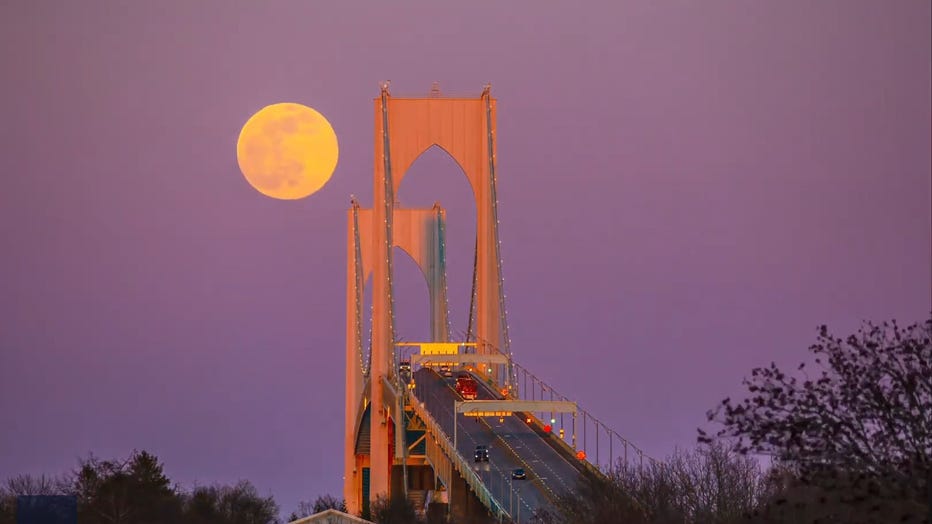 "The Moon will appear full for about 3 days around this time, from Sunday evening through Wednesday morning," according to NASA. "Since the Moon will be at its fullest less than 12 hours before perigee (when the Moon is at its closest to the Earth in its orbit), this will be a supermoon."

The second supermoon of the year will occur on May 26.

RELATED: Supermoon Pink Moon to appear big and bright in the evening sky in April

This story was reported from Cincinnati. Meteorologist Stephanie Weaver contributed.