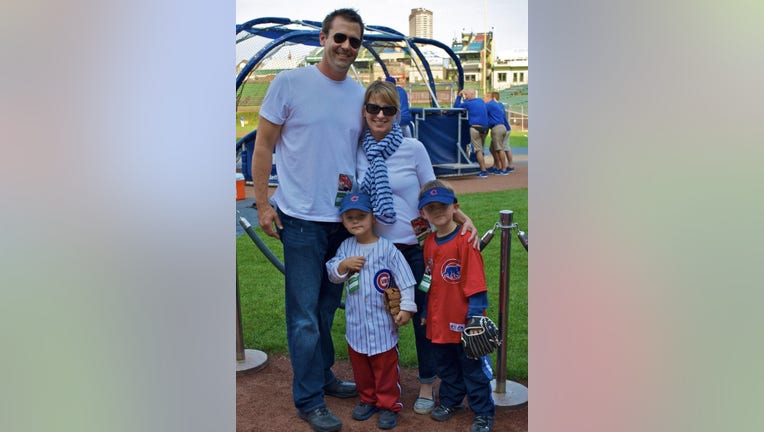 CHICAGO - Baseball took a back seat at Wrigley Field on Thursday for a more important effort.

A mobile blood drive was held at the ballpark, with people from the Cubs and Marquee Network pitching in.

It is part of a blood drive movement called, "A Pint for Kim."

The drive is named after Kim Sanford of Naperville who died last March.

She had multiple blood transfusions during her long battle against cancer, then gave her husband and family a job to do: inspire blood donations in her name.

A mobile blood drive was held at Wrigley Field Thursday.

"We’re just not going to let her go quietly, like the loss is going to be there no matter what, but if we can take that and make something good out of it and save lives in her name, I think that’s really what’s keeping us going," said Kristyn Benedyk, Kim’s sister.

First up to the plate at this blood drive was Ryan Sweeney, a former Cubs player and current Marquee network analyst.

"Anything I can do to help out and use my voice by working here with the Cubs and having formerly played for the Cubs, I’m always down to do," said Sweeney.

The family of a woman who passed away from cancer is honoring her by hosting blood drives and helping those who need it most.

Kim was also a Cubs fan, so her husband, sons and sister got to see the Cubs World Series trophy up close as they set out to break some donation records.

The event at Wrigley was just the start of a weekend to inspire donations.

The big event is Saturday when Kim’s family plans to break their own record for the largest one day, one location blood drive in Illinois.

They set that record last year, at their first event soon after Kim passed away. Saturday’s event will be held at the Aurora Municipal Airport from 8 a.m. to 6 p.m.

This comes as area blood banks report a dangerously low level of blood supplies, especially type O, since the pandemic has cut into normal donations.