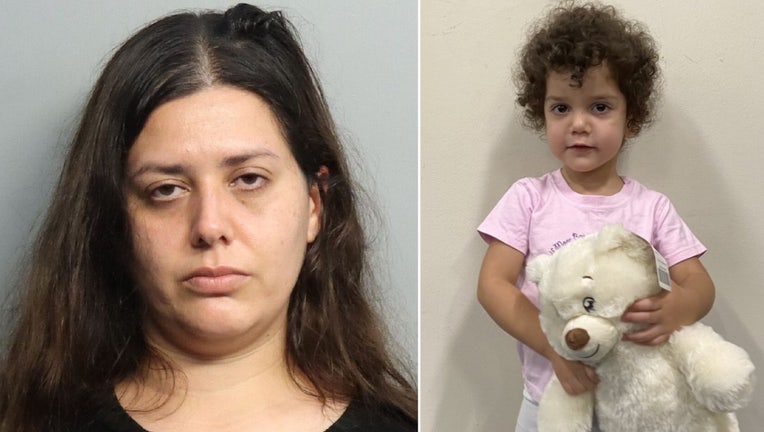 Carolina Vizcarra, left, and the little girl she is accused of abandoning at a Miami hospital (Photos: Miami-Dade Corrections/Miami Police Department)

MIAMI - Authorities in South Florida say they have arrested a mother accused of abandoning her young daughter at a hospital, leaving the little girl with a stranger.

Miami police said 33-year-old Carolina Vizcarra left the toddler, who appears to be about 2 years old, with a man at Mercy Hospital on Tuesday. She told the man she had to go to the restroom, but never came back for the child.

"She hands off the child to this unknown man," spokeswoman Kaina Fallat told news outlets. "Luckily he was a police officer and what was going through his mind was, he went into police mode."

RELATED: Gabby Petito's cause of death ruled strangulation; body was outside up to 4 weeks, Wyoming coroner says

Fallat said the officer immediately called for help when he realized the woman wasn't returning for her.

The Florida Department of Children and Families took custody of the girl, Fallat said.

Police posted the child's image on social media to ask for the public's help to locate her parents. Detectives arrested Vizcarra Wednesday morning.

WSVN reports that after being taken into custody, Vizcarra told police, "It’s not like I just left her. It’s a hospital, and I was worried for her. I was thinking about sleeping on the streets but not her."

Florida’s Safe Harbor law protects parents who leave children in a designated safe space, but only if they’re babies up to seven days old.

Vizcarra is charged with child abandonment and is expected to appear in court later Wednesday afternoon. Her bond has been set at $5,000.