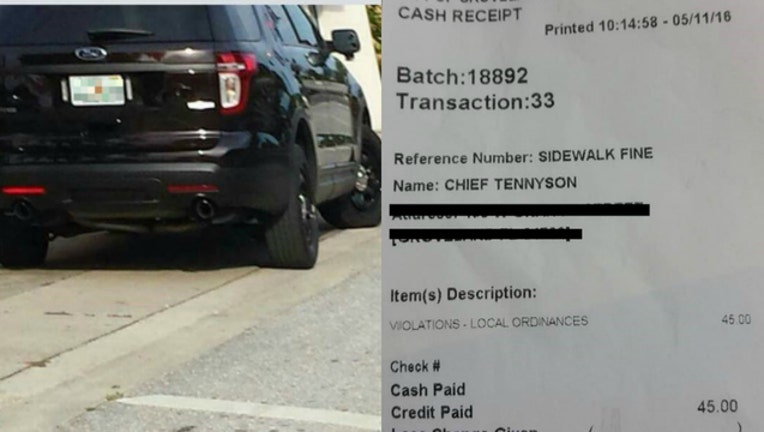 FOX NEWS - When a Florida police chief was called out for blocking a sidewalk with his improperly parked SUV, he responded by doing the only fair thing: writing himself a ticket! Facebook user David Bires posted images of what he alleged to be Groveland Police Department Police Chief Melvin Tennyson's vehicle blocking a sidewalk outside city hall.

Bires pointed out that the department regularly issues tickets to citizens for blocking the sidewalk. The Groveland Police Department soon responded with a Facebook post of their own.

"In response to a previous social media post about the chief of police parking on a sidewalk, let it be known he was made aware of the violation and he issued himself a parking ticket," the post read. "Chief Tennyson has since paid for the violation. Attached is a copy of the receipt and the chief's response and email to the City Manager and City Council."

Tennyson wrote in an accompanying statement that he was running late for a meeting and thought he had parked far enough off the sidewalk. When he was informed that he wasn't, he voluntarily paid the $45 parking violation fee. He explained that he cannot hold anyone accountable if he doesn't hold himself accountable. "I have always said it starts at the top," Tennyson wrote.