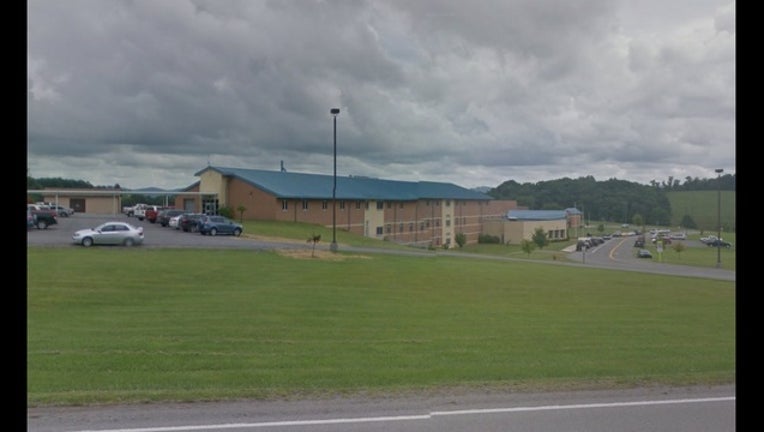 PHILIPPI, W.Va. (AP) - A 14-year-old boy held 29 students and a teacher at gunpoint in a West Virginia high school classroom Tuesday afternoon before he released them after negotiations and surrendered, authorities said. No injuries were reported.

The student took a pistol into a second-floor classroom Tuesday afternoon at Philip Barbour High School in the north-central part of the state, State Police Lt. Michael Baylous said in a statement. It was the ninth day of the new school year in Philippi, a town of some 3,000 residents located about 115 miles south of Pittsburgh, Pennsylvania.

Barbour County Schools Superintendent Jeffrey Woofter credited the teacher for maintaining control when classes were about to change and praised the Philippi police chief for talking the suspect into giving up.

Woofter said the teacher talked the boy into not allowing the next group of students to enter the classroom.

"The teacher did a miraculous job, calming the student, maintaining order in the class," Woofter said, declining to identify the teacher by name.

Students who opened the door to enter for the next class were asked to leave. Those students went across the hall to alert another teacher, who then alerted school officials. An assistant principal raced to the hallway outside the classroom, then called the office asking that police be alerted, Woofter said.

Kayla Smith, a 17-year-old senior, said initially no one in her classroom in another area of the school took a "code red" warning seriously.

"Then we all held hands and said a prayer," she said.

Local authorities got first reports about 1:30 p.m. Tuesday of someone with a gun in the building. Students who weren't in the classroom with the suspect were sent to a football field before they were accounted for and sent home by bus.

Woofter said Philippi Police Chief Jeff Walters negotiated the release of the students from the classroom and eventually got the suspect to surrender a few hours it began.

Barbour County Prosecutor Leckta Poling said she plans to pursue unspecified charges against the suspect, who was taken to a hospital for evaluation. Poling said that because the case involves a juvenile, the court process would be closed. Police haven't identified the student.

Steve Saltis was among several anxious parents who went to the school and waited outside an area cordoned off by police tape for students to be released. Saltis said by phone that his daughter attends the school and that "a lot" was going through his mind while he waited for her to head home.

Saltis said many students had been sitting in the football stadium after the school was evacuated and that he was able to talk to his daughter. But Saltis said law enforcement officials told parents nothing while the suspect was still in the school.

"I think that's the scariest I've been in a long time," Saltis said later.

Woofter, a former sheriff who began his new job as schools superintendent in July, credited parents for heeding police warnings to stay away from the school.

"In such a trying time, I was just amazed at our parents and how everybody responded to the situation," Woofter said. "I just thank God everybody is safe and hopefully we'll never have a repeat of that again."

State Police Capt. Dave Reider said there will be an increased law enforcement presence at the school on Wednesday when classes resume. He said the school will be open but the start of classes will be delayed by two hours.