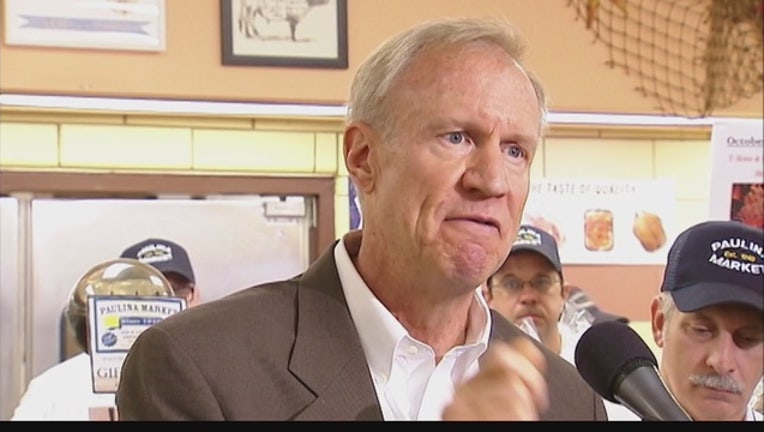 CAIRO, Ill. (AP) — The only public health clinic in Illinois' poorest county is in a former synagogue off a largely abandoned main street, a bright spot with multicolored windows where seniors can get flu shots and moms get help feeding their kids. But today the lights are off and the doors locked. A sign on the door apologizes for the inconvenience: Because of the impasse over the state budget, we are only open on Wednesdays.

A few blocks away half the sheriff's department has just gotten pink slips. Counselors at the only place to get mental health care in miles are working for free as the waiting list for help grows. And about 20 miles up the road from Cairo, Illinois' southernmost tip, the man in charge of keeping highways clear this winter can't afford to buy road salt, but figures he wouldn't be able to pay drivers to spread it anyway.

For many people in Illinois, the five-month disagreement over a state budget has been barely a blip on the radar, a sideshow of political wills between a new Republican governor and a heavily Democratic legislature.

But for residents in the low-income counties tucked between the Mississippi and Ohio rivers — a mix of farmland and forest where Southern accents are more common than stop signs — it's a far different story. Here people and private industry are scarce and getting scarcer, and residents rely on government for everything from health care to jobs and feel the impact severely when the public sector falters.

In a recent Southern Illinois University poll, nearly 30 percent of people in this southern section of Illinois said they or an immediate family member has been personally affected by the budget fight; one in 10 say they've lost or face the threat of losing a job.

"A lot of people are hurting," says Nancy Holt, the director of the Southern Seven Health Department, which is responsible for everything from immunizations to infant nutrition and restaurant inspections in the seven counties, though most of its employees only are working one day a week. "The most frustrating part is there's nothing we can do about it."

GOP Gov. Bruce Rauner took office this year with promises to make Illinois more attractive to businesses and create more new jobs. The former private equity investor insists he won't sign off on a tax increase to close a roughly $5 billion budget hole until Democrats and labor unions give in to some of his demands.

But Democrats have refused, saying curbing union powers will hurt the middle class. No one expects the standoff to be resolved before 2016.

Though there's no budget in place, some bills are being paid through court orders and state law. Lawmakers and state employees are collecting their salaries, and schools and most government offices remain open. But local governments aren't getting their share of gasoline taxes or state gambling receipts. Human service agencies that contract with Illinois aren't getting paid or are getting partial payments months late.

Wealthier communities with a stronger property tax base and cash reserves have gotten by, though even they are warning of serious consequences ahead.

Many places in the state's poor southern region, however, have no cushion.

In the seven counties, vacant homes and boarded up storefronts show the impact of factory closings years ago, which have left the region with the state's highest unemployment rate. In Cairo, one of the most robust businesses is demolishing the shells of historic buildings to salvage bricks for resale.

Roughly one-third of the workforce is employed by state or local government — more than double the statewide percentage, according to the Illinois Department of Employment Security. That's meant people aren't just losing the services of agencies affected, they're losing the jobs.

For Alexander County — where one-third of residents live in poverty — the loss of roughly $55,000 in state money per month came on top of a $1.6 million deficit this fiscal year.

On Oct. 1, the county board laid off half its workforce of 20. That included seven of 13 people in the sheriff's department and a staffer in the state's attorney's office.

The Delta Center, a local mental health care and substance abuse counseling provider, closed in August. The nearby Family Counseling Center took on about three-fourths of its more than 300 clients, but director Sherrie Crabb has so far had to lay off 37 staff, including herself. The state owes Family Counseling Center at least $1 million for services already provided, and while most staff still come to work Crabb isn't sure how long they can continue.

"I don't know what January or February or even December will hold," she said.

The uncertainty worries clients such as Tiffanie Baker too, who sought counseling after the deaths of her husband, father and grandparents, her daughter's serious car accident and the loss of her own vision.

"I don't know what I'll do if they're not around," Baker said. "There is nowhere else."

There is plenty of blame to go around, people say, as they watch Rauner and the legislative leaders duke it out as if they're campaigning rather than negotiating. Lawmakers, they note, meet at the Capitol only every few weeks.

Though the region supported Rauner in the last election, residents are divided over the dispute. Located so close to the borders of Missouri, Kentucky and Indiana, these areas could benefit from the changes Rauner is pushing. According to Alexander County Board Chairman Chalen Tatum, businesses his county recruits often choose to locate instead across the river, where workers' compensation costs, wages and property taxes are lower.

But the area is also heavily unionized, and that loyalty is fierce among people who firmly believe that government — no matter who's in charge — doesn't care about them.

In Cairo, population 2,700, the only grocery is set to close in December. Only one of the six gas stations that were here a few years ago is still open.

"It's just a war, and it seems like we're losing," Tatum said.

This story has been corrected to say that Cairo's only grocery story is set to close in December, rather than that it has already closed.