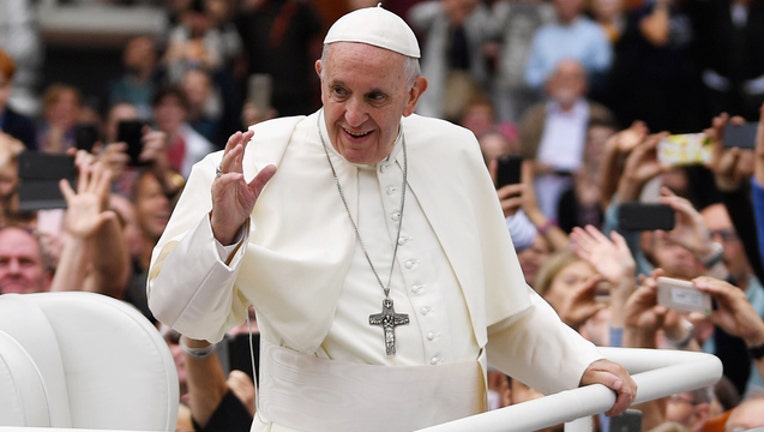 Pope Francis greets the public as he travels through the city in the Popemobile on August 25, 2018, in Dublin, Ireland. (Photo by Jeff J Mitchell/Getty Images)

VATICAN CITY (AP) -  Pope Francis compared abortion to a mafia-style killing Wednesday, saying it's the equivalent of hiring a hit man to "take out a human life to solve a problem."

Francis made the comments, among his strongest yet against abortion, during his weekly Wednesday audience dedicated to the commandment exhorting the faithful not to kill.

Francis said some people justify abortion as respecting other rights. But, he asked, "How can an act that suppresses innocent and defenseless life as it blossoms be therapeutic, civil or simply human?"

It was the second time within recent months that Francis has expressed the church's longstanding opposition to abortion in violent, stark terms.

In June, Francis denounced how some couples resort to pre-natal testing to see if their unborn babies have malformations and then choose to have an abortion, which he said was the "white glove" equivalent of the Nazi-era eugenics program.

Francis has framed both abortion and euthanasia as part of what he calls today's "throwaway culture," where the sick, the poor, the elderly and the unborn are considered unworthy of protection and dignity by a society that prizes instead individual prowess and success.

Official church teaching opposing abortion is absolute, providing for no exceptions. That said, Francis has acknowledged that women sometimes are driven by circumstance to abortion and he has extended the ability of ordinary priests - and not just bishops - to absolve them of the sin of abortion if they repent.

Francis' comments came during a three-week meeting of bishops from around the world on young people, where sexuality, including premarital sex, is among the topics of discussion.

Catholic teaching on abortion has been in the headlines lately, including during the divisive confirmation process of U.S. Supreme Court Justice Brett Kavanaugh, a Jesuit-educated Catholic whose vote could overturn legalized abortion in the U.S.

In addition, senators in Argentina rejected a bill in August that would have legalized the procedure in Francis' home country.