Pritzker calls for national mask mandate: ‘This is not a reality TV show’

Governor JB Pritzker testified Wednesday to the US House Committee on Homeland Security and called for a national mandate for all Americans to wear masks amid the coronavirus pandemic.

CHICAGO - While coronavirus cases are surging in dozens of states, Illinois’ count remains low and Governor JB Pritzker is working feverishly to offer even more testing.

The United States has now topped 3 million COVID cases and while Illinois has been fairly steady or declining, the Land of Lincoln saw a jump in cases on Wednesday.

Still, Governor Pritzker has some advice for the feds.

“We need a national masking mandate. We instituted ours in Illinois May 1 and it aligns with significant downturns in infection rate,” Pritzker said.

The governor testified Wednesday to the US House Committee on Homeland Security and was still critical of President Donald Trump's handling of the pandemic.

“In the midst of a pandemic, states were forced to play some sick 'Hunger Games' game show to save the lives of our people. Let me be clear, this is not a reality TV show,” Pritzker said.

Pritzker told the committee he wants to see a nationwide containment strategy that would include testing and contact tracing and more federal funding for states.

“In addition to the hundreds of testing sites, we now have 12 mobile teams,” the governor said. 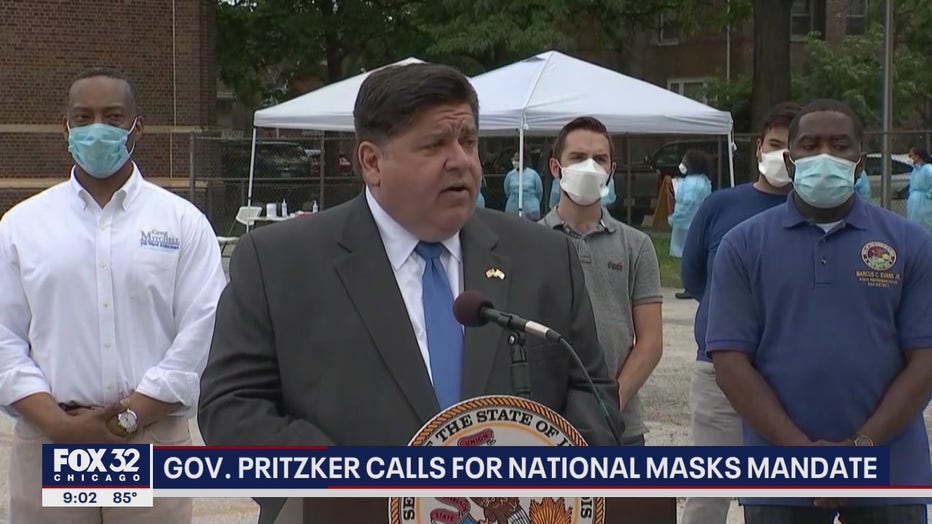 The teams will travel across the state where they are needed if there is a sudden surge.

Governor Pritzker says efforts like these have helped our COVID numbers decrease.

An uptick in cases Wednesday may be due to delays form the Fourth of July, with Illinois reporting 980 new cases, 36 additional deaths and the state’s positivity rate still at 2.6 percent.

The governor says while yes Illinois’ numbers are encouraging, he reminds us that COVID is not going away. There are new projections out that estimate we could see more than 200,000 deaths in the US by November.