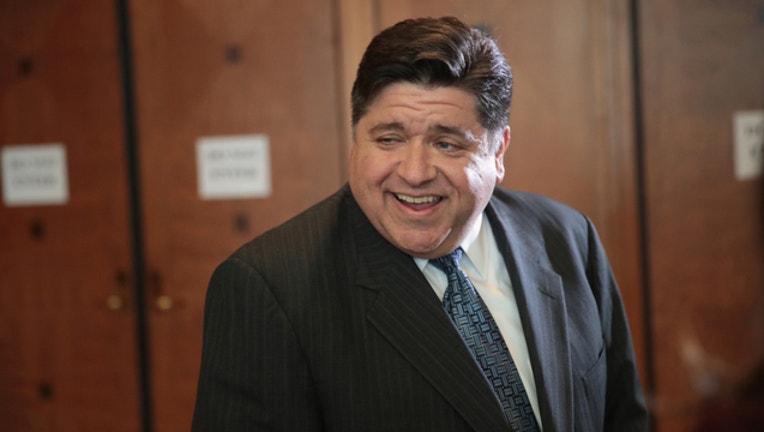 SPRINGFIELD, Ill. (AP) - New Illinois Gov. J.B. Pritzker proposed a budget Wednesday that relies partly on tax revenues from two industries that currently aren't even legal in the state, which is saddled with billions of dollars in pension obligations and other debts.

Pritzker's $39 billion proposal includes more than $1 billion from legalizing recreational marijuana and sports betting, while also imposing a tax on insurance companies, hiking cigarette and e-cigarette taxes and raising $20 million from a tax on plastic bags.

The Democrat, making his first major address to legislators just five weeks into the job, also wants to modify the albatross of the state's $134 billion in pension debt. He's seeking to borrow money through bond sales, sell state assets, use extra money from a proposed income-tax revamp and stretching out those obligations by seven years. Under his plan, those debts would be paid off by 2052 instead of 2045.

Years of underfunding pensions has pushed this year's obligation to $9 billion.

"The budget I present to you today is an honest proposal," Pritzker told lawmakers. "The costs are not hidden, the revenues I propose are not out of reach, the hole we need to fill is not ignored."

He said the plan "reflects some of my most deeply held values - and the hopes of voters who sent us here - but tempered by the knowledge that we must hold the line on spending."

Pritzker has said that legalizing recreational cannabis could generate as much as $1 billion in tax revenue a year. If approved this spring, the next budget would include $170 million in start-up distributors' licensing fees. But he said there would be more than a fiscal impact.

"We should take this action for our state because of the beneficial criminal and social justice implications and the jobs it will create," Pritzker said. "And let's be honest, like it or not, cannabis is readily available right now. I would rather the state tax it and regulate it."

Sports betting, allowed by a recent U.S. Supreme Court ruling, also could be lucrative for Illinois, although there are plenty of Midwestern states looking to get involved. Pritzker also proposed $390 million in revenue from a tax on insurance companies, specifically managed care organizations to help cover the state's Medicaid program costs. There would be $65 million more in taxes on cigarettes and e-cigarettes and closures and caps on corporate loopholes and discounts.

"We heard a lot in his speech about more spending, more tax increases and concepts tried in the past," said Senate Republican Leader Bill Brady of Bloomington. "If we are going to put Illinois on a path forward, then we need to learn from history, not repeat it."

Reporters were briefed on the details after the speech by deputy Gov. Dan Hynes and Pritzker budget director Alexis Sturm, but the governor's press office prohibited reporters from quoting the two directly. The Associated Press chose not to participate.

The governor touted the minimum wage plan he signed into law this week and said he would begin negotiations immediately to develop a plan to replace the flat-rate income tax system with a graduated tax, requiring a greater percentage of income from wealthier taxpayers.

But that can play no role in the budget year that begins July 1. It would require voter approval to change the Constitution, and the earliest the question could be put on the ballot would be in November 2020.

Pritzker began his speech asking for a moment of silence for the people killed and wounded in the Aurora warehouse shooting last Friday.