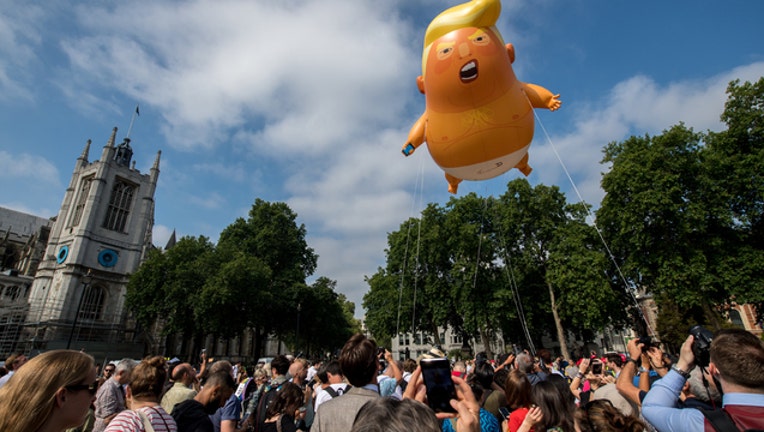 LONDON - (AP) -- Thousands crammed the streets of central London on Friday to vent their anger over Donald Trump's first official visit to Britain, blowing horns, waving banners and hoisting a bright orange effigy of the U.S. president on their shoulders

Filing past palaces of high-end commerce — Apple, Burberry, Brooks Brothers — marchers criticized Trump's policies on immigration, climate change and torture, as well as his treatment of women. Some carried more than one placard, unable to choose which policy they hated the most.

The Rev. Nigel Sinclair, 53, a church of England preacher, came in what he called his Sunday vicar's outfit, carrying a sign that showed how Trump's ideas differ from those of Jesus Christ. Susie Mazur, 29, from Salisbury in southwestern England, crocheted a Donald Trump pin-cushion and wore it on her head, winning praise from protesters who wanted one for themselves.

"People coming here nowadays feel very hopeless about what is happening. They don't like what is happening in the U.K., in America, across the world — there are so many problems," Mazur said. "Everyone has the same goal: What they want is to stop hate, basically."

As Trump met with Prime Minister Theresa May at her country retreat outside the city, the protesters gathered outside embassies, offices and homes carrying signs that read, "Human rights have no border," and "Mother Earth unites us," before marching past the shops of Regent's Street on their way to Piccadilly Circus and finally Trafalgar Square, which the city calls a "center of national democracy and protest."

Not everyone was protesting against Trump, however.

Augustine Chukwuma Obodo, who wore a "Make America Great Again!" hat and a "Trump for President in 2020" shirt, said he wanted to make clear that not everyone found the protests amusing. Obodo, a Nigerian living in London, said he wanted to add his voice to those who are quieter, but believe Trump is doing a good job on issues such as pushing NATO members to increase their defense spending.

"America is not a cash point," he said.

The day began with a giant balloon that caricatured Trump as a screaming orange baby flying outside the Houses of Parliament. The diaper-clad infant, with a quiff of hair and a mobile phone for tweeting, was the centerpiece of demonstrations.

"Depicting Trump as a baby is a great way of targeting his fragile ego, and mocking him is our main motivation," said Matthew Bonner, one of the organizers of the balloon flight. "He doesn't seem to be affected by the moral outrage that comes from his behavior and his policies. You can't reason with him, but you can ridicule him."

Hundreds crammed Parliament Square to take in the spectacle. Deborah Burns, 43, of Newcastle in northern England, brought along her 10-year old daughter, Monica Siddique. Both were pleased.

"I think it's a good way to stop Trump from being mean to the rest of the world," Monica said of the balloon. "He says, 'Oh, this is a free world.' But then he goes and builds walls. ... He acts like a baby."

Some Americans living in London came to see the balloon, wearing the Stars and Stripes draped over their shoulders. Other spectators just came to take pictures as the balloon floated overhead for two hours.

"It's a very British way of protesting — we don't like to throw stones," said Phil Chapman, 59, of Hayfield, a village in Derbyshire. "It's far easier to protest in a pleasant way. If you can do that with humor, you will get more attention."

Trump criticized London Mayor Sadiq Khan, who refused to prevent the balloon from flying, in an interview published Friday.

Khan, who has been a target of Trump's ire before, said his job was to make sure the protests were peaceful, not to be a censor or the "arbiter of good taste."

"The idea that I would stop a blimp or a balloon flying over London because it may cause offense, and thereby curtail the rights people have to protest when it's not unsafe, it's not unpeaceful, I think people would find a bit astonishing," Khan told the BBC.

Anger over Trump's visit has been simmering ever since May invited the president for a state visit just a week after his inauguration last year. The event, which would normally include glittering horse-drawn carriages and a state dinner hosted by the monarch, morphed into a two-day "working visit" with much less pomp and circumstance amid concern about security and crowds in central London.

Trump avoided the protests by largely avoiding the capital. After a black-tie dinner 60 miles (100 kilometers) outside London, he spent Thursday night at the U.S. ambassador's residence in Regents Park, then flew by helicopter to May's country retreat, Chequers, for his meeting with the prime minister, followed by another flight to Windsor Palace for tea with Queen Elizabeth II.

A march in support of Trump will start at the U.S. Embassy on the south bank of the River Thames and end near the prime minister's residence at Downing Street on Saturday. But on Friday, the crowds belonged to those who oppose his policies.

Carrying placards reading "Dump Trump," and "Can't comb over sexism," the boisterous crowds blew whistles before starting off on their march.

Phil Bond, 65, a musician, said he knows it is unlikely that the demonstrations will make any difference to Trump, but he believes people in the United States will notice.

He said he just wanted to add "my little drop of water to the 50 gallons."

"If enough people come out, it might make a difference," he said.