On a night known for heavy drinking, protesters stood outside a Chicago bar.

CHICAGO - On a night known for heavy drinking, protesters stood outside a Chicago bar.

The popular River North nightclub, El Hefe, is the target of a lawsuit by a woman who says she was sexually assaulted in a back alley, as security guards did nothing.

The case was in court today for an emergency hearing.

Protesters said Wednesday that it’s time for Chicago nightclubs to change their ways.

“Tonight we are here as a call to action for the bar and restaurant industry to stop being complacent when sexual violence happens to its costumers,” said Sarah Layden. 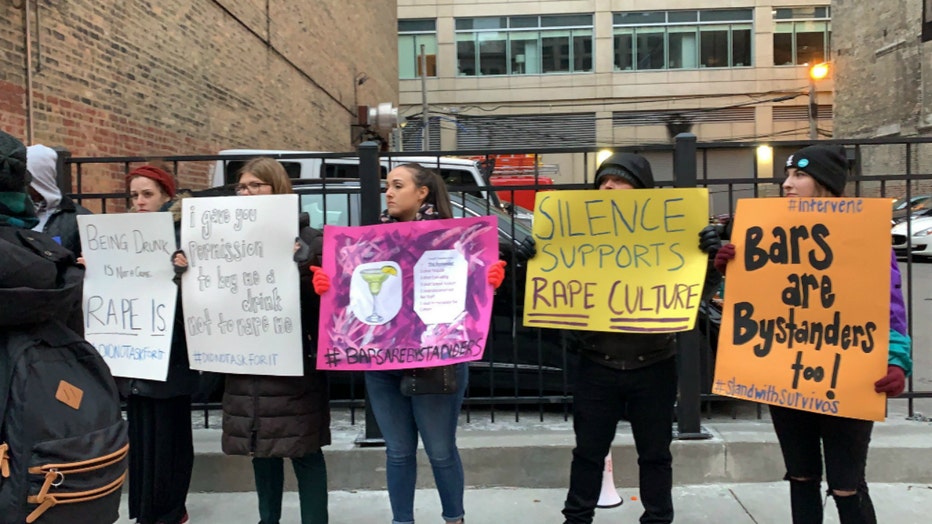 The protest comes as a woman sues El Hefe for negligence. The 23-year-old Texas woman believes someone slipped her something inside the bar in October.

Surveillance video shows a man pulling her by her neck, out a back door, into the alley, right past El Hefe security guards. Police say the woman was sexually assaulted by a dumpster and left outside unconscious as the man talked to the guards and walked back inside.

“I am 100 percent confident that someone in this bar knows who this individual is,” said John Chwarzynski, Attorney. “Nobody is allowed to go out the back alleyway unless you know somebody.”

The woman’s lawyers are forcing the place to preserve pictures, posts, staffing information and more from that October night. Already, the bar says it doesn’t have surveillance video on its servers.

“We can have our experts take a look at that and retrieve those videos which they have allegedly said no longer exist,” said Chwarzynski.

As this case shines attention on El Hefe, the victim’s attorneys say they’re hearing from other women who believe they were somehow incapacitated at the same nightclub.

“It's important as a community to understand and learn what's going on and what's happening out there in River North, on Hubbard Street, in Chicago,” said Brian Monico, Attorney. “In the 12th District, we need to know these things and be safe."

El Hefe now has about a month to turn over evidence from the night of the assault as both police and the victim's lawyers try to find the attacker.