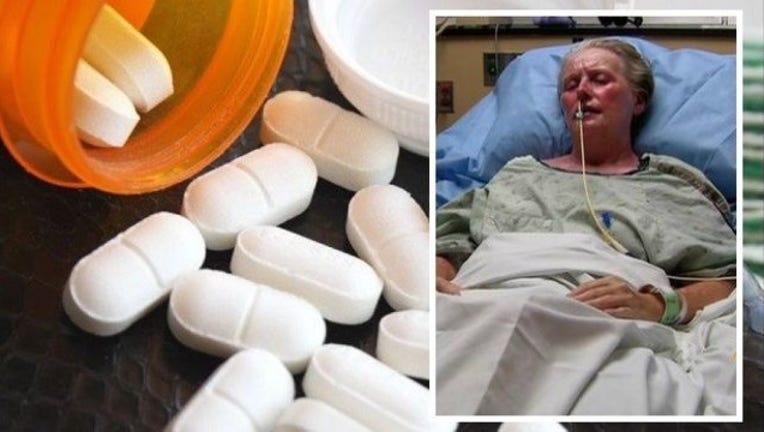 FOX News -- An Indiana woman was feeling sick during a vacation, took Tylenol, and ended up with burns to 40 percent of her body as a side effect, WSMV reported.

Donna Emley, of Fort Wayne, Indiana, was diagnosed with Stevens-Johnson syndrome and sent to the burn unit at Vanderbilt University Medical Center in Nashville. She had been vacationing near Bowling Green, Kentucky.

"My eyes and face were swollen, and I had a rash all over my trunk," Emley told WSMV.

Emley is now fighting to keep her eyesight. Her husband, Dennis Emley, said doctors have put amniotic membranes in her eyes. Amniotic membranes have anti-inflammatory and anti-scarring effects, and contain growth factors that promote wound healing on the eye surface, according to a 2011 Dutch study.

Stevens-Johnson syndrome is extremely rare. According to the Mayo Clinic, it often begins with flu-like symptoms, followed by a painful red or purplish rash that spreads and blisters. The top layer of the affected skin dies and sheds. Usually, the diagnosis comes as a reaction to medication or an infection.

"This isn't something people should be worrying about who are taking ibuprofen," Dr. Buddy Creech, an infectious diseases researcher at Vanderbilt, told WSMV. "Sometimes it takes these uncommon side effects that are devastating to remind us that over-the-counter drugs like ibuprofen must be taken with caution."

Researchers advised that consumers be vigilant about drugs like Motrin and Advil (which contain ibuprofen) and Tylenol (which contains acetaminophen) because possible side effects include nausea and gastrointestinal bleeding.

WSMV reported that the Food and Drug Administration (FDA) recently called for new warnings on painkillers like ibuprofen, saying these over-the-counter drugs raise the risk of heart attack or stroke.