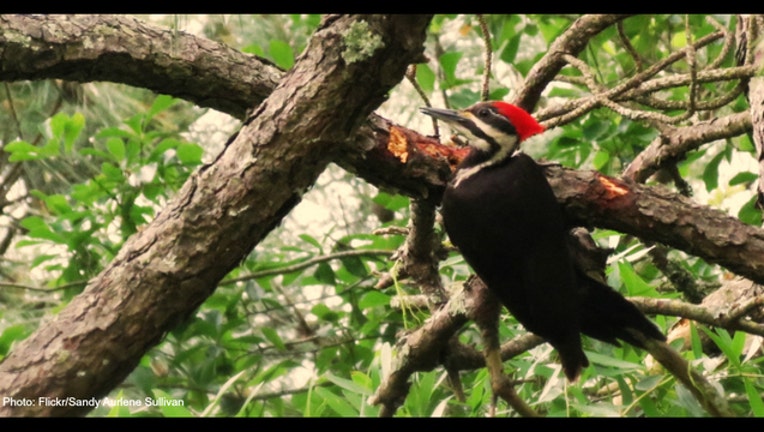 Have you seen this woodpecker? More of these pileated woodpeckers are moving to the Chicago suburbs, because their favorite snack is moving here, too.

The pileated woodpecker has been seen and heard fairly regularly for the past month or so on the east side of the Morton Arboretum in Lisle, John Cebula of the DuPage Birding Club told the Naperville Sun. The species also has been spotted near Naperville and other spots around the county, Forest Preserve District of DuPage County ecologist Brian Kraskiewicz reported.

More pileated woodpeckers are moving into the area because it has plenty of dead or dying ash trees, which have been ravaged by the pesky emerald ash borer, according to experts.

The weakened trees provide the ideal home for the species because they offer a place for them to excavate and build a nest, as well as a beetle buffet.

In the DuPage County forest preserves, pileated woodpeckers have been spotted "pecking away" on trunks and stumps, Kraskiewicz said.

Pileated woodpeckers leave rectangular holes in the wood, and have a loud, whinnying call, according to Cornell Lab of Ornithology at Cornell University in Ithaca, New York. The species also drums on dead trees in a "deep, slow rolling pattern."

Woodpeckers are known to occasionally visit suburban backyard birdfeeders, but it's not a common occurrence, said Rob Rohrbaugh, assistant director of conservation science at the Cornell lab.

"Put out a bird feeder. You'd be amazed at what birds live in urban and suburban areas," he said. "If you get a pileated, that would be a bonus."