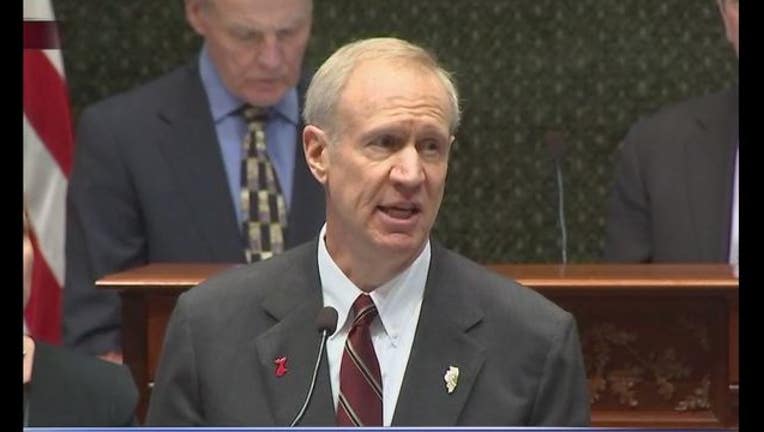 Rauner told the General Assembly during an afternoon budget address that spending cuts "need to be real - no smoke and mirrors" and insisted his plan would balance the budget. However, as it stands, it would leave a $7 billion hole without matching revenue.

If enacted as introduced Wednesday, the state would spent nearly $40 billion, 22 percent more than the $33 billion in revenue the plan counts on, according to budget documents released after the speech.

Sidestepping specifics, Rauner used his third budget presentation to signal his willingness to accept tax increases. He struck an upbeat tone, praising "real progress" the Senate had made in negotiating a compromise plan. It addresses regulatory changes Rauner has demanded for two years but also an income-tax increase to slice into a multibillion-dollar deficit.

Skittish lawmakers staring down a Senate tax vote had urged the governor to weigh in. Rauner said that, as a guideline, he's open to a tax on services, such as car repairs or haircuts, but would nix increased taxes on food, medicine or retirement income.

"There is no one single bullet, no one single 'must have,' for our administration," Rauner said. "But for the future of our state, change must be real, not just a newspaper headline."

But Democrats who hold majorities in both the House and Senate were unimpressed.

"There was no real meat in what he was saying today," complained Rep. Greg Harris, a Chicago Democrat and House budget negotiator. "We heard he plans to spend much more money."

Illinois has been without a budget since July 2015, two months after Rauner took office, the nation's longest state budget stalemate in nearly a century.

Recalling the length of the stalemate, rife with accusations on both sides, Rauner said: "This isn't about pointing fingers or assigning blame. " That prompted a round of laughter from Democrats in the chamber.

Rauner has insisted that a budget agreement include regulatory and political changes such as cost-cutting restrictions on workers' compensation and term limits for officeholders. The Senate plan includes some of his priorities, but also an increase in the personal income tax rate to 4.99 percent from 3.75 percent.

He said he wants a permanent property-tax freeze, not one limited to two years as the Senate suggests. He said that's only fair if lawmakers approve a permanent increase in the personal income tax rate from 3.75 percent to 4.99 percent.

Even without an annual spending plan, state government continues to operate largely because of court orders and intermittent appropriations by lawmakers.

But the picture is bleak. Without action, Illinois will have a $5.3 billion deficit when the current fiscal year ends June 30. There is a backlog of $11 billion in overdue bills. State pension programs are $130 billion short of what they need to pay promised benefits to retired and current employees.

Rauner proposes spending of $37.3 billion, but only after saving $2.5 billion with changes to state-employee health insurance, selling the James R. Thompson state office building in Chicago, making procurement more efficient and other changes - most of which requires legislative approval.

And if he achieves those cuts, there's still a hole of $4.6 billion. Budget director Scott Harry says the governor hopes that will be covered, with help from the Legislature, by economic growth, more spending cuts, and tax increases that come out of the Senate compromise.

"The final result must be a good deal for taxpayers and job creators; a grand bargain that truly balances the budget once and for all, and really moves the needle when it comes to job creation," Rauner said.

Associated Press writers Kiannah Sepeda-Miller in Springfield and Sara Burnett in Chicago contributed to this report.