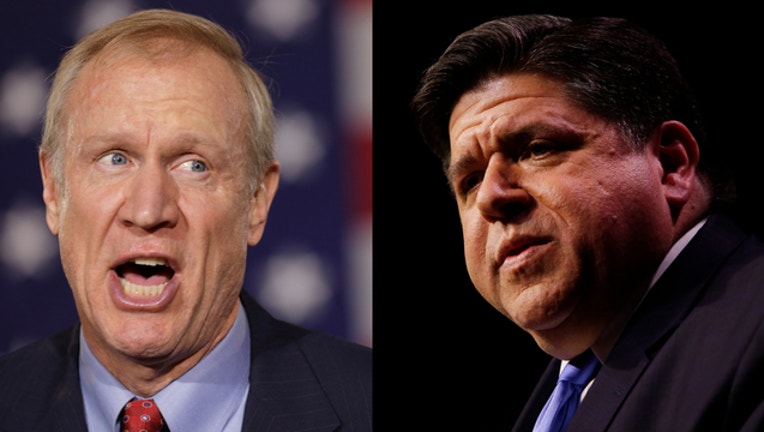 QUINCY, Ill. (AP) - Illinois' candidates for governor again traded accusations over leadership, taxes and alleged corruption in a debate Thursday that was their final one to be televised before the Nov. 6 election.

Republican Gov. Bruce Rauner and Democratic challenger J.B. Pritzker both tried to deflect attention from questions about their integrity.

The debate played out on a sensitive stage - Quincy, home of the state-run military veterans' home beset by a deadly Legionnaires' disease crisis. Rauner decried a criminal investigation by the Democratic attorney general into his handling of the outbreak that has led to 14 deaths since 2015, calling it a "shameful abuse of power."

Pritzker is struggling with his own problems in the form of an investigation that declared he engaged in a "scheme to defraud" property taxpayers by misrepresenting how he was renovating a Chicago mansion. The billionaire businessman accused Rauner, a wealthy former private-equity investor, of putting personal and political interests above public safety by mismanaging the Quincy crisis and other matters.

Rauner has been sharply criticized for his handling of the Legionnaires' situation and whether his administration notified the public in a timely enough manner, which has become the focus of the criminal investigation launched last week by Democratic Attorney General Lisa Madigan, who's not seeking re-election.

"Much of this so-called criminal investigation is a political ploy to divert attention from the tax fraud that Mr. Pritzker engaged in, and it's a shameful abuse of power by the attorney general," Rauner said.

Pritzker, the heir to the Hyatt hotel fortune, said he followed the rules in his family's renovation of a mansion it owns and did not mislead tax authorities by pulling toilets so the home could be declared technically uninhabitable. The declaration saved Pritzker $330,000 in property tax breaks, which he announced he would repay by the end of this week after the fraud allegation was made in a report by the Cook County inspector general.

He scoffed at Rauner's claims to have created 211,000 jobs and cut red tape for businesses, and his promise to create the largest capital-construction plan in state history. Pritzker pointed out that Rauner presided over a two-year state budget stalemate with Democrats who control the Legislature, negatively impacting social services, higher education and other areas of the economy.

"The governor made all these promises four years ago," Pritzker said. "He's living in a state of denial, the rest of us are living in the state of Illinois."

He said Rauner has never called on U.S. Sen. Dick Durbin, an Illinois Democrat and leader on Capitol Hill, for help from Washington. Pritzker also used the lone debate outside of Chicago to criticize Rauner for not standing up to Republican President Donald Trump on tariffs and the way they negatively affect Illinois soybean farmers.

Rauner continued pressing Pritzker on his plan to replace the state's flat-rate income tax with a graduated plan, making wealthier taxpayers pay more. When Pritzker was asked how a Peoria public school teacher making $51,000 would fare under his plan, he said the teacher should get a tax break. And Rauner pounced.

"He won't answer because he knows the middle class is going to get crushed," Rauner said.

Rauner has labeled it a plan to raise taxes statewide and claims that Pritzker and powerful House Speaker Michael Madigan, the Chicago Democrat who has served as foil to Rauner's conservative agenda since 2015, have a plan to increase spending by $11 billion. That would be an increase in state spending of nearly 30 percent.

Pritzker has contributed nearly $150 million of his own money with hopes of becoming the third Democratic governor in Illinois in 16 years. Rauner also has self-financed, but after nearly single-handedly keeping the state's Republican Party afloat financially since before his 2014 election, he hasn't chipped in on his own behalf since a $50 million contribution in late 2016.