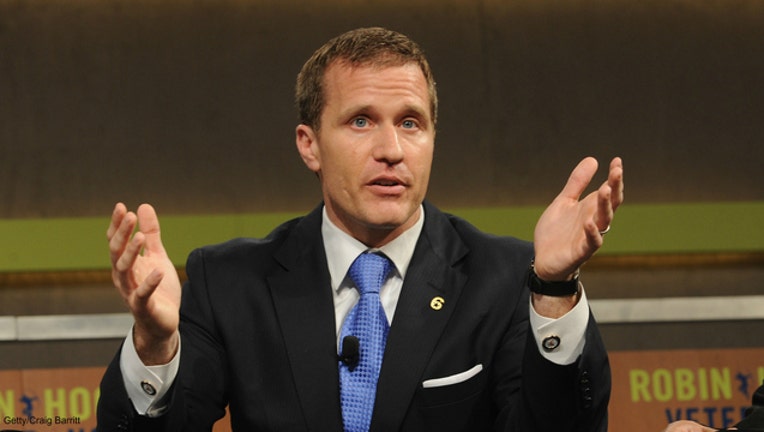 NEW YORK, NY - MAY 07: Missouri Governor Eric Greitens was Founder and CEO of The Mission Continues. He spoke at the Robin Hood Veterans Summit at Intrepid Sea-Air-Space Museum on May 7, 2012 in New York City. (Photo by Craig Barritt/Getty Images)

JEFFERSON CITY, Mo. (AP) - In his first interview since acknowledging an extramarital affair, Missouri Gov. Eric Greitens said Saturday that there was "no blackmail" and "no threat of violence" by him in what he described as a months-long "consensual relationship" with his former hairdresser.

Greitens told The Associated Press that he has no plans to resign from office as a result of the affair, despite calls to step aside from several Republican and Democratic state lawmakers.

"I'm staying. I'm staying" he said twice for emphasis, adding about his relationship with his wife, staff and supporters: "We're strong."

Greitens has remained out of the public eye since shortly after delivering his State of the State address on Jan. 10. Later that night, St. Louis television station KMOV reported that Greitens had an extramarital affair in 2015 as he was preparing to run for governor.

The report included an audio recording of a conversation between a woman and her then-husband - recorded secretly by the husband - in which the woman said Greitens had bound her hands and blindfolded her, taken a photo of her partially nude and warned her to remain silent during an encounter in his home.

Grietens did not directly say "yes" or "no" when asked Saturday if he had bound and blindfolded and taken a photo of the woman. But he firmly denied that he had attempted to coerce the woman.

Greitens added: "The mistake that I made was that I was engaged in a consensual relationship with a woman who was not my wife. That is a mistake for which I am very sorry."