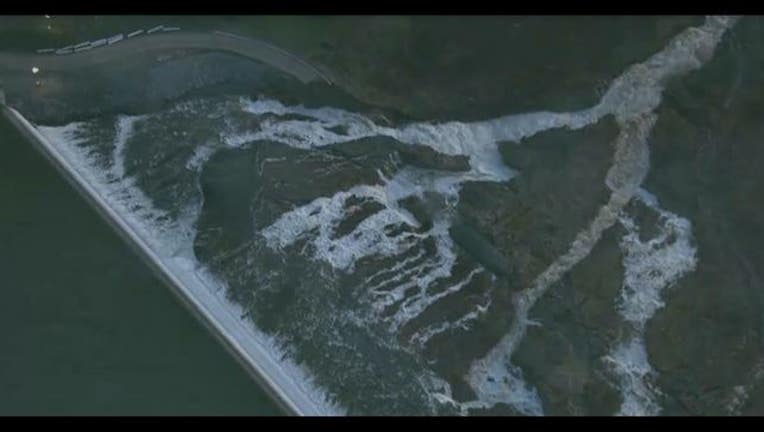 OROVILLE, Calif. (AP) -- Officials have ordered residents near one of the nation's biggest dams to evacuate the area, saying a "hazardous situation is developing" after an emergency spillway severely eroded.

The emergency spillway of the Oroville Dam in Northern California could fail within an hour unleashing uncontrolled flood waters from Lake Oroville, the California Department of Water Resources said on Sunday afternoon.

People in downstream areas need to leave the area immediately, the department said.

Officials earlier Sunday stressed the dam was structurally sound and said there was no threat to the public.

Residents of Oroville, a town of 16,000 people, should head north toward Chico, and other cities should follow orders from their local law enforcement agencies, the Butte County Sheriff's office said.

The Yuba County Office of Emergency Services asked residents in the valley floor, including Marysville, a city of 12,000 people, to evacuate and take routes to the east, south, or west and avoid traveling north toward Oroville.

The California Department of Water Resources said it is releasing as much as 100,000 cubic feet per second from the main, heavily damaged spillway to try to drain the lake.

Water began flowing over the emergency spillway at the Oroville Dam in Northern California on Saturday for the first time in its nearly 50-year history after heavy rainfall.

Unexpected erosion chewed through the main spillway earlier this week, sending chunks of concrete flying and creating a 200-foot-long, 30-foot-deep hole that continues growing. Engineers don't know what caused the cave-in, but Chris Orrock, a spokesman for the state Department of Water Resources, said it appears the dam's main spillway has stopped crumbling even though it's being used for water releases.

About 150 miles northeast of San Francisco, Lake Oroville is one of California's largest man-made lakes, and the 770-foot-tall Oroville Dam is the nation's tallest. The lake is a central piece of California's government-run water delivery network, supplying water for agriculture in the Central Valley and residents and businesses in Southern California.