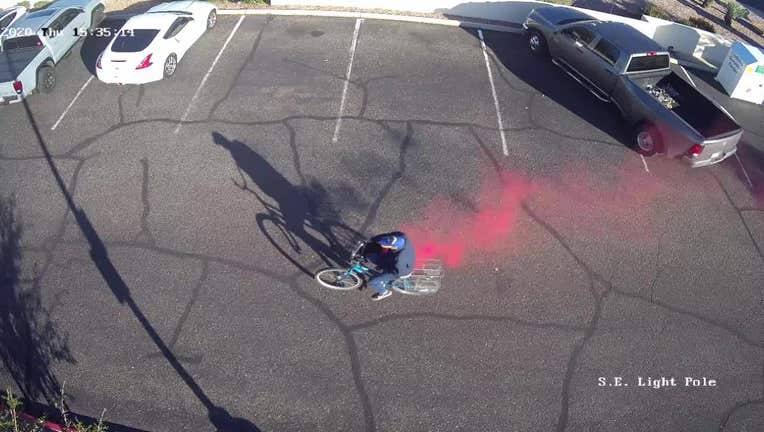 The bank robbery, according to Glendale Police officials on Friday, happened on the afternoon of January 2, when the male suspect entered a bank near 55th Avenue and Bell Road, and demanded money from a teller.

The man, police say, stated he had a weapon, and he had a bulge on his left waistband area, but a weapon was not displayed.

After getting the money, police say the suspect ran through the parking lot to a bicycle, and rode the bike to a truck that was parked in the rear parking lot. As the suspect was riding the bike, there was a pink trail seen emanating from the bike, which police say came from the contents of a dye pack that was attached to stolen cash and subsequently exploded.

The suspect is described by police as a man in his mid-40s, 5'10" tall, and weighing 240 lbs. He was last seen wearing a purple limited edition "Napa" hat with gold trim, black jacket with a small white emblem, jeans, black Nike running shoes, aviator sunglasses, and a black drawstring backpack.