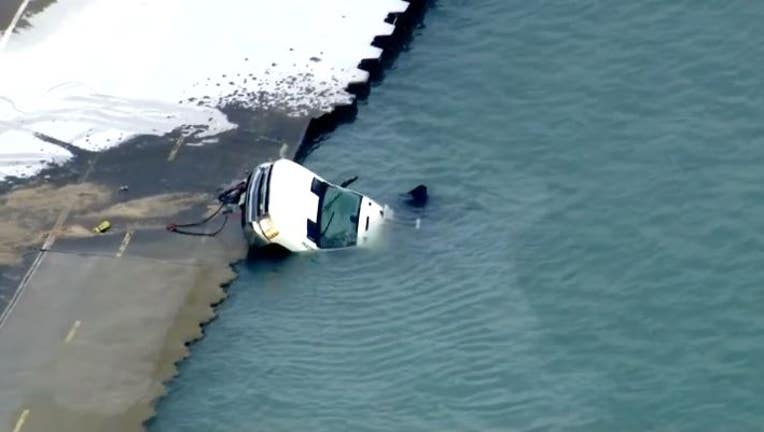 The Park District truck was traveling on the lakefront trail about 7:20 a.m. when it fell into the water near Chicago Avenue, Chicago Fire Dept. Deputy District Chief Jason Lach said in a news conference.

“They hit a slick spot of ice and the vehicle lost control, sliding into the water,” Lach said.

The occupants escaped and crawled to safety before the truck was submerged, he said.

One man, 46, was treated for a busted lip at Northwestern Memorial Hospital, Chicago police said. The other man, 45, refused medical treatment.

The salt truck was one of four or five Park District salt trucks assigned to the lakefront that morning, Lach said. The crew was headed to salt the path between Grand and North avenues.

He warned lakefront patrons of the dangers of black ice along the lakefront — especially due to recent high water levels and freezing temperatures.

“It might not look like it’s dangerous, but it could still be a sheet of glass, where anyone could slide … just like this vehicle did,” Lach said.

Light snow blanketed the Chicago area Wednesday morning and temperatures measured about 17 degrees, with a windchill of 5 degrees, according to the National Weather Service.

The lakefront bike path was closed from North Avenue to Oak Street as crews worked to remove the vehicle from the water.