Sen. Bernie Sanders, I-Vt., has won the New Hampshire primary, Fox News projects. Sanders had been leading top rival Pete Buttigieg as results came in throughout the evening, but only by a fraction of his 22-point margin of victory over Hillary Clinton in the 2016 New Hampshire primary.

Breaking, 11:04 p.m. ET: Sen. Bernie Sanders, I-Vt., has won the New Hampshire primary, Fox News projects. Sanders had been leading top rival Pete Buttigieg as results came in throughout the evening, but only by a fraction of his 22-point margin of victory over Hillary Clinton in the 2016 New Hampshire primary.

"The reason that we won tonight in New Hampshire, we won last week in Iowa -- is because of the hard work of so many volunteers," Sanders continued. "And let me say tonight that this victory here is the beginning of the end for Donald Trump."

For Sanders, the contest was an opportunity to solidify his status as the party's frontrunner, days after he handily won the popular vote in the maligned Iowa Caucuses, even as Buttigieg took home two more delegates.

A late-surging Minnesota Sen. Amy Klobuchar was in third place in New Hampshire as votes continued coming in. Neither former Vice President Joe Biden nor Massachusetts Sen. Elizabeth Warren appears poised to finish in the top three positions, according to the Fox News Voter Analysis.

The early signs were especially disappointing for Warren, a known quantity in the New England political world who had long polled ahead of Klobuchar nationally.

With 61 percent of precincts reporting, Sanders had 26 percent of the vote; Buttigieg 23.9 percent; Klobuchar 20.1 percent; Warren 9.4 percent; and Biden 8.4 percent. Sanders, a self-described democratic socialist, defeated Hillary Clinton by more than 20 percentage points four years ago in the state.

In an apparent acknowledgment that he was in for a rough night, Biden already left the state hours before polls began closing at 7 p.m. ET. The rest of the polling sites closed an hour later. As the night wound on, Biden addressed his supporters in New Hampshire via livestream from South Carolina.

Speaking minutes later to a more lively crowd in Columbia, South Carolina, Biden told attendees, "We've just heard from the first two of the 50 states. ... Where I come from, that's the opening bell. Not the closing bell. And the fight to end Donald Trump's presidency is just beginning."

Warren, as results came in, acknowledged that Buttigieg and Sanders were doing well, and praised Klobuchar's strong performance. But, she also condemned the increasingly harsh tone in the race.

"Harsh tactics might work if you’re willing to burn down the party," Warren admonished.

New Hampshire will send a total of 24 pledged delegates to the Democratic National Convention, accounting for just one percent of the total delegates available nationwide. (1,991 delegates are needed to clinch the nomination.)

But, the state's prominence as the first primary in the nation affords it extra weight in the campaign, given the momentum and fundraising boost ordinarily enjoyed by top performers.

Nine of the delegates are less important "automatic delegates" who can't participate in the convention in the first round of voting unless one candidate has an overwhelmingly lead. Sixteen of the delegates are awarded proportionally by congressional district, while eight are determined by statewide vote. Candidates must receive 15 percent of the vote to receive any delegates, which is the rule for all Democratic primaries and campaigns.

The night saw two departures from the race, even before all the votes were counted: Colorado Sen. Michael Bennet and Andrew Yang.

“There’s part of me that feels disappointed, like I didn’t fulfill some people’s goals for this campaign,” Yang told BuzzFeed News earlier in the day. “There’s also a competitive part of me too — like I can’t believe I lost to these people.”

By night's end, New Hampshire could begin culling the Democrats' unwieldy 2020 class, which still features nearly a dozen candidates battling for the chance to take on President Trump in the fall. Tuesday's contest comes just eight days after Vermont Sen. Sanders and Buttigieg both notched strong performances in Iowa, despite the numerous irregularities in vote counting there. Both claimed victory.

For Sanders, the New Hampshire primary was an opportunity to build on his dominance of the party's left flank. A repeat of his strong showing in Iowa could severely damage progressive rival Warren, who faced the prospect of an embarrassing defeat in a state that borders her home of Massachusetts. 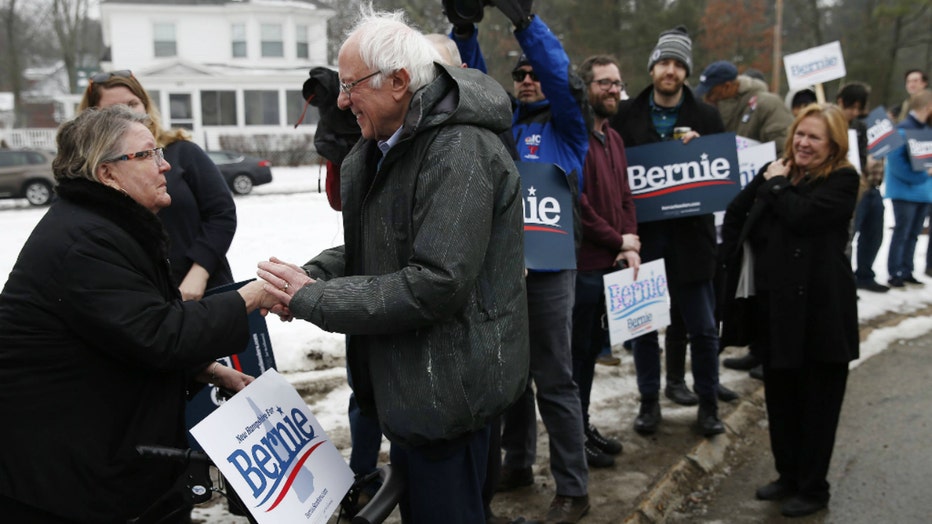 MANCHESTER, NH - FEBRUARY 11: Senator Bernie Sanders greets his supporters outside of a polling location in Manchester, NH on Feb. 11, 2020. With hours left until the polls close, democratic candidates wait to hear the results of the state's first-in

While Sanders marches forward, moderates are struggling to unite behind a candidate. After essentially tying with Sanders for first place in Iowa, Buttigieg, the 38-year-old former mayor began his day as the centrist front-runner. But Klobuchar was mounting a spirited bid for the same voters.

Having already predicted he would “take a hit” in New Hampshire after a distant fourth-place finish in Iowa, Biden was essentially ceding the state. He was traveling to South Carolina Tuesday as he bet his candidacy on a strong showing there later this month boosted by support from black voters.

“We’re going to head to South Carolina tonight,” Biden told reporters as he visited a polling station with voting underway in the state that holds the first primary in the race for the White House. “And I’m going to Nevada… we’ve got to look at them all.”

More than a year after Democrats began announcing their presidential candidacies, the party is struggling to coalesce behind a message or a messenger in its desperate quest to defeat Trump.

That raised the stakes of the New Hampshire primary as voters weighed whether candidates were too liberal, too moderate or too inexperienced — vulnerabilities that could play to Trump's advantage in the fall.

Some candidates sought to undercut the importance of the New Hampshire election, but history suggested otherwise. No Democrat has ever become the party's presidential nominee without finishing first or second in New Hampshire.

Trump, campaigning in New Hampshire Monday night, sought to inject chaos in the process, even as he mocked top Democrats and touted his successes in office.

He even suggested that conservative-leaning voters could affect the state's Democratic primary results, though only registered Democrats and voters not registered with either party can participate in New Hampshire's Democratic presidential primary.

“I hear a lot of Republicans tomorrow will vote for the weakest candidate possible of the Democrats,” Trump said Monday. “My only problem is I’m trying to figure out who is their weakest candidate. I think they’re all weak.”

Trump also attacked Michael Bloomberg, who was showing signs of strength in polling around the country but wasn't on the New Hampshire ballot. The president highlighted Bloomberg's comments during a 2015 appearance at the Aspen Institute in which he said the way to bring down murder rates was to "put a lot of cops" in minority neighborhoods because that's where "all the crime is."

Biden — and the Democratic Party's establishment wing — may have the most to lose in New Hampshire should the former two-term vice president underperform in a second consecutive primary election. Biden has earned the overwhelming share of endorsements from elected officials across the nation as party leaders seek a relatively “safe” nominee to run against Trump.

But the tide may be turning.

New Hampshire House Speaker Steve Shurtleff, who endorsed Biden less than a month ago, spoke about him over the weekend as if he were already eliminated from contention.

“I hope the vice president does well, and I hope he can move forward, but it’s hard to say,” Shurtleff said. “The sad thing for me personally is that he's such a terrific individual.”

Biden's campaign, meanwhile, sought to cast New Hampshire as one small step in the path to the presidential nomination, with contests coming up in more diverse states that award more delegates including Nevada and South Carolina, where Biden hopes to retain his advantage among minority voters.

“Regardless of what happens on Tuesday, we plan to move forward,” Biden senior adviser Symone Sanders said.

The stakes were high for Warren as well in a contest set just next door to her Massachusetts home. She has positioned herself as a mainstream alternative to Bernie Sanders but is suddenly looking up at him and Buttigieg as Klobuchar fights to peel away female support.

Warren released an afternoon memo seeking to downplay New Hampshire's results. Campaign manager Roger Lau outlined a “path to victory” through 30-plus states where the campaign has paid staff on the ground as he highlighted alleged weaknesses in Warren's Democratic rivals.

Buttigieg, young and with no governing experience beyond the mayor's office, is trying to emerge as the leading Biden alternative for his party's moderate wing. In the days leading up to Tuesday’s primary, Buttigieg has come under increasing attack from Biden and Klobuchar, who emphasized his lack of experience.

Sanders has been one of the only candidates to explicitly predict victory in New Hampshire, where he defeated Hillary Clinton by more than 20 percentage points four years ago.

Sanders spent the eve of the primary courting his most passionate supporters, young voters, at two college campuses. At a Monday night rally at an arena on the University of New Hampshire campus, a band pumped up the crowd with a cover of The Who’s “My Generation,” before Sanders and Rep. Alexandria Ocasio-Cortez, a leading figure among young progressives, took the stage.

Fox News' Paul Steinhauser and The Associated Press contributed to this report.