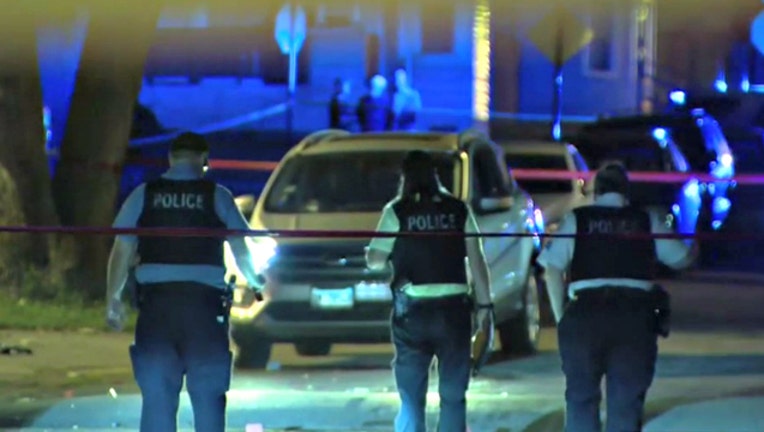 CHICAGO (Sun-Times Media Wire) - One toddler has passed away and at least ten people have been wounded in shootings throughout Chicago since Friday evening at 5 p.m., including two shootings that rang out during parties and two that were aimed at crowds.

The latest reported gun violence happened at 11:36 p.m. in the South Austin neighborhood on the West Side. A 38-year-old man was walking through a vacant parking lot in the 3100 block of South Michigan when someone in a white sedan shot his right hand, according to Chicago police.

The man was taken to Northwestern Memorial Hospital in stable condition, police said.

About half an hour earlier, a man was wounded by gunfire in the South Austin neighborhood on the West Side.

The 36-year-old was in a verbal altercation with another male at 11 p.m. in the 900 block of North Leamington when the other person shot him, according to Chicago police.

He was taken to Mount Sinai Hospital, where he was in good condition, police said.

A 2-year-old boy was killed late evening in the Hermosa neighborhood on the Northwest Side.

An unknown person unleashed gunfire on the toddler and a young man at 10:17 p.m., killing the child and marking the community area’s first homicide of 2018, according to Chicago police.

The 18-year-old man and 2-year-old were standing at the mouth of an alley in the 2200 block of North Kilbourn when a hail of bullets emerged from the street’s end, police said.

Two females had been fighting inside the alley between Kilbourn and Kenneth Avenues when the shots rang out toward their direction.

The bullets struck a 2-year-old boy in the neck, police said. He was taken to Stroger Hospital in critical condition and pronounced dead shortly after.

The 18-year-old was shot in his left leg and taken to Illinois Masonic Medical Center, where his condition was stabilized, police said.

The Cook County medical examiner’s office did not immediately confirm the boy’s death.

Another homicide unfolded in the Far South Side Riverdale neighborhood after a party turned fatal and a man died and a woman and man were wounded from a shooting.

The trio was at an outdoor gathering at 8 p.m. in the 13200 block of South Prairie Avenue when shots rang out, police said. Witnesses told police that a female and male pulled out weapons during an altercation and opened fire on the group.

The men, ages 18 and 48, were struck in the body and taken to Christ Medical Center in Oak Lawn, according to police.

The 20-year-old woman suffered a gunshot wound her arm and was taken to the University of Chicago Medical center, where her condition stabilized, police said.

The older man’s condition stabilized, and the younger man was in serious condition until he was pronounced about midnight Sunday, police said.

The Cook County medical examiner’s office did not immediately confirm the death.

Before dawn Saturday, a man was grazed by a bullet in the West Englewood neighborhoodon the South Side.

About 4:10 a.m., the 37-year-old was walking in the 7200 block of South Paulina Avenue when a blue minivan drove up and someone inside fired shots, according to police.

He was grazed in his abdomen and refused medical treatment at the scene, police said.

Another party in the Far South Side, this time in the Roseland neighborhood, was disrupted by gunfire early Saturday.

The man suffered a gunshot wound to his left foot, but refused help from medical professionals, according to police.

The first shooting of the day was directed at a crowd but only struck one person in the East Garfield Park neighborhood on the West Side.

A 30-year-old man was standing with the group about 1:15 a.m. when shots rang out in the 3800 block of West Gladys Avenue, according to Chicago police.

He was struck in the buttocks and leg, and was taken to Stroger Hospital in good condition, police said.

Early Friday evening, one man was shot and another arrested in the Jackson Park Highlands neighborhood on the South Side.

At 6:45 p.m., a 46-year-old was shot while walking down a sidewalk in the 6700 block of South Jeffery Boulevard, according to police.

The shooter, who fired from across the street, was taken into custody, police said. A weapon was recovered from him.

The 46-year-old man was taken to a hospital, where his condition was stabilized, police said.

The weekend’s first shooting occurred when a man was shot late Friday in the Rosemoor neighborhood on the Far South Side.

He was taken to University of Chicago Medical Center in serious condition, police said.

Last weekend, six people were killed and 15 others wounded in shootings between Friday evening and Monday morning.