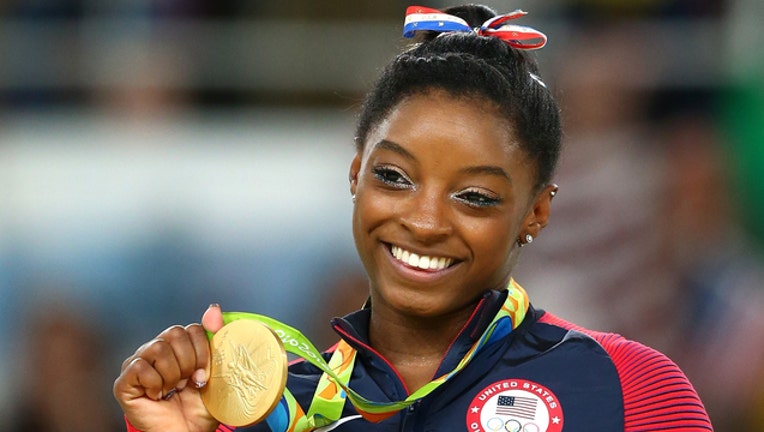 Gold medalist Simone Biles of the United States celebrates on the podium at the medal ceremony for the Women's Floor on Day 11 of the Rio 2016 Olympic Games at the Rio Olympic Arena on August 16, 2016. (Photo by Alex Livesey/Getty Images)

Biles, 20, who was a key member of the 2016 gold medal winning Olympics team said online "I too am one of the many survivors that was sexually abused by Larry Nassar."

Biles released her statement on Twitter with #MeToo saying there were many reasons she had been relunctant to share her story but "I now know that it is not my fault."

"Please believe me when I was say it was a lot harder to first speak those words out loud than it is now to put them on paper."

"There are many reasons that I have been reluctant to share my story, but I know now it's not my fault."

"This behavior is completely unacceptable, disgusting, and abusive, especially coming from someone whom I was TOLD to trust."

Biles is the latest athlete to come forward with allegations against Nassar  along with former teammates McKayla Maroney, Aly Raisman and Gabby Douglas among the more than 100 victims.

Nassar is the former Michigan State University and USA gymnastics doctor. Many of these assault took place while Nasser was performing "treatment" on these young women athletes on campus.

"I'm so horribly sorry, that this was like a match that turned into a forest fire out of control," he said. "I Pray the rosary every day for forgiveness. I want them to heal."