‘I only have them going to the Elite 8’: Sister Jean explains why she doesn’t have her Ramblers going to the final round

Sister Jean says by putting her Ramblers in the Elite 8, she's hoping they'll push and prove her wrong.

CHICAGO - The Ramblers are gearing up for their Sweet 16 matchup Saturday when Loyola takes on Oregon State.

And of course, they'll have Sister Jean cheering them on.

"I start out by saying to them, ‘Well, I know you can win. Porter knows, our fans know so just get out and do it," said Sister Jean.

The 101-year-old got the vaccine to be with her team.

"I will say good and gracious God, we are going to play these Beavers tonight. We don’t know much about them - but we're going to do our very best. So watch each one of the team members and especially, and I sorted out a few that we need to watch especially," Sister Jean says in her prayers before the Ramblers play.

Sister Jean makes sure to send emails to her players to encourage them before every game, and to tell them what they should work on.

She knows her players, and the threats on the opposing team.

She is all in, and so serious that many say you can't talk to her while she's watching.

"I used to say that we used to pray for the referees, and I think they're doing fine. I think they’ve been very well chosen this year," said Sister Jean. 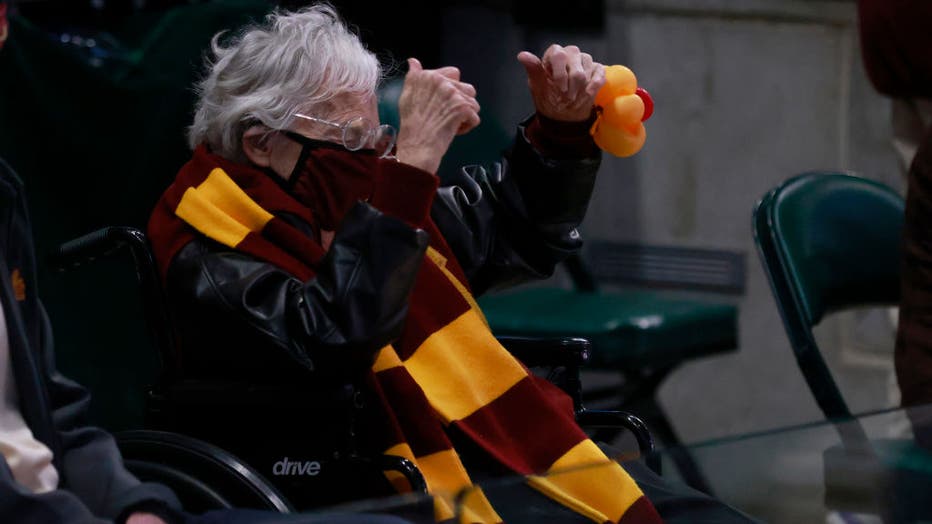 INDIANAPOLIS, INDIANA - MARCH 21: Sister Jean celebrates the Loyola-Chicago Ramblers win over the Illinois Fighting Illini in the NCAA Basketball Tournament second round at Bankers Life Fieldhouse on March 21, 2021 in Indianapolis, Indiana. (Photo by

She initially predicted they would make it to the Elite 8. But now?

"I’d like to see them go right to the top," said Sister Jean. "This time I thought I’ll have them go the Elite 8, and then maybe they'll push a little harder, and maybe we'll get up to the very top to play that game."