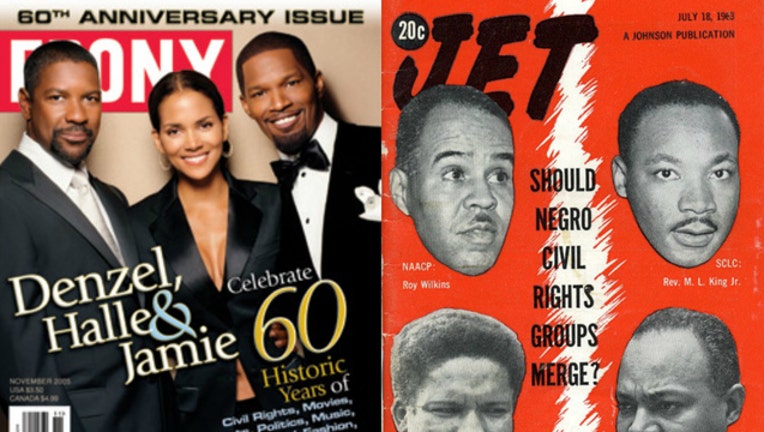 WASHINGTON (AP) - The photo archive of Ebony and Jet magazines chronicling African American history is set to head to the Smithsonian National Museum of African American History and Culture and other cultural institutions.

The Ford Foundation, the John D. and Catherine T. McArthur Foundation and the Andrew W. Mellon Foundation are buying the archive for $30 million as part of an auction to pay off secured creditors of Johnson Publishing Company.

"We felt it was imperative to preserve these images, to give them the exposure they deserve and make them readily available to the public," said the Ford Foundation's president, Darren Walker. A judge in Chicago tentatively approved the deal Thursday.

The foundations plan to donate the more than 4 million prints and negatives -- considered one of the most significant collections of photographs cataloguing African American life -- to the Smithsonian National Museum of African American History and Culture, the Getty Research Institute and other institutions.

"There is no greater repository of the history of the modern African-American experience than this archive," said James Cuno, president of The J. Paul Getty Trust. "Saving it and making it available to the public is a great honor and a grave responsibility."

Johnson Publishing filed for Chapter 7 bankruptcy protection in April. The former magazine publisher sold its Ebony and Jet magazines three years ago. The Chicago-based company has tried since 2015 to sell its photo archive. It was once appraised at $46 million.

The collection of 4 million images chronicles the civil rights movement and the lives of prominent figures such as Billie Holiday, Muhammad Ali and Coretta Scott King at her husband's funeral. It was Jet in 1955 that published a photograph of the open coffin of Emmett Till. The photo showed the effects of the fatal beating the 14-year-old Chicago boy suffered at the hands of white men in Mississippi for allegedly whistling at a white woman.

The acquisition will preserve the archive "for the benefit of scholars, the public and future generations forever," said the MacArthur Foundation's president, Julia Stasch.

The foundations plan to transfer the archive to the Smithsonian National Museum of African American History and Culture and the Getty Research Institute pending final disposition.

"Together, our organizations will ensure these images, stories and the history of these publications are well-preserved and available to the public and future generations."