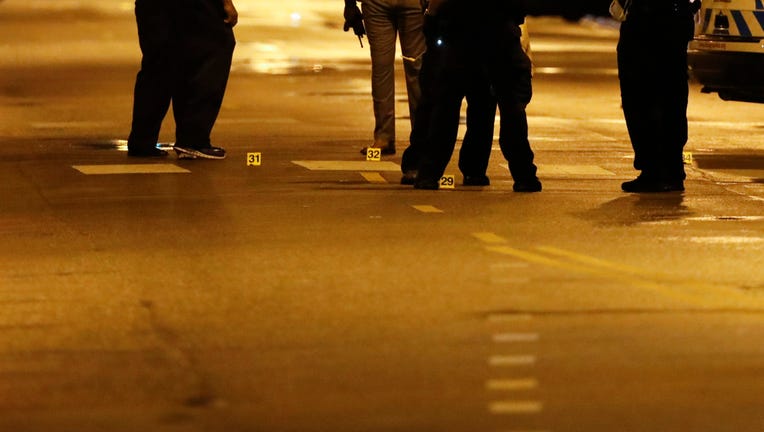 Evidence markers are seen on the ground as Chicago Police officers investigate the scene of a shooting in Chicago, Illinois, on July 21, 2020. (KAMIL KRZACZYNSKI/AFP via Getty Images / Getty Images)

CHICAGO - Illinois State Police is calling for increased access to license plate readers and cameras on the greater Chicago area expressways amid a spate of shootings along the roadways, according to multiple reports.

More than half of this year's shootings-- 41 -- were reported on just two roadways: Interstate 57 and the Dan Ryan Expressway, the outlet reported.

The data shows that 29 of those Chicago-area expressway shootings occurred during the states’ Stay at Home Order, which was announced on April 23 and continued through the end of May. During that time, Illinois State Police spokesperson Beth Hundsdorfer explained, traffic was “sparse,” making it easier for suspects to get away.

“This sparse or reduced traffic also limited the number of potential witnesses to assist with creating leads to solving these violent offenses,” Hundsdorfer said, according to the Tribune.

A law passed in July of 2019, which took effect this year, requires state agencies including Illinois State Police and the Department of Transportation to come up with a plan to increase the number of cameras along expressways in Cook County. The cameras can be used only for firearm-related offenses or to detect roadway hazards.

But according to WGN-TV, few devices have been installed so far.

In a statement to the outlet, a spokesperson for the Illinois Department of Transportation said high-definition cameras and license plate scanners require “a significant upgrade in technology to the IDOT’s existing camera system.”

At least 14 people were injured in a shooting Tuesday outside of a funeral home in Gresham on the South Side.

“The department will continue to work with ISP and all other stakeholders to see that the conditions of the act are being met,” the spokesperson added.

Shootings have skyrocketed elsewhere in Chicago over the past several weeks.

On Tuesday night, 15 people were shot outside a funeral home on Chicago’s South Side, despite a police presence.

First Deputy Superintendent Eric Carter said mourners outside a funeral home in the Gresham neighborhood were fired upon from a passing vehicle. Carter said several targets of the shooting returned fire. The vehicle later crashed and the occupants fled in several directions. Carter said all the victims were adults.

At least 60 shell casings were found at the scene of the shooting, Carter said. It wasn’t immediately known if anyone other than attendees of the funeral were victims, nor if anyone in the SUV had been wounded.

A person of interest was being questioned Tuesday night but no arrests had been made, police said.

The shooting comes as the Department of Homeland Security is planning to deploy dozens of federal agents to Chicago to deal with the uptick in violent crime.