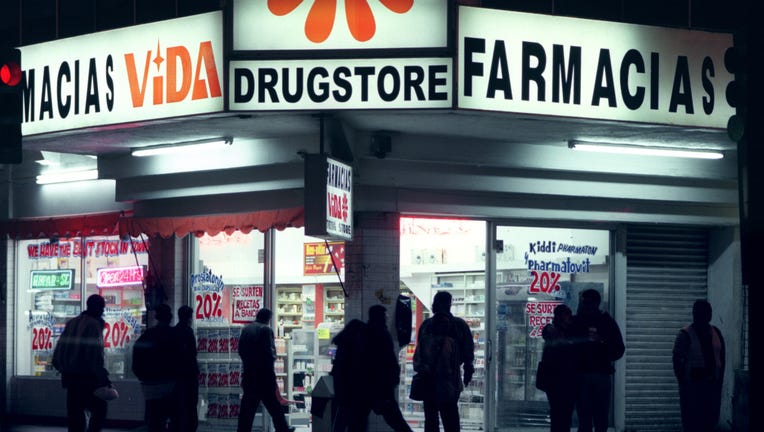 The proliferation of pharmacies in Tijuana leads many of them to stay open all night to court clientele, many of whom come from the United States in search of low prices. (Alex Garcia/Los Angeles Times via Getty Images / Getty Images)

Ann Lovell had never owned a passport before last year.

Now, the 62-year-old teacher is a frequent flier, traveling every few months to Tijuana, Mexico, to buy medication for rheumatoid arthritis — with tickets paid for by the state of Utah’s public insurer.

Lovell is one of about 10 state workers participating in a year-old program to lower prescription drug costs by having public employees buy their medication in Mexico at a steep discount compared to U.S. prices. The program appears to be the first of its kind, and is a dramatic example of steps states are taking to alleviate the high cost of prescription drugs.

In one long, exhausting day, Lovell flies from Salt Lake City to San Diego. There, an escort picks her up and takes her across the border to a Tijuana hospital, where she gets a refill on her prescription. After that, she’s shuttled back to the airport and heads home.

Lovell had been paying $450 in co-pays every few months for her medication, though she said it would have increased to some $2,400 if she had not started traveling to Mexico. Without the program, she would not be able to afford the medicine she needs.

“This is the drug that keeps me functioning, working,” said Lovell, who works at an early-intervention program for deaf students that's part of the Utah Schools for the Deaf and Blind. “I think if I wasn’t on this drug ... I’d be on disability rather than living my normal life.”

The cost difference is so large that the state's insurance program for public employees can pay for each patient’s flight, give them a $500-per-trip bonus and still save tens of thousands of dollars.

Other states have taken new approaches to address the high costs of prescription drugs. California is looking at launching its own generic-drug label. Louisiana has a Netflix-style program for hepatitis C drugs, where the state negotiated a deal to pay a flat fee rather than for each prescription.

Several states are looking at creating boards aimed at keeping prices affordable, and four have started what’s expected to be a lengthy process to begin importing drugs from Canada under a new Trump administration plan.

The Utah program was created under a 2018 state law dubbed “right to shop,” by Republican Rep. Norm Thurston. The Public Employees Health Program offers it only for people who use a drug on a list of about a dozen medications where the state can get significant savings. Of the 160,000 state and local public employees covered by the insurer, fewer than 400 are eligible, according to Managing Director Chet Loftis.

Officials have tracked the medications from the manufacturer to the pharmacy to the patient, to make sure people are getting the same drugs they would at home, he said. They contract with a specialty pharmacy that works with one of the region's largest private hospital systems. A representative from a company, Provide Rx, escorts patients from the San Diego airport to Hospital Angeles in Tijuana and back across the border.

Lovell has a prescription from her doctor in Utah, and each time she travels to Mexico she sees a doctor at the hospital as well. She updates the doctor on her condition, gets her prescription, and takes it to the pharmacist, who gives her the medication.

Provide Rx also works with a dozen or so private companies, some of whom offer similar bonus programs to their staffers, said general manager Javier Ojeda.

Just over a year after the program began, the state has saved about $225,000, Loftis said.

Though the number of people participating is relatively small, the savings add up quickly. The annual U.S. list price for the drug Lovell takes, Enbrel, is over $62,000 per patient. With the Mexico program, after the cost of the flight and the bonus, the state still cuts its expenses in half.

“It makes sense for us to do this,” Loftis said.

Thurston had hoped more people would sign up, saving the state $1 million by now.

But officials are optimistic more people will sign on now that they see the program is working. They have expanded to offering flights to Canada, where there’s a clinic in the Vancouver airport and the travel costs are about the same.

While importation of prescription drugs is illegal because drugs sold in other countries haven’t been approved by the Food and Drug Administration, the U.S. allows people to bring in a three-month supply for personal use.

There have been long been more informal trips across the border elsewhere; Democratic presidential candidate Bernie Sanders has taken bus trips with patients from border states into Canada to highlight the cost of prescription drugs. But the Utah program appears to be the only formal state program of its kind, said David Mitchell, a cancer patient and the founder of the advocacy group Patients For Affordable Drugs.

“It is unfortunate and, in fact, wrong that the citizens of this great country have to travel to other countries to get drugs they need at affordable prices,” he said.

Others say the “pharmaceutical tourism” approach has risks and doesn’t solve the issue of high prescription drug prices in the United States. Peter Maybarduk with the nonprofit advocacy group Public Citizen said people can come across unsafe medications in other countries, and it’s important not to undercut the importance of U.S. regulators.

“It is a Band-Aid for people who really need it,” he said. “We need reform of the system as whole.”

In most other countries, national health programs negotiate lower drug prices at large scale, and sometimes refuse to cover the most expensive ones. Meanwhile, patents generally run much longer in the U.S. than other countries, allowing for monopolies. Drug makers also often point to the high cost of creating a drug to bring to market.

Utah truck driver Jason Pierce has been grateful to find the drug Stelara, the only effective treatment for his psoriasis. It’s also expensive, so he and his wife, a Utah health department employee, started traveling to Mexico to get his shots.

Their insurance through her state job covers it completely, so the trips don’t save them any money. But with both flights covered through the state program and the $500 bonuses, they can make a short vacation.

“It’s pretty easy,” he said. The drug is “exactly the same.”

And the travel means the drug saves their public insurer thousands, helping save taxpayer money and bring down premiums, his wife, Robbin Williams, said.

“I just think it's the moral and right thing to do,” she said.