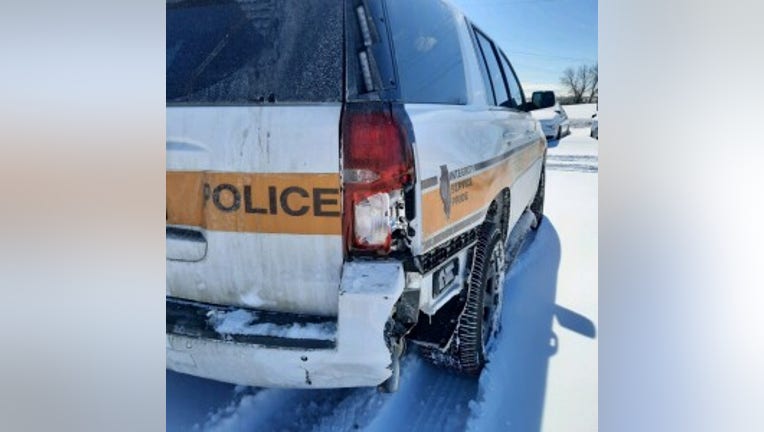 A state police squad car was damaged in a crash Tuesday on Interstate 80. | Illinois State Police

JOLIET, Ill. - A driver rear-ended an Illinois State Trooper Tuesday in Joliet, the second crash in a day involving troopers who were investigating crashes.

So far this year, 10 state police squad cars have been struck by passing cars, according to ISP Director Brendan Kelly.

"This is about more than just obeying the law — it’s about basic decency and respect for the very lives of the brave souls on our streets simply trying to help the public," Kelly said in a statement.

The latest crash involved a trooper sitting in a parked squad car Tuesday morning on Interstate 80 and the interchange with Interstate 55. Another driver lost control of their vehicle about 8:15 a.m. and spun into the trooper’s car, state police said. The trooper was briefly hospitalized with minor injuries.

The other driver was cited for violating Scott’s Law and driving too fast for conditions, state police said. Scott’s Law, also known as the "Move Over" law, penalizes drivers with a fine up to $10,000 for not moving over and slowing down for stopped emergency vehicles.

Less than a day earlier, another trooper was seriously injured in a crash on I-55 near Route 30. A driver rear-ended the trooper as he investigated another crash, state police said.

A snowstorm moved into the Chicago area Monday and dropped more than a foot of snow in some areas.