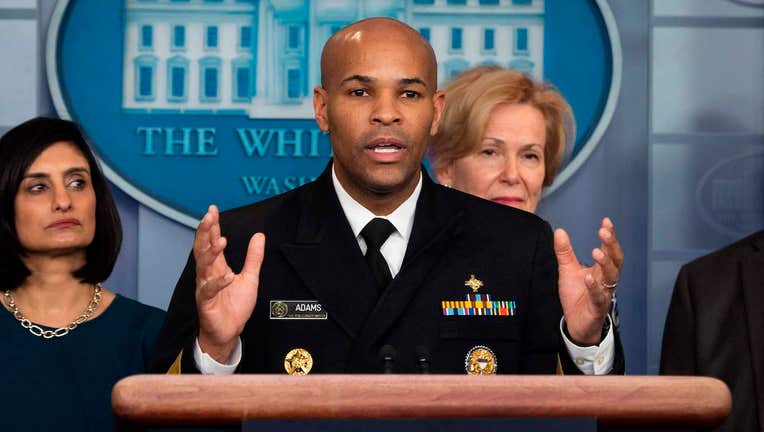 US Surgeon General Jerome Adams speaks during a press briefing about the Coronavirus (COVID-19) in the Brady Press Briefing Room at the White House in Washington, DC, March 14, 2020. ( JIM WATSON/AFP via Getty Images )

Surgeon General Jerome Adams said on “CBS This Morning” that he is hopeful New York, which has reported a nation-high 519 deaths and more than 44,000 confirmed cases, will see cases begin to come down next week. But he warned that Detroit, Chicago and New Orleans “will have a worse week next week.”

Dr. Deborah Birx, the White House coordinator for the coronavirus response, also mentioned Cook County as an area of concern on Thursday.

But infections statewide have jumped 135% just since Monday, and the escalating number prompted Chicago Mayor Lori Lightfoot to predict that Gov. J.B. Pritzker’s stay-at-home order, scheduled to expire in 10 days, will last “deep into April.”

At his daily briefing in Chicago, Pritzker would not comment on an extension but he was disturbed by the infection’s upward trend.

“Nothing is set in stone,” Pritzker said. “There’s been a progression here.”

Lightfoot warned on Thursday that 40,000 people could need treatment at hospitals in the coming weeks as she ordered the city’s lakefront trails and adjacent parks shut down.

Pritzker’s stay-at-home dictum allows essential industry employees to work. People can run essential errands and exercise outside. But get your fresh air in groups of fewer than 10 and by staying six feet apart, the governor said.

“You are in danger and you are putting other people in danger if you don’t adhere to these rules,” Pritzker said.

At the Pentagon, the Army Corps of Engineers’ commander, Lt. Gen. Todd Semonite, told reporters the corps is setting up beds at Chicago’s McCormick Place Convention Center to accommodate about 3,000 patients. The makeshift hospital, which will include 750 beds in what Semonite called self-contained units, will be ready by April 24.

Chicago officials are also working to reopen a shuttered hospital for patient space and hotels will provide rooms for patients with mild cases who still need to be quarantined.

The University of Illinois Hospital and Clinics in Chicago confirmed Friday that 12 registered nurses have tested positive for COVID-19. The Illinois Nurses Association made the announcement and said their members were forced to work without protective equipment such as masks and gloves.

Hospital CEO Michael Zenn responded in a statement that “a limited number of these cases are believed to be due to exposure in the health care setting.” He said no one treating patients suspected of having COVID-19 have gone without protective equipment. He added that starting Friday, all staff members would wear masks daily.