Police arrested a 15-year-old after an attack on an Asian couple in Tacoma, Washington was caught on camera, posted to social media, and reported to police.

TACOMA, Wash. - Police arrested a 15-year-old after an attack on an Asian couple in Tacoma, Washington was caught on camera, posted to social media, and reported to police.

The boy was taken into custody on Friday and charged with 2nd-degree assault, according to a Tacoma Police media release.

A Pierce County prosecutor told Q13 News that the juvenile would have been 14 years old at the time of the incident. Q13 News will not name the suspect because he is a child.

"Without this video, this arrest would not have happened," said Officer Wendy Haddow.

Tacoma Police said a family member of the victims seen in the video reported the incident to police shortly after midnight on March 31.

"Fortunately for us, the victim’s family saw the video and said, 'Hey this is us," said Haddow.

The video taken of the attack shows a person wearing a red hoodie running up to two people who are walking along the sidewalk. The person in red then starts punching an Asian man. Later in the video, you can see the man appears to be bleeding from his nose. Off-camera, someone is taunting and cursing at the victim.

Police said Friday that the 56-year-old male victim didn’t know a video was taken at the time of the attack. 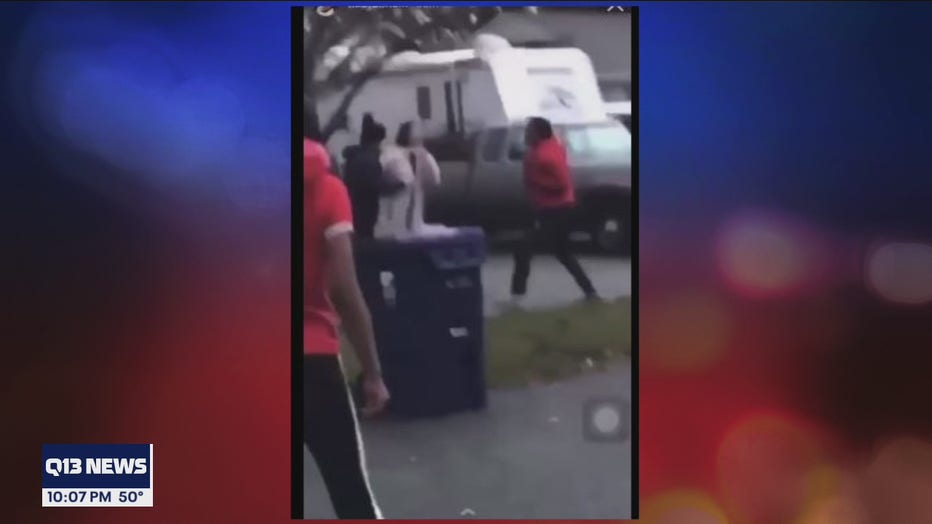 "When I watch that video it causes a lot of concern," said Officer Wendy Haddow with the Tacoma Police Department.

However, while police sid the video is what helped solve the case, some members of the community are asking if more could have been done during the original investigation.

"There should have been follow-ups. They should have known that their report was actually taken seriously at that time and the police find out the information they need to protect this couple," said Kelly Blasko.

Blasko is a board member with Legally Black, an activist organization working toward police reform and accountability. She said the honesty for solving crimes should not be placed on the victims.

Previously, Haddow said the department was investigating the situation as a hate crime. Haddow said The City of Tacoma has not seen any hate crimes directed toward Asian Americans or Pacific Islanders since before 2019.

Now, the determination of if this incident classifies as a hate crime will fall on the prosecutor's office.

"This is very shameful and it’s offensive and it really touches us," said Lua Pritchard.

Pritchard is the executive director of the Asia Pacific Cultural Center in Tacoma.

She said it’s been difficult to see the recent headlines of targeted hatred and violence against the Asian American and Pacific Islander community. and that it’s even harder when these incidents are happening in her backyard.

Tacoma Police is asking anyone with additional information about the incident to contact them.