US eliminated from World Cup

The Netherlands beat the Americans 3-1 to advance to the quarterfinals.

Tyler Adams put his hands on his knees and hung his head. Teammates came over, one by one, to pat their fearless captain on the back or give him a hug. After a couple of seconds, Adams kneeled on the turf at Khalifa International Stadium, head still down, as thoughts rushed through his mind.

The final whistle had just blown on the United States men's national team's 2022 World Cup. The journey was over after a 3-1 loss to the Netherlands.

"For me, frustration to begin with," Adams said, explaining what he was thinking during those moments. "It's the first time in a long time people will say, ‘Wow, this team has something special.' There were so many ups and downs the past three years and when you put four performances like that out on the field, it really gives people something to be excited about with the potential for this group.

"Potential is just potential. But if we maximize it in the right way, we can do something." 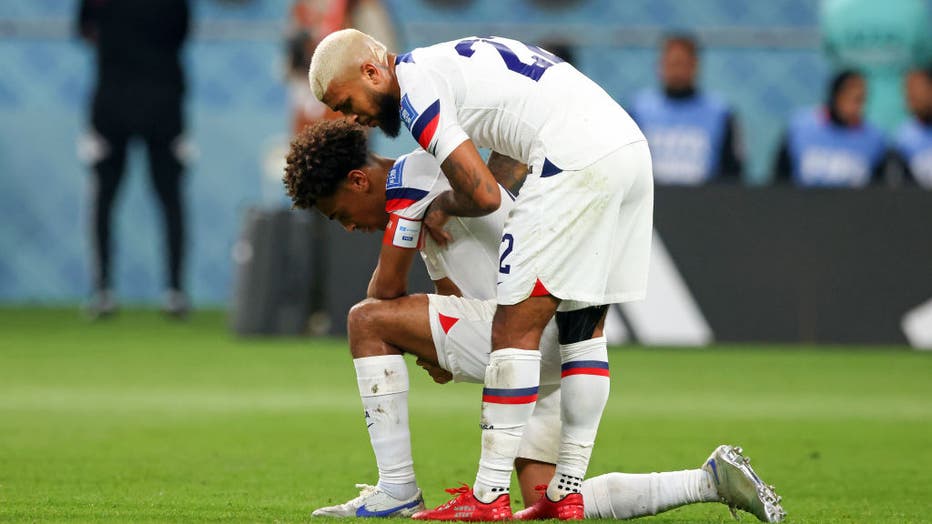 Tyler Adams of USA and DeAndre Yedlin of USA look dejected after their team's elimination from the tournament during the FIFA World Cup Qatar 2022 Round of 16 match between Netherlands and USA at Khalifa International Stadium on December 03, 2022 in

The U.S. wanted to win the World Cup. The team wasn't satisfied just making it out of Group B and earning a spot in the Round of 16. Other U.S. squads have done that, including the most recent squads that played in the 2010 and 2014 tournaments.

The players wanted to take on Lionel Messi and Argentina in the quarterfinal next week. They wanted to face Brazil in the semifinal and France in the final. That's what this young and ambitious group wanted to do in Qatar.

The Americans came up short of their goals and were glum and disheartened in the aftermath. A dejected Christian Pulisic embraced his parents. Gio Reyna declined to speak with reporters, walking through the mixed zone saying, "Sorry, sorry, sorry, sorry." Tim Ream, the oldest player on the roster at 35 years old, had tears in his eyes knowing he'd likely played in his first and last World Cup.

And while battling every emotion, the historically young USMNT still had the foresight and maturity to look forward and have perspective.

"I mean, we had a common goal four years ago, a mission we set out on which was to change the way the world views American soccer," midfielder Weston McKennie said. "I think this tournament restored a lot of belief, restored a lot of respect to U.S. Soccer and soccer in our country.

"We've shown that we can be giants, eventually. We may not be there yet, but I think we are definitely on our way."

The U.S. not only had the second-youngest roster in Qatar, but played the four youngest starting lineups in the tournament. It's a squad of rising talent, most of whom will be around in four years when the United States co-hosts the 2026 World Cup with neighbors Mexico and Canada. In fact, the bulk of that team still won't even be 30 years old. Adams, McKennie and Pulisic will all be 27. Sergino Dest and Brenden Aaronson will be 25. Reyna will be 23.

By then, they'll have four more years of playing at the highest level of the sport in the top European leagues. Maybe some of them will play in a Champions League Final. But perhaps most importantly, they now have World Cup experience to carry with them.

Coming into this tournament, only defender DeAndre Yedlin had ever been to or played in one as part of the 2014 team.

"The biggest thing in this group is learning what it feels like to lose in a World Cup," Yedlin said a couple hours after the Netherlands match. "Now you go into the next one and pretty much everybody in that group, probably, will have played in the World Cup. So now it's a whole different story. Now they know that feeling of what it's like to lose after putting so much into it and the feeling of defeat.

"The past can only fuel success in the future."

There's this notion within the USMNT that things happen for a reason. Had it qualified in 2018, maybe they wouldn't have had the opportunity to build a special brotherhood as many of these players earned their first senior team call-ups in the aftermath of that qualifying disaster.

Over the past four years, the bulk of the squad built a foundation, an identity, a culture and became close friends. During the pandemic, guys stayed in touch from all around the world, talking on headsets while playing video games. At their team hotel in Doha, there were 15-20 players at any given time playing pool or cards or eating together rather than being alone in their room on their phones.

Then again, what if the Americans had qualified and played in Russia four years ago? Adams, McKennie and Pulisic would have had that World Cup experience before 2022. Maybe a few other players as well. Would things have gone differently this year?

Regardless, there's hope for the future. Not just because of the youth and talent that will only get better with time, but because of the solid relationships and chemistry they've developed.

"The belief we have in each other and the bond that we have off the field is different," defender Walker Zimmerman said. "It's different than any team I've been a part of.

"The love that we have for each other and the way that the guys who didn't play a single minute supported the guys who played every minute. That's unique. And it's not easy to do knowing that half the guys are giving up their dream of playing in a World Cup just to support [the other] guys in a World Cup. And to truly have guys that believe in that, believe in the process as a team, that's what makes this group different."

To make this all worth it in four years, though, the group has work to do. For one, it needs a proper, reliable striker. Coach Gregg Berhalter said after the match that the Netherlands' attacking quality was the difference Saturday.

"We don't have a Memphis Depay right now, who's scoring in the Champions League," Berhalter said of the Oranje and Barcelona forward who scored in the 10th minute. "But that's not to make an excuse for this group. It's still a resilient group. A group that works hard and has a great spirit. That stuff is going to come."

The U.S. proved its worth in four tough matches against veteran opponents with players and coaches who have been here before. The Americans went toe to toe with England and were resilient against the Netherlands, two top-10 teams in the world, per FIFA rankings. They impressed world-renowned coaches and players.

On Friday, Netherlands coach Louis van Gaal called the USMNT an "excellent team … I would even say, one of the best teams. One of the teams that's fine-tuned."

After the game Saturday, Netherlands goalkeeper Andries Noppert said: "In my opinion, they're really tough. They go like crazy like hell. They're working together. They don't give up."

It may be hard to comprehend all of this at the moment. But once the USMNT climbs out from under the rubble of disappointment, it can confidently use this experience as a springboard for 2026.

"I think it will help a lot," McKennie said. "Americans are known as people that don't give up and the U.S. is the land of opportunity. And I think this was a big opportunity for a lot of us in this tournament. And I think we did really well with it.

"Obviously we went out and it sucks. But at the same time, a lot of us will use this as a chip on our shoulder over the next four years to try and prove what we can do."

Read more from the World Cup: