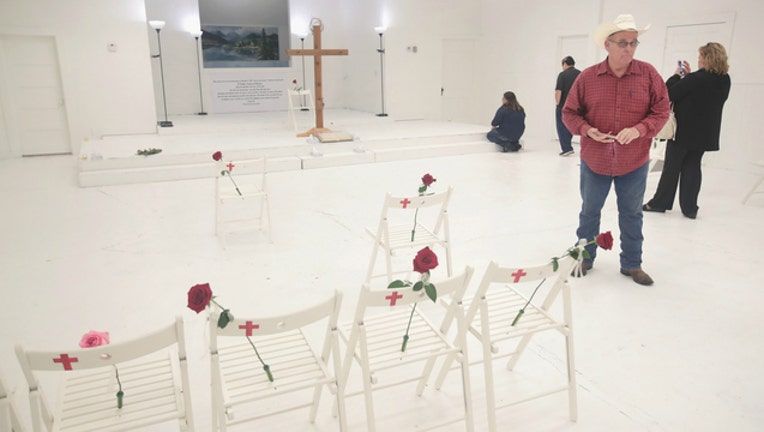 Visitors tour the First Baptist Church of Sutherland Springs, Texas, after it was turned into a memorial to honor those who died on November 12, 2017. The chairs are placed at the location where the victim died. (Photo by Scott Olson/Getty Images)

SUTHERLAND SPRINGS, Texas (AP) - Hundreds of mourners crowded into the tiny town of Sutherland Springs for the first Sunday service since a gunman stormed the First Baptist Church a week earlier, killing more than two dozen people in the worst mass shooting in Texas history.

After an emotional sermon held outdoors under a massive white tent, congregants and the public were invited to return to the church for the first time since the tragedy. A chilling memorial set up inside the church included 26 white chairs - including one for the unborn baby of a victim who was pregnant - bearing each victim's name or nickname painted in gold.

Pastor Frank Pomeroy shared his personal heartache and a message that the community bound together by faith can move past the evil that attacked the church seven days earlier.

"Rather than choose darkness as that young man did that day, we choose life," Pomeroy said during the service, his voice cracking as he spoke about his 14-year-old daughter, Annabelle, who was among those killed in the Nov. 5 rampage.

"I know everyone who gave their life that day," he said, pausing to gather himself. "Some of whom were my best friends and my daughter." He wiped his eyes, then added, "I guarantee they are dancing with Jesus today."

Initially, the church had planned to hold Sunday's service at an adjacent community center, which can accommodate a few dozen people. But when organizers realized hundreds planned to attend, the service was moved to a massive white tent erected in a baseball field.

So many people turned up that the tent's side flaps had to be opened for an overflow crowd so that those who couldn't get a seat could see and hear what was going on inside. Mark Collins, a previous pastor at First Baptist, said it was the largest gathering in the church's 100-year history.

The front three rows were reserved for survivors of the attack and the families of those killed. Many arrived early, as a steady rain fell on the tarp roof, offering hugs to each other and prayers.

Congregants wept during the service and a moving version of "Amazing Grace," led by three singers and a man on guitar, as the voices of hundreds sang along.

Some bowed their heads, others raised their hands and swayed as the music played, and tears streamed down their faces.

"Amazing Grace" was also played at halftime at Floresville High School at Friday night's game, in tribute to the victims.

Later Sunday, the First Baptist Church opened its doors for the first time since the shooting. The inside had been transformed into a memorial with its walls, floor and pulpit painted white.

Broken windows and ceiling tiles had been replaced and bullet holes filled. The church's pews, the carpet and all equipment had been removed. All that filled the space were the 26 white chairs, each with a red rose tied to it except for one that had a pink rose for the unborn baby.

A line of about 85 people snaked from the church entrance and curved around the block, including people who traveled from as far away as the East Coast, said Collins, the church's former pastor who has returned to help in the tragedy's aftermath.

Next Sunday's service is expected to take place on the grounds of the church, likely in a makeshift structure, Collins said. Church members will have to decide whether to demolish the church, as some have said is likely, he said, but plans are also being discussed to build a new structure nearby.

The gunman, Devin Patrick Kelley, went aisle to aisle looking for victims and shot crying babies at point-blank range, according to witness accounts. The dead ranged in age from 18 months to 77 years old. About 20 people were wounded in the shooting.

Kelley died of an apparent self-inflicted gunshot wound after he was shot and chased by two men who heard the gunfire at the church. Investigators have said the attack appeared to stem from a domestic dispute involving Kelley and his mother-in-law, who sometimes attended services at the church but wasn't there the day of the shooting.

Kelley had a history of domestic violence: He was given a bad conduct discharge from the Air Force after pleading guilty to assaulting his first wife and stepson.

The church has reached out to Kelley's family and was praying for them, Collins said.

"Our hearts and prayers go out to his family," he added.

For Sunday's service, people from other churches dropped off handmade prayer cloths and tiny wooden crosses, among other gifts. Mental health organizations provided tissues and brought therapy dogs to the service.

"The pain of losing 26 members is overwhelming," Cornyn said. "Many lives have been changed forever. ... I can't imagine what you've been grappling with ever since."

Sign up for the AP's weekly newsletter showcasing our best reporting from the Midwest and Texas: http://apne.ws/2u1RMfv