NORTHBROOK - It was a rude wakeup call for a 12-year-old girl after video revealed a thief had stolen her popular neighborhood yard signs. But she is only using the incident to push her message onward.

“I wanted to make a big change in my community,” said Ella Marks.

For the last month, the 12-year old has been quite the busy fund raiser.

“At first we thought it was just going to be like 50 people. Our close friends, family, but then everybody wanted one,” she said. “And now I think we're at like over 900 signs sold.”

Marks has been selling signs in Northbrook for $15 a pop. They say, "We Believe Black Lives Matter," "Love is Love" and "Science is Real," among other short messages.

So far, the soon-to-be 8th grader has raised more than $6,000 for a cause she believes in.

“It's National Bail Out, which helps with African American women's bail and bail reform,” Marks said. 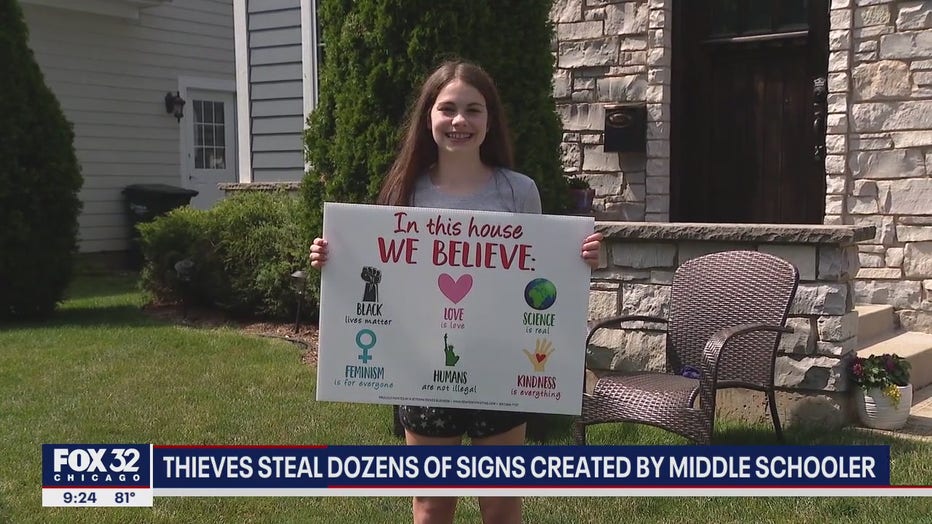 But on Thursday morning, the young girl woke up to some bad news. Dozens of her signs had been stolen overnight off the lawns of neighborhood residents. A Ring security camera caught the thief in action. You can see what appears to be a young man stealing the signs.

“This morning I went to breakfast and my parents showed me the video and we're like, ‘this guy came around the neighborhood and stole over 50 signs!’ I was just in shock and trying to eat my breakfast and comprehend what had happened,” Mark said.

Despite the thefts, Marks says she is undeterred.

“I mean, I'm not going to let it get in the way of spreading the good message or anything, and I'm going to keep selling them,” she said. “And I just think it was just kind of like, dumb of him to do that.”

If you are interested in a sign, visit Ella's Yard Signs on Facebook. They are all printed by a Veteran-Owned Business, and all the proceeds go toward National Bail Out.

Northbrook Police are investigating the thefts.