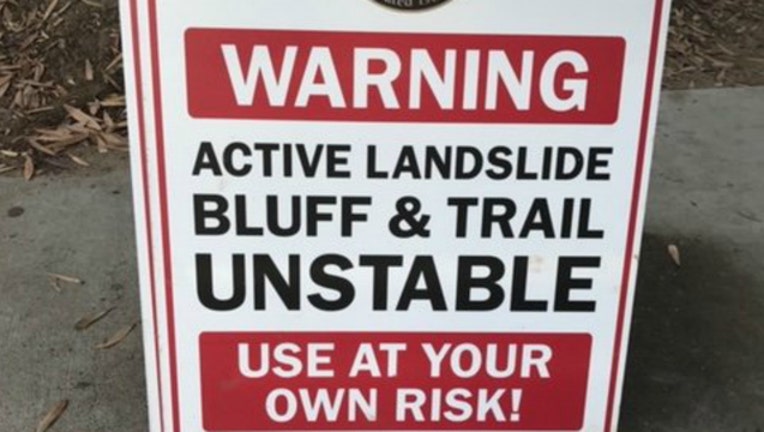 Authorities and relatives say three beachgoers killed when a Southern California sea cliff collapsed on them were members of a family.

The email says the victims were part of a family gathering at Grandview Beach celebrating Cox's surviving breast cancer.

Two other people were hurt when tons of sandstone came tumbling down.

Officials on Saturday reopened much of the beach.

Officials have reopened much of a Southern California beach where a sea cliff collapsed, killing three people.

Encinitas Lifeguard Capt. Larry Giles said Saturday that a lifeguard will be posted near the collapse zone on Grandview Beach, which is still marked by yellow caution tape. Someone left a bouquet of flowers on a rock.

A 30-foot-long hunk of the cliff in San Diego County collapsed Friday afternoon. Rescuers rushed to dig out victims, but a woman died at the scene and two more victims died at hospitals. Two other people were injured. All were adults.

Geologists are on scene. Giles said the collapse did not put the homes on top of the cliff in immediate danger.

A popular Southern California surfing beach is closed after a sea cliff collapsed, sending tons of sandstone onto beachgoers and killing three people.

The cliff near Grandview Beach in the Encinitas area is still considered unstable, although clifftop homes are said to be in no immediate danger.

Authorities say a 30-foot-long slab of the cliff collapsed Friday afternoon. Rescuers rushed to dig out victims, but a woman died at the scene and two more succumbed at hospitals.

Two other people also were injured. All were adults.

Dogs and heavy equipment were brought in to search for other victims, but none were found.

Authorities say cliffs in the area are subject to natural erosion. Several people have been killed or injured over the years in bluff collapses.