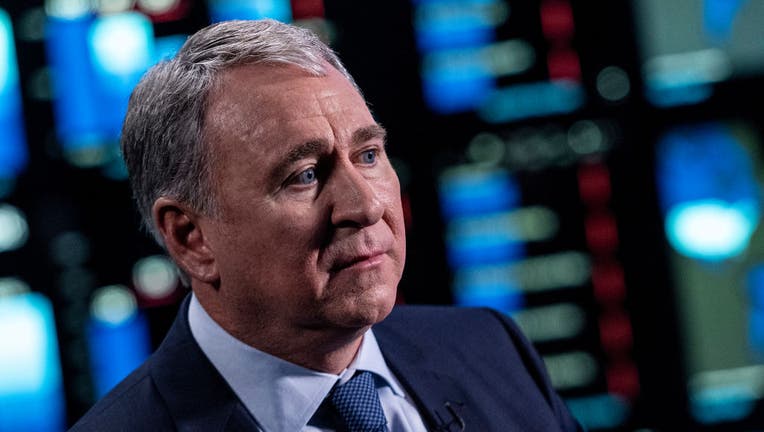 Ken Griffin, chief executive officer and founder of Citadel Advisors LLC, during an interview for an episode of "Bloomberg Wealth with David Rubenstein" at the Citadel office in Chicago, Illinois, U.S., on Friday, Feb. 25, 2022. Photographer: Christo

SPRINGFIELD, Ill. - They have been dubbed "The Griffin Slate," based on the expectation that the Republicans running together for some of the state’s top offices will enjoy the financial backing of Ken Griffin, the richest person in Illinois.

But other than GOP candidate for governor Richard Irvin, none of the others on the slate has reported receiving any contributions from the hedge-fund billionaire — or many large donations from anyone else in the two months they’ve been running for statewide office.

Griffin, who donated $20 million to Irvin’s campaign for governor over a month ago, hasn’t given a dime to the other members of the slate headed by the Aurora mayor and his lieutenant governor running mate, state Rep. Avery Bourne, according to Illinois State Board of Elections records.

After announcing their campaigns within days of one another in early January, the six Republican hopefuls appeared together for the first time earlier this month at a Springfield campaign event.

Most won’t say whether they have spoken with Griffin or anyone on his team about what financial support might be coming from the founder and CEO of Chicago-based Citadel.

Milhiser is the only one who has reported receiving any individual contributions of $1,000 or more since kicking off his campaign. He reported nine donations ranging from $1,000 to $5,000 made on two days in early March, totaling $28,654.48.

Hedge fund billionaire Ken Griffin has donated $20 million to the campaign of Aurora Mayor Richard Irvin, who is running for Illinois governor against JB Pritzker.

Kim, in his second bid for attorney general, hasn’t reported a contribution of $1,000 or more since 2013. At the end of last year, the Deerfield attorney reported a campaign fund balance of just $41.93.

Comptroller candidate Teresi had even less than that in her campaign account, with $35.40 on hand at the end of 2021. Records show her committee has never reported receiving a contribution of $1,000.

Single donations of at least $1,000 that are made to campaign committees must be reported to the state within five business days of their receipt. Known as A-1s, the reports don’t account for the smaller contributions that campaigns could be raking in.

Demmer hasn’t submitted an A-1 report to the state since December, but the legislator already had over $532,391.41 in his campaign account at the end of last year.

"It’s an ongoing effort. This is a big state. We’ve got to have the resources to be able to compete in November across the entire state of Illinois," Demmer said.

The Dixon Republican told the Sun-Times there’d been no word about whether his campaign would be receiving support from Griffin, but he said, "I’ve spoken with some people that are associated with him."

A spokesperson for Kim, Milhiser and Teresi declined to say whether the candidates for attorney general, secretary of state or comptroller have had any contact with Griffin or any of his associates about financial help, saying the campaigns were "still being built out."

"Fundraising events are being planned right now. In the meantime, each of the candidates is continuing to have important conversations with voters every opportunity they are able to," the spokesperson said in an email to the Sun-Times.

Griffin, who is worth an estimated $28.3 billion, according to Forbes, said in November he was "all in" to support a candidate to beat Democratic Gov. J.B. Pritzker. After publicly endorsing Irvin as that candidate in mid-February, the billionaire has been silent on whether he’ll support the other members of the Republican slate.

Griffin spokesperson Zia Ahmed declined to comment on whether Griffin has had contact with Kim, Milhiser, Teresi or Demmer — or if he has plans to donate to their campaigns.

Some political experts believe Griffin will put money into their campaign accounts as the June 28 primary gets closer.

"From my perspective, if you were to spend a lot of money right now advertising your candidacy for a down ballot race, it would be kind of lost in the shuffle of everything else that’s going on," said Charlie Wheeler, a professor emeritus at the University of Illinois at Springfield.

Kent Redfield, a professor emeritus of political science at the University of Illinois at Springfield and a campaign finance expert, said Griffin may be waiting to see if the candidates survive their first hurdle on their way to statewide office.

"I think there was a judgment that if we get through the primary and these people win the Republican nomination, then we’ve got something we can work with that will be value added to our effort to win the governor’s office by contesting the Democrats with a unified message from top to bottom," Redfield said.

"If they don’t get the slate through, they really haven’t lost anything. Most people are not aware that they exist or are running."

Although none of the candidates are running unopposed in the primary, it’s Irvin who is facing the most competition. Other Republicans in the gubernatorial primary include state Sen. Darren Bailey of Xenia, business executive Gary Rabine of Bull Valley, investor Jesse Sullivan of Petersburg, former state Sen. Paul Schimpf of Waterloo and Wheaton resident Emily Johnson.

In the race for attorney general, Kim is vying for the GOP nomination against Tom DeVore, a southern Illinois lawyer known for a string of lawsuits against Pritzker’s COVID-19 mitigation measures, and Chicago attorney David Shestokas.

It's a big, seven-figure boost for the campaign war chest of Republican State Sen. Darren Bailey, now a candidate for governor in the June primary election.

Whoever wins that nomination will face Attorney General Kwame Raoul in November. The Democratic incumbent reported just over $995,000 in his campaign account at the end of last year and has raised more than $101,000 since then.

The Irvin-headed slate’s candidates for secretary of state, comptroller and treasurer face primary challenges from candidates running under the "We Are The People Illinois" banner, a lesser known group of Republicans who argue the 2020 election was fraudulent.

Milhiser is vying against former Chicago Police sergeant Michelle Turney, Teresi against Carol Stream resident Michael Kinney and Demmer against Lake Bluff resident Patrice McDermand. None of the "We Are The People Illinois" candidates has registered campaign committees with the state.

If Teresi succeeds in beating out Kinney, she’ll battle Comptroller Susana Mendoza in November. The Democratic incumbent reported just over $603,000 at the end of December.

In addition to Turney, Milhiser is also vying against state Rep. Dan Brady in the primary for secretary of state. The Bloomington Republican had $250,718 in his campaign coffers at the end of last year. Brady reported 18 contributions since the beginning of February, totaling $24,500.

The Democrats vying for the secretary of state nomination have reported considerably more fundraising activity.

Former state treasurer Alexi Giannoulias had more than $4 million in his campaign fund at the beginning of the year. Chicago City Clerk Anna Valencia had $883,000 on hand to start the year. South Side Ald. David Moore (17th) reported about $82,000 in his campaign at that time.

If he beats McDermand, Demmer will face Democratic incumbent Michael Frerichs in November. The treasurer had more than $1.8 million in his campaign war chest at the end of last year.

Assuming the members of the "Griffin Slate" survive their primary battles, they will likely need to ramp up their own fundraising quickly.

"People run effective campaigns statewide with $5 [million] or $10 million, but that usually fits in with working with party organizations and stuff," Redfield said.