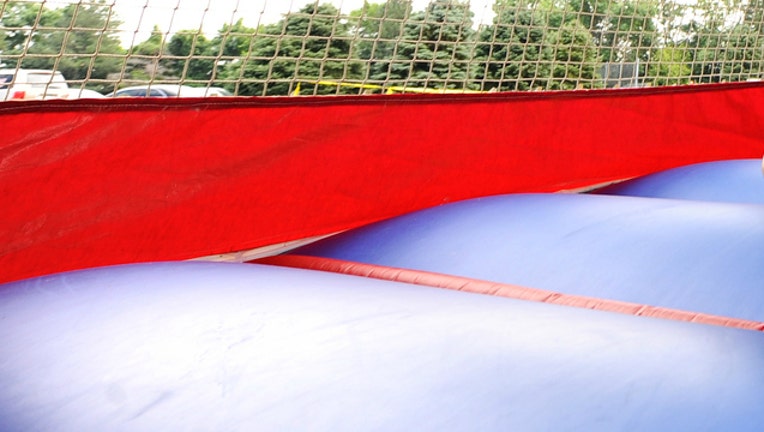 LINCOLN, Neb. (AP) - A 2-year-old Nebraska boy was killed and his sister was injured when wind tore a giant inflatable from its moorings and tossed it 30 feet (9 meters) into the air before depositing it, with the toddler wrapped up inside, more than 100 feet (30 meters) away, authorities said Friday.

"It's certainly a tragic situation," said Lancaster County Sheriff's Capt. Tom Brookhouser. "The sheriff's office has never worked an incident like this in the 28 years I've been here."

The siblings were playing on the bounce pillow - similar to a bounce house, but without any walls - around 6 p.m. Wednesday when an estimated 59 mph (95 kilometers per hour) wind gust tore it from its moorings.

Raymond Fire Safety Officer Nick Monnier told the Lincoln Journal Star that the children's parents had just climbed off the inflatable when the wind swept it up. Monnier said Arra was thrown about 30 feet, but that the pillow folded over on top of Caleb Acuna and carried him more than 100 feet.

A nearby bounce house was also blown away by the same wind gust, he said.

Brookhouser said authorities are still investigating, and that an autopsy is planned.

The National Weather Service had issued a wind advisory for Wednesday afternoon, warning of gusts up to 60 mph. Winds throughout the day consistently exceeded 20 mph (32 kph).

The large, pillow-shaped inflatables are common at county fairs and on lakes. Manufacturers commonly warn that they should not be used when winds exceed 20 mph.

The Lancaster County Board of Commissions in August approved an amusement license for the pumpkin patch, according to the Journal Star.

Winds have toppled inflatable rides before, usually resulting in bumps and bruises, but some accidents have been fatal.

A Pennyslvania man died in June 2010 just days after an inflatable slide collapsed and pinned him at a Cleveland Indians baseball game. In March 2010, a 5-year-old boy was killed when he fell off an inflatable and landed on a concrete floor in Wichita, Kansas.

In England, a 7-year-old girl died in March 2016 after heavy winds swept up an inflatable bounce house where she was playing. And in July of this year, a 3-year-old from England was killed while bouncing on an inflatable trampoline that collapsed.

Regulating amusement rides is left up to each state. While most have laws and inspectors overseeing mechanical rides at amusement parks and fairs only a handful give inflatables the same scrutiny. Nebraska does not regulate inflatables.