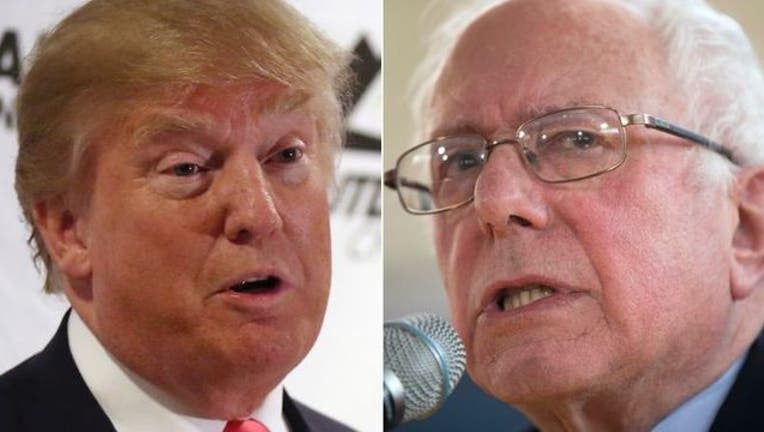 WASHINGTON (AP) - Donald Trump has provisionally accepted Bernie Sanders' proposal to debate, but the billionaire is setting a high price for participating. His condition: The hosting TV network would have to put up millions of dollars for charity.

Representatives for Fox News, ABC News and CBS News say the networks are interested in hosting such a showdown but would not comment on whether they'd be willing to put up the $10 million Trump is demanding for women's health causes. "We're always interested in more opportunities to hear from the candidates," said ABC spokeswoman Julie Townsend.

Trump said Thursday a host network would make millions from sky-high ratings and should agree to turn over at least $10 million to women's health causes.

Overlooking the impediment of Trump's price tag on his acceptance, Sanders tweeted that he was delighted that Trump accepted, adding: "Let's do it in the biggest stadium possible."

Trump and Sanders see potential benefits for pursuing a prime-time event that would be unprecedented, pitting the presumptive Republican nominee against the clear Democratic underdog — and excluding likely Democratic nominee Hillary Clinton.

But it's far from clear any such showdown will happen. In September, Trump proposed that CNN donate profits from the second GOP debate to charity. CNN never responded to the request, and the idea was dropped.

Clinton told reporters Thursday that she understood the proposal for a Sanders-Trump debate was "a joke" and she's looking forward to debating Trump in the general election campaign. Sanders spokesman Michael Briggs said the idea was no joke. "We're serious and hope Mr. Trump is, too," Briggs said.

He said Clinton declined to join Sanders in another Democratic debate. "The Clinton campaign had its chance but chose instead to insult the voters of California by reneging on her commitment to a debate here in May," Briggs said. He was referring to the June 7 California primary.

Leaving out Clinton could have the effect of belittling her, despite her commanding position on the verge of the Democratic nomination, and could give both men free shots at her decades in public service as part of the establishment they both deride.

For the publicity-loving Trump, such an event would allow him to make a pitch for Sanders supporters who are watching, along the lines of the populism that both men profess. Lately, Trump has been saying that Sanders is right on some issues, although they are fundamentally far apart on many.

For Sanders, appearing onstage with fellow native New Yorker Donald Trump would draw attention beyond his larger-than-expected base of young supporters.

Kelly McBride, a journalistic ethics expert and vice president at the Poynter Institute, said the idea of a charitable donation as a requirement "creates the perception of a conflict of interest but I don't think it creates a real conflict of interest." She said networks already compromise themselves by negotiating with campaigns over the moderators and formats for debates.

The back and forth came the same day an Associated Press count of GOP delegates found that Trump has enough support to exceed the 1,237 delegates required to win the GOP nomination. Sanders, in contrast, is far behind Clinton, who is 75 delegates short of the 2,383 needed to win the Democratic nomination. Clinton has commitments of support from 2,308 delegates to Sanders' 1,539.