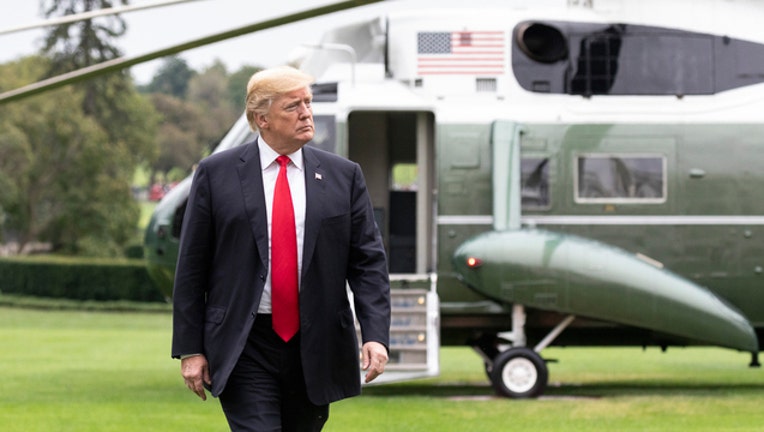 WASHINGTON (AP) — President Donald Trump blamed the media Thursday for a "very big part of the Anger we see today in our society," as law enforcement scrambled to find those responsible for sending pipe bombs and other suspicious packages to a list of prominent Democrats including Barack Obama and Hillary Clinton and to CNN.

A day after CNN's New York headquarters were evacuated after receiving one of the devices, Trump lashed out at the media on Twitter.

"A very big part of the Anger we see today in our society is caused by the purposely false and inaccurate reporting of the Mainstream Media that I refer to as Fake News," Trump wrote. "It has gotten so bad and hateful that it is beyond description. Mainstream Media must clean up its act, FAST!"

The comments were the latest in Trump's long-running attacks against the media. And they came as authorities were intercepting more suspicious packages addressed to actor Robert De Niro, another vocal Trump critic, and former Vice President Joe Biden, who has also criticized Trump.

At a rally in Wisconsin Wednesday night, Trump decried the threat of political violence and called on the media to end its "hostility" after authorities intercepted bombs sent to CNN and prominent Democrats who have been the targets of some of his sharpest barbs. The scripted message was a dissonant one for the president, who has repeatedly blasted his political opponents as criminals and argued that they will destroy the country if they win control of Congress in the midterms.

"We want all sides to come together in peace and harmony," he said in Wisconsin. "Any acts or threats of political violence are an attack on our democracy itself."

The president noted the unusually subdued tone of his remarks.

"By the way, do you see how nice I'm behaving tonight?" he said. "Have you ever seen this?"

Law enforcement authorities have ascribed no motive to the crimes. Still, news of the bombs prompted immediate debate over whether increasingly personal and hard-edged rhetoric has contributed to a potentially dangerous political climate. Trump's critics have blamed him for the tone.

The president did not take any responsibility.

Those "engaged in the political arena" must "stop treating political opponents as being morally defective," he said. He also referenced high-profile incidents in which conservatives have been accosted in restaurants and public spaces by political critics.

He added: "The media also has a responsibly to set a civil tone and to stop the endless hostility and constant negative and oftentimes false attacks and stories."

Trump has frequently labeled stories he doesn't like as "fake news" and many reporters as "enemies of the people." He has also denounced his political enemies in deeply personal terms and even described those who tried to thwart his second Supreme Court nominee as "evil."

White House press secretary Sarah Huckabee Sanders called it "disgraceful" to suggest the president bears any responsibility for the packages sent to his opponents. She told reporters Thursday there's a big difference between "comments made and actions taken."

"The president is certainly not responsible for sending suspicious packages to someone no more than Bernie Sanders was responsible for a supporter of his shooting up a Republican baseball field practice last year," she said, referring to the shooting that badly injured Rep. Steve Scalise and others. The gunman, James Hodgkinson, had posted social media messages suggesting he targeted the team because of his political views.

Asked whether the president intended to tone down his rhetoric and personal attacks, Sanders said the president would "continue to lay out the case in the differences between Democrats and Republicans" ahead of the midterm elections next month.

Trump spoke to thousands of supporters in a central Wisconsin rally as he looked to boost struggling Republican candidates less than two weeks before the midterm elections. He visited the tiny city of Mosinee, which has a population of 4,000. He won that part of the state by double digits in 2016.

Republicans in the state have been growing increasingly nervous about the prospects of holding onto the governor's office, held by Scott Walker, let alone state Sen. Leah Vukmir's chances of picking up a U.S. Senate seat held by a well-positioned Democratic incumbent, Tammy Baldwin.

Mindful of the news, Trump refrained from delivering some of the most pointed riffs of his regular routine, including steering clear of two of his favorite targets: Clinton and California Rep. Maxine Waters, whose office appears to have been a target of two of the mail explosives.

Trump also skipped his usual litany of insults against his potential 2020 rivals, including Biden, whom he often jokes he would easily beat in a fistfight.

But he had harsh words for Baldwin, branding her Vukmir's "radical far-left opponent" who "wants a socialist takeover of health care."

And even though Trump refrained from mentioning Clinton, his crowd burst into a "Lock her up!" chant before he arrived.