Trump declines to weigh in on India’s citizenship law

President Donald Trump is refusing to speak out against a controversial new Indian citizenship law that has sparked deadly protests in New Delhi as he wraps up his visit to the country.

NEW DELHI (AP) - Defending the host who has showered him with pomp and pageantry, President Donald Trump refused Monday to speak out publicly against a controversial new Indian citizenship law pushed by Prime Minister Narendra Modi that has sparked deadly protests over discrimination against Muslims.

Asked about the law one day after violence in the Indian capital left at least seven people dead, Trump told reporters: “I don't want to discuss that. I want to leave that to India.”

The law provides fast-track naturalization for some foreign-born religious minorities but not Muslims, raising fears the country is inching nearer to a religious citizenship test.

Asked about the protests as he wrapped up his two-day visit to India, Trump said he had raised the issue of religious freedom with Modi and the prime minister was “incredible” on the subject. 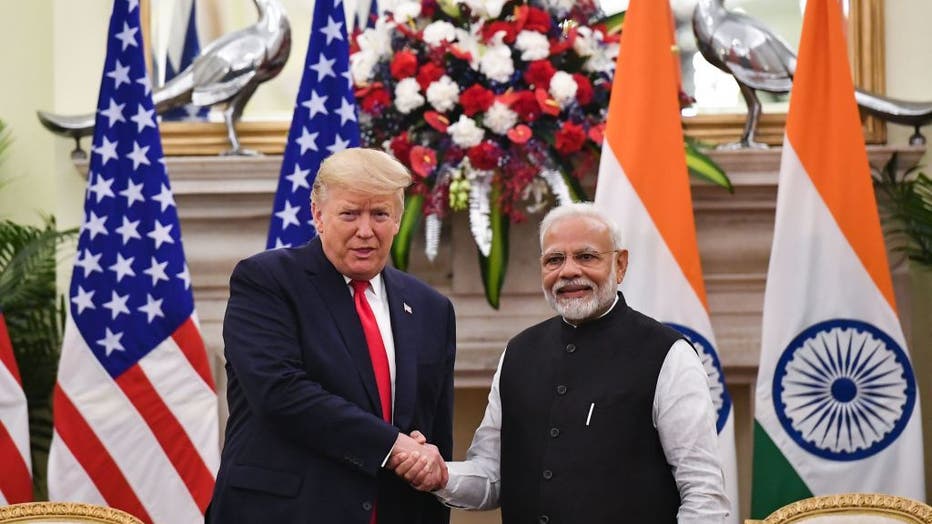 “He wants people to have religious freedom,” said Trump. The president himself proposed temporarily barring all Muslims from entering the U.S. during his 2016 campaign and successfully implemented a travel ban that targets travelers from certain majority-Muslim countries.

Trump was winding up a 36-hour visit to the continent that saw him showered with praise and adulation at every stop. Cities were plastered with billboards heralding his arrival, his travel routes were lined with enthusiastic crowds, and elaborately-costumed dancers and musicians, including some on camels, entertained him at every turn.

But as Trump was attending a massive rally in Ahmedabad and touring the gleaming Taj Mahal on Monday, at least seven were killed, including a police officer, and nearly 100 others reportedly injured in clashes between hundreds of supporters and opponents of the new Indian citizenship.

On Tuesday, protesters in several areas of northeast Delhi defied orders prohibiting the assembly of more than five people and threw stones and set some shops and vehicles on fire, a police officer said. Some homes were attacked with rocks.

Trump, for his part, returned to domestic squabbles as he lashed out at a pair of liberal-leaning Supreme Court justices and his Democratic rivals, warning of economic calamity if he loses his reelection race in November.

The Republican president also said he had not been briefed on intelligence suggesting Russia is meddling in the 2020 election, either to bolster him or Democratic candidate Bernie Sanders.

Trump had joked at the beginning of the news conference that he would be “very, very conservative” in his answers to avoid diverting attention from his “fantastic two days" in India.

Instead, he quickly launched into attacks, including criticizing Supreme Court Justices Ruth Bader Ginsburg and Sonia Sotomayor, the latter for a blistering dissent that was critical of the Trump administration’s rush to claim emergencies when asking the Supreme Court to review cases.

“What Justice Sotomayor said yesterday was highly inappropriate," he said, suggesting she and Ginsburg should excuse themselves from cases involving him or his administration.

In late March, the Supreme Court will hear two cases over subpoenas for Trump's tax, bank and financial records. The president wants the justices to reject demands for the records issued by House committees and the Manhattan district attorney.

Earlier, at a meeting with Indian business leaders, Trump abandoned the tradition of avoiding domestic political squabbles while traveling abroad and criticized the Democratic candidates who are competing for the right to challenge his reelection bid in November, warning of economic turmoil if one of them defeats him.

He said he believes the U.S. economy is being held back by the upcoming U.S. election and claimed that, “if the wrong person gets elected, everything will come to a halt" and unemployment will soar.

Trump spent much of Tuesday meeting with Modi and emerged saying he was optimistic about the prospects of ultimately completing a trade deal with India despite moves by both sides that created doubt about the ability to reach an agreement. He offered few details about what was discussed.

“Our teams have made tremendous progress on a comprehensive trade agreement and I'm optimistic we can reach a deal that will be of great importance to both countries,” Trump told reporters. He said that if a deal happens, it will likely be “towards the end of the year.”

The two countries have been engaged in a trade standoff since Trump imposed tariffs on Indian steel and aluminium exports. India responded with higher penalties on U.S. agricultural goods and restrictions on medical devices, prompting the U.S. to strip India of its decades-old trade preferences.

The day began with an elaborate welcome ceremony in front of the grand Rashtrapati Bhavan Presidential Palace in New Delhi, continuing the pomp and pageantry the Indian government had lavished on Trump a day earlier.

Cannons fired as the president's armored car rolled through the palace gates accompanied by red-uniformed guards on horseback. The ceremony included hundreds of military officials, marching with instruments and swords, as well as an official greeting by India's president and Modi.

“The last two days were amazing in every sense of the word," Trump said, describing the trip as “unforgettable,” “extraordinary” and an expression of “love."

Trump also addressed the coronavirus outbreak, which has begun to spook the U.S. stock market. Trump said the administration had asked Congress for an additional $2.5 billion to help get the U.S. ready “just in case something should happen” and to assist countries he says are ill-equipped to deal with the virus' spread on their own.

Trump was set to attend an opulent state dinner at India's presidential palace before returning home — a last stop on a trip that began with a massive “Namaste Trump” rally in Modi's home state.

On Tuesday, the couple participated in a wreath-laying ceremony at Raj Ghat, a memorial to Mohandas Gandhi in New Delhi at the site where the famed Indian independence leader was cremated after his assassination in January 1948. Trump had visited Gandhi's home on Monday.