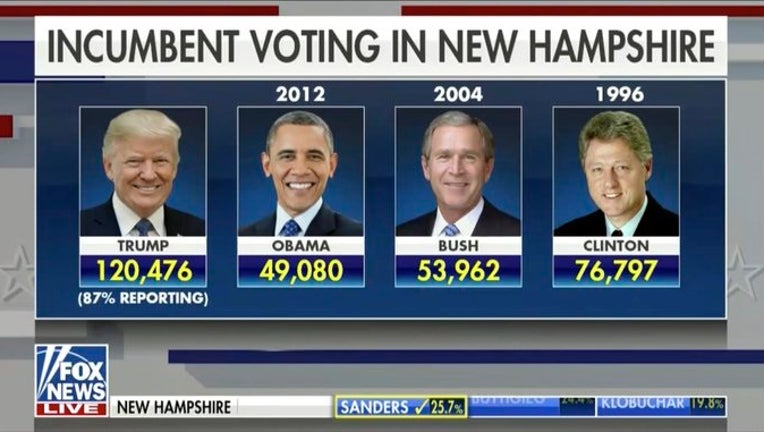 President Trump didn't have a serious challenger in the New Hampshire primary, but he still turned out enough voters to more than double former President Barack Obama's 2012 vote total in the state, indicating that the Republican base is all-in on Trump as he prepares to face the eventual Democratic nominee in a reelection battle this November.

With 87 percent of precincts reporting, Trump secured more than 120,000 votes in the Granite State. In 2012, Obama managed just 49,080 total votes in New Hampshire. The gap between the two presidents is likely to increase as more precincts report their totals Wednesday.

It follows a coordinated effort by the Republican National Committee and the Trump campaign to drive up turnout for Trump in New Hampshire -- something the other incumbents didn't do. Trump himself revved up his supporters at a packed and fiery rally in Manchester, N.H., on Monday, the eve of the state's primary.

"Nine months from now, we are going to retake the House of Representatives, we are going to hold the Senate, and we are going to keep the White House," Trump said to thunderous applause. "We have so much more enthusiasm, it's not even close. They're all fighting each other."

In the line to get into Trump's Monday rally, many of his voters seemed to have a zeal uncommon for supporters of an incumbent president.

Jay McDonald of North Providence, R.I., said he “100 percent" supported Trump four years ago and "nothing’s changed.” McDonald said he’s "maybe more angry that they could do that [impeachment] to a president and get away with it over nothing."

"Hopefully he picks up more voters – the independent people – over that,” McDonald said.

Democrats largely owned the turnout in New Hampshire Tuesday -- first and second place finishers Bernie Sanders and Pete Buttigieg combined for almost 140,000 votes with 87 percent reporting -- but the Democratic primary is still wide open and there was almost nothing at stake for Trump in the New Hampshire race. His only primary challenger on the ballot was former Massachusetts Gov. Bill Weld, who had less than 10 percent of the GOP vote with 87 percent in.

The throngs that showed up for Trump's Monday rally at Southern New Hampshire University were more than the school's venue could hold with its 11,000 capacity, and the president took the opportunity to tout his accomplishments and knock Democrats in front of the large audience.

"To support working families, we have reduced the cost of child care, expanded paid leave, and given 40 million American families an average of $2,200 more in their pockets thanks to the Republican child tax credit," Trump asserted. "We are the party of equal opportunity for all Americans.

He added: "While the extreme left has been wasting America's time with this vile hoax, we've been killing terrorists, creating jobs, raising wages, enacting fair trade deals, securing our borders, and lifting up citizens of every race, color, religion, and creed!"

The Trump campaign also touted a record turnout for an incumbent in the Iowa caucuses, which came on the same night that Democratic turnout fell well below expectations.

About 176,000 Iowa Democrats attended their precinct caucuses, a slight uptick from 2016 but fewer than expected. That total is nowhere near the party's 2008 numbers, when roughly 238,000 Iowans participated in the kickoff clash among Hillary Clinton, Barack Obama, onetime Iowa favorite John Edwards, and a handful of others.

“It was lower than I expected,” said former Iowa Democratic Party executive director Norm Sterzenbach, who has been advising Minnesota Sen. Amy Klobuchar’s campaign. “It was definitely lower than what the conventional wisdom was.”

The New Hampshire numbers come as the president's supporters have been fired up in recent days: Just last week Trump was acquitted of two articles of impeachment, gave a largely well-received State of the Union and ran up the score in Iowa. Meanwhile, Democrats have been running attack ads on each other, dealing with the fallout of House Speaker Nancy Pelosi, D-Calif., tearing up Trump's speech at the end of the State of the Union and roiling from an Iowa caucus debacle that still does not have an official winner.

When asked about the Democratic field outside of the president's New Hampshire rally, one of Trump's fervent supporters, Air Force Veteran Mike Grunwald, gave a frank assessment of the party's chances to unseat Trump in November.

"They're all going to lose," he said. 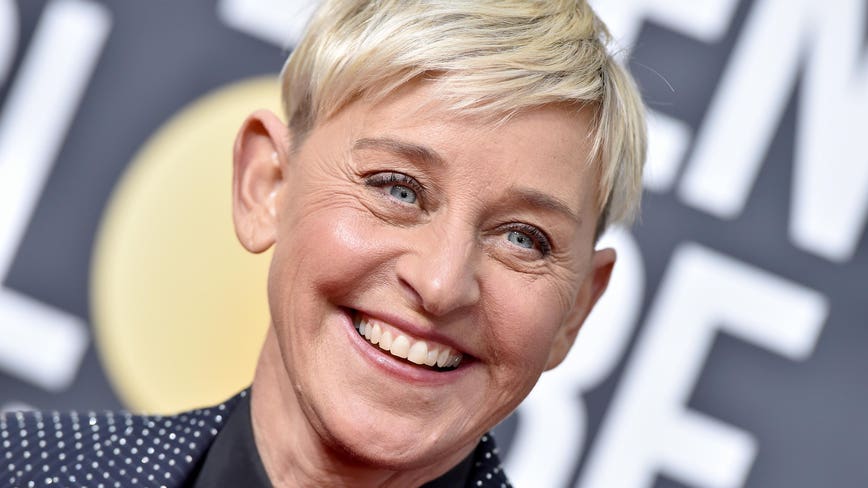 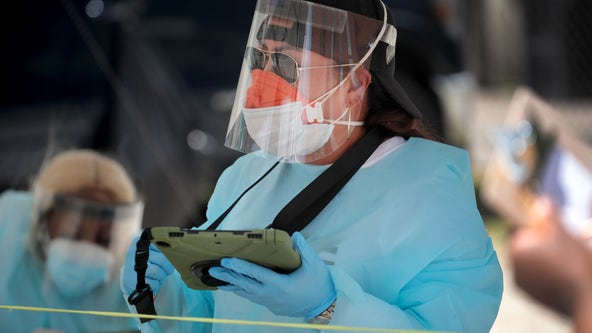 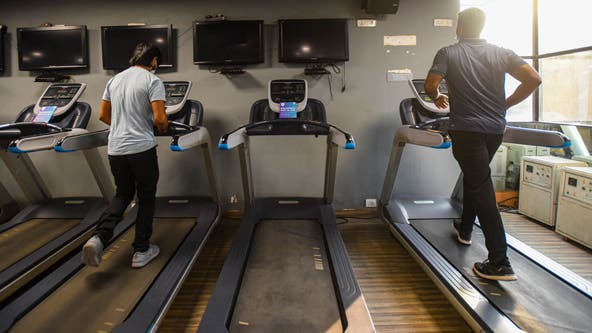