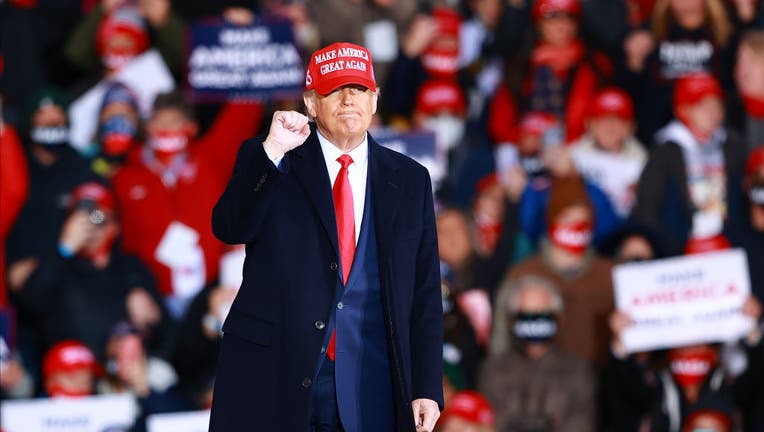 MUSKEGON, MI - OCTOBER 17: U.S. President Donald Trump gestures during a campaign rally on October 17, 2020 in Muskegon, Michigan. President Trump has ramped up his schedule of public events as he continues to campaign against Democratic presidential

CHICAGO - A federal appeals court has allowed a Trump administration rule that would deny green cards to immigrants who use public benefits like food stamps to go back into effect while it considers the case.

The Election Day development was the latest dizzying twist in a legal battle over the controversial rule that the Trump administration argues helps ensure those who are self-sufficient come to the country.

On Monday, U.S. District Judge Gary Feinerman in Chicago struck down the rule and U.S. Citizenship and Immigration Services stopped applying it to pending applications. Government attorneys appealed, and the 7th U.S. Circuit Court of Appeals put a hold on the ruling the next day, allowing the restrictions to take effect again.

USCIS spokesman Matthew Bourke said Wednesday that the agency would immediately restart applying the rule to pending cases, but not “re-adjudicate any applications or petitions that were approved” in light of Monday’s decision.

Under the Trump administration rule, officials can deny permanent residency to legal immigrants over their use of food stamps, Medicaid or other public benefits. Green card applicants must show they wouldn’t be burdens to the country, or “public charges.”

Immigrant rights advocates deemed it a “wealth test,” while health experts warned of poorer health outcomes and rising costs as low-income migrants chose between necessary services and trying to stay in the country legally.

The Illinois Coalition for Immigrant and Refugee Rights and Cook County filed the lawsuit in Chicago and planned to submit arguments to the appeals court this month.

“It’s no surprise that Trump’s team is attempting to remove barriers that wouldn’t allow enforcement of his unlawful public charge definition, even after the courts clapped back at him earlier this week,” Cook County State’s Attorney Kim Foxx, whose office argued the case, said in a statement Wednesday. “I have confidence that the law will prevail here and immigrants across America will be treated fairly as human beings while this gets sorted in the appeal process.”

Democrat Joe Biden has promised to end the policy if he’s elected president.

The rule has already been heavily litigated.

In January, the U.S. Supreme Court reversed a hold on the policy after lawsuits. However, enforcement was halted by a federal judge in New York because of the coronavirus pandemic. By September, the 2nd U.S. Circuit Court of Appeals had reversed that hold and the rule took effect nationwide.