The Capitol Hill maneuvering will be complemented by high-stakes efforts on both sides of the aisle to claim political advantage from the proceedings.

WASHINGTON - President Donald Trump's impeachment trial enters a pivotal week as his defense team resumes its case Monday and senators face a critical vote on whether to hear witnesses or proceed directly to a vote that is widely expected to end in his acquittal.

The articles of impeachment charge Trump with abuse of power and obstruction of Congress.

Those decisions on witnesses may be complicated by reports that Trump said he wanted to maintain a freeze on military assistance to Ukraine until it aided political investigations into his Democratic rivals. That's from former national security adviser John Bolton in a draft of his forthcoming book. The report by The New York Times was later confirmed by The Associated Press. The revelation challenges the defense offered up by Trump and his attorneys in his impeachment trial.

The Capitol Hill maneuvering will be complemented by high-stakes efforts on both sides of the aisle to claim political advantage from the proceedings as the presidential nominating season kicks off in Iowa on Feb. 3. 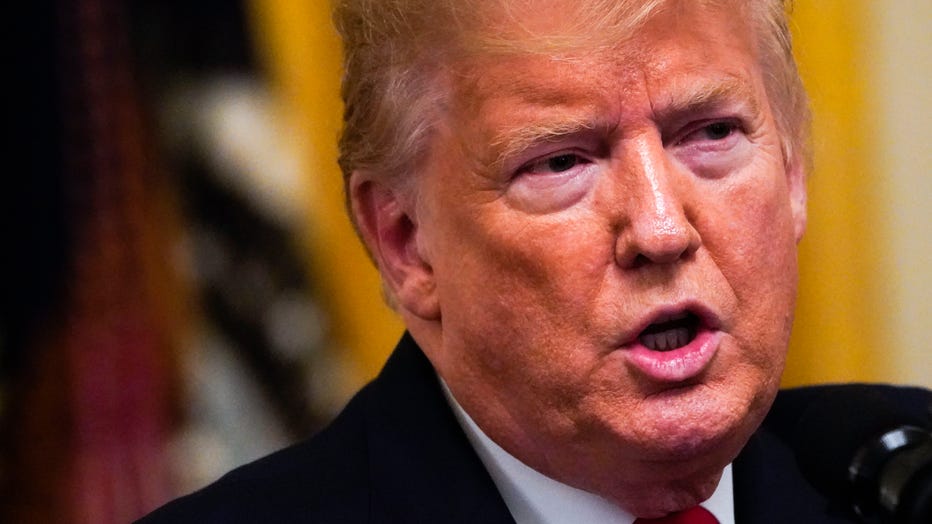 President Donald Trump speaks in the East Room of the White House during an event with U.S. mayors on Jan. 24, 2020 in Washington, D.C. (Photo by Drew Angerer/Getty Images)

Here's what to watch as the Senate impeachment trial resumes Monday:

A BOLT FROM BOLTON

Bolton's testimony has been the subject of fierce debate for months, but it leaped to the forefront as news leaked of his claims in a forthcoming book. Bolton writes that Trump told him he wanted to withhold security aid from Ukraine until it helped him with investigations into Biden. Bolton's written account, first reported by The New York Times, was confirmed to The Associated Press by a person familiar with the manuscript on the condition of anonymity.

Republican Sen. Susan Collins of Maine said the report about Bolton's book “strengthens the case” for witnesses, while Sen. Mitt Romney, R-Utah, said it's "increasingly clear that what John Bolton would have to say would be important for those of us asked to render impartial justice.”

Alaska Sen. Lisa Murkowski, a key Republican moderate, said she has long been curious about what Bolton might have to say, adding that "I'm still curious.''

Trump denied Bolton's claims in tweets early Monday. “I NEVER told John Bolton that the aid to Ukraine was tied to investigations into Democrats, including the Bidens," Trump wrote. "If John Bolton said this, it was only to sell a book.”

Trump said people could look at rough transcripts of his call with Ukrainian President Volodymyr Zelinskiy to see there was no pressure for such investigations to get the aid. In that July 25 call, Trump asked Zelinskiy to “do us a favor” with the investigations as he was withholding nearly $400 million in military aid to the U.S. ally at war with Russia.

Trump falsely claimed Monday that the Democrat-controlled House “never even asked John Bolton to testify." Democrats asked Bolton to testify, but he didn’t show up for his deposition. They later declined to subpoena Bolton, as they had others, because he threatened to sue, which could have led to a prolonged court battle.

While the news media focused on Bolton, White House lawyers sought to turn scrutiny to Hunter Biden, who served on the board of Burisma, one of Ukraine’s largest natural gas companies.

Former Florida Attorney General Pam Bondi, representing the White House, said Burisma was known to be corrupt and that Hunter Biden served on the board at the same time his father was leading the Obama administration's anti-corruption efforts in Ukraine. Bondi offered no evidence of wrongdoing by either Biden, but said Democrats had improperly tried to dismiss questions raised by the younger Biden's role with Burisma.

"Their case crumbles" if there's something worth investigating about the company and Hunter Biden's role, she said.

Sen. Patrick Leahy, D-Vt. said Bondi's complaint about the appearance of a conflict of interest was "as hypocritical as it is irrelevant to the serious evidence before the Senate.''

Joe Biden, campaigning in Iowa, said he saw no reason for him or his son to testify.

“I have nothing to defend,'' Biden told reporters. "This is all a game. No one has said I’ve done anything that was wrong, period. ... The reason he’s being impeached is because he tried to get a government to smear me and they wouldn’t. Come on.”

After a two-hour opening argument Saturday, Trump's defense team will lay out its case in depth beginning Monday. White House counsel Pat Cipollone said Trump's lawyers don't expect to take the full 24 hours allotted to them, but there will be arguments from some familiar faces.

Dershowitz said Sunday he would argue that the charges against Trump are too minor to warrant the Republican president's removal from office under the Constitution. “Even if true, they did not allege impeachable offenses," Dershowitz told "Fox News Sunday."

The Trump team has also teased the notion that it would draw attention to Joe Biden and his son Hunter, who served on the board of a Ukraine gas company Burisma, while the elder Biden was vice president. An extended focus on Joe Biden, one of the leading Democratic presidential contenders, could mean blowback from even some of the GOP members of the Senate.

Once Trump's team concludes, senators will have 16 hours to ask questions of both the House impeachment prosecutors and the president's legal team. Their questions must be in writing.

Chief Justice John Roberts will read the questions aloud. He is expected to alternate between both sides of the aisle. Many senators have been talking copious notes throughout the trial in preparation for the question-and-answer time.

Sen. John Barrasso, R-Wyo., told reporters Saturday that Republicans expected to get together on Monday to start formulating a list of questions. “We will meet as a conference and decide what questions we want to pose, what the order may be of those of those questions,” he said.

WILL THEY OR WON'T THEY

Under the Senate rules passed last week, senators will get another chance to vote whether to consider new witnesses and evidence after the Q&A time is elapsed. Four Republicans would have to break ranks to join Democrats in the GOP-controlled Senate to extend the trial for an undetermined amount of time.

If that happens, expect a bitter fight over which witnesses might be called and which documents might be subpoenaed. Democrats have called for testimony from Trump's former national security adviser, John Bolton, and his acting chief of staff, Mick Mulvaney. An attempt to call either probably would lead to a showdown with the White House, which claims both men have “absolute immunity" from being called to testify before the Senate, even in an impeachment trial. Still, Bolton has said he would appear if issued a subpoena by the Senate.

While Republicans have hoped for a speedy trial, Trump has called for the testimony of the Bidens and the intelligence community whistleblower whose summer complaint about Trump's July telephone call with Ukraine's leader instigated the impeachment inquiry.

But some Republicans, including Sen. Lindsey Graham, R-S.C., have expressed resistance to calling those witnesses.

If the vote fails, the Senate could move swiftly to its vote on whether to remove or acquit Trump, giving the president the result he's been looking for as soon as the end of the week.

Senate rules also call for four hours of deliberations before voting. Since senators are required to sit silently during the trial, expect a closed session where they can deliberate in private.

Trump's lawyers argued Saturday that no one knows what Trump's motives were on holding up military assistance to Ukraine. A recording obtained by The Associated Press hours later suggests the president well understood that assistance was a point of leverage over Ukraine.

The recording is of 2018 meeting at the Trump Hotel in Washington that Trump had with donors, including two now-indicted associates of his personal attorney, Rudy Giuliani. The audio portion includes Trump inquiring about Ukraine, “How long would they last in a fight with Russia?”

He later calls for the firing of the U.S. ambassador to Ukraine, Marie Yovanovitch.

The recording contradicts the president’s statements that he didn't know the Giuliani associations, Lev Parnas and Igor Fruman. They are key figures in the investigation who were indicted last year on campaign finance charges.

If new evidence and witnesses are allowed, the recording could take center stage in the Senate proceedings.

The trial is resuming with one week to go until the Iowa caucuses, and is again keeping four Democratic contenders — Sens. Bernie Sanders, Elizabeth Warren, Michael Bennet and Amy Klobuchar — in Washington instead of campaigning at a critical point in the race.

While they are trapped in Washington, Trump will venture outside the capital as he seeks both to exert political retribution on Democrats who impeached him and reward a party-switching lawmaker who backed him in the House.

Trump will hold a rally Tuesday in New Jersey to repay the favor to Rep. Jeff Van Drew, who became a Republican last month after voting against the articles of impeachment as a Democrat. And Trump is set to appear in Iowa on Thursday, days before the caucuses.

Meanwhile, Trump is already looking ahead to his likely acquittal, whenever it may come, promising that Democrats will face consequences for trying to remove him from office. “Shifty Adam Schiff is a CORRUPT POLITICIAN, and probably a very sick man,” Trump tweeted Sunday. “He has not paid the price, yet, for what he has done to our Country!”

White House Press Secretary Stephanie Grisham told Fox News Channel's “Fox & Friends” Monday morning that Trump meant that there would be “consequences with the American people and at the ballot box” for Democrats as a result of the impeachment push. She accused Schiff of "grandstanding."

“I think he's got some thin skin there. I think he was grandstanding once again. And you know, playing the pity card that he just got threatened by the president," she said. "I think people see through that."

Schiff, D-Calif., is chairman of the House Intelligence Committee and the lead impeachment manager. Asked on NBC's "Meet the Press'' whether he viewed the tweet as a threat, Schiff replied, "I think it's intended to be.''

Rep. Jerrold Nadler, one of the House managers for the Senate trial, will miss Monday’s proceedings because of his wife’s illness.

In a statement, the New York Democrat said he would be in New York that day to discuss with doctors his wife’s ongoing treatment for pancreatic cancer. As chairman of the House Judiciary Committee, Nadler has been a key member of the Democratic team investigating and prosecuting the case against the president.

The White House legal team is set to wrap up its case Tuesday. Senators are expected to submit written questions to the prosecution and defense later in the week before a vote on whether to call new witnesses or admit new documents.