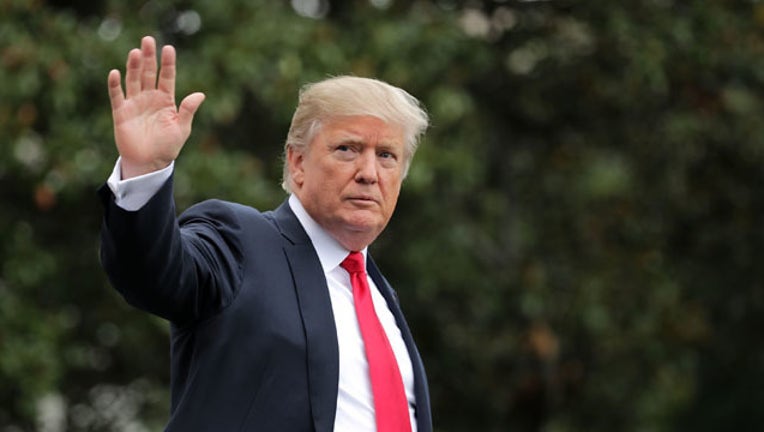 WASHINGTON (AP) -- President Donald Trump on Friday angrily accused Iran of violating the spirit of the landmark 2015 nuclear deal, blaming it for a litany of malign behavior and hitting its main military wing with anti-terrorism sanctions. But Trump, breaking with a campaign pledge to rip up the agreement, said he was not yet ready to pull the U.S. out or re-impose nuclear sanctions.

Instead, he kicked the issue to Congress and the other nations in the seven-country accord, telling lawmakers to toughen the law that governs U.S. participation and to fix a series of deficiencies in the agreement. Those include the expiration of several key restrictions under "sunset provisions" that begin to kick in in 2025, he said.

Trump warned that without the fixes, he would likely pull the U.S. out of the deal and snap previously lifted sanctions back into place. Without improvements, he said in a White House speech, "the agreement will be terminated."

"It is under continuous review, and our participation can be canceled by me as president at any time," he said in a speech from the White House.

Trump's announcement was essentially a compromise that allows him to condemn an accord that he has repeatedly denounced as the worst deal in American history. But he stopped well short of torpedoing the pact, which was negotiated over 18 months by the Obama administration, European allies and others.

Congress will now have 60 days to decide whether to put the accord's previous sanctions back into place, modify them or do nothing. Any decision to re-impose sanctions would automatically kill America's participation in the deal.

Ahead of Trump's speech, Secretary of State Rex Tillerson and other U.S. officials offered details of the president's new stance. Tillerson said Trump will ask lawmakers to come up with legislation that would automatically re-impose sanctions that were lifted under the deal should Iran cross any one of numerous nuclear and non-nuclear "trigger points."

Both defenders of the Iran nuclear deal and critics are likely to be displeased by Trump's decision. Those who support the deal believe Trump's move will badly damage U.S. credibility in future international negotiations, while opponents think he does not go far enough in unraveling the accord.

Ali Larijani, Iran's parliament speaker, said Friday that any U.S. move against a nuclear deal with Iran would be an "insult" to the United Nations because the U.N. had given the deal its blessing.

He added that any revision of the deal would allow Iran to take its own actions, and warned that the U.S. move could destabilize the international situation.

"We will continue to adhere to our obligations ... for as long as other parties observe the agreement," he said on a visit to Russia.

American allies, who have pressed the White House to remain in the nuclear accord, were closely watching the president's address. The European parties to the accord -- Germany, France and Britain -- along with the other parties, Iran, Russia and China, have ruled out reopening the deal. But some, notably France, have signaled a willingness to tackle unresolved issues in supplementary negotiations.

Among those issues are the expiration of several restrictions on advanced nuclear activity under so-called "sunset clauses" that will allow Iran to begin ramping up its enrichment capabilities after 10 years, the end of an arms embargo and the eventual easing of demands for a halt to its missile program.

In the speech, Trump hoped to "recruit" the Europeans into joining his broad strategy, particularly by punishing the Revolutionary Guard, which he and his national security team believe is fomenting instability, violence and extremism throughout the Middle East and beyond, according to one official.

In anticipation of Trump's announcements, Republican legislators have drawn up a new version of the law replacing the current 90-day timetable with "semi-annual" certifications, according to drafts seen by the Associated Press this week.

Senate Foreign Relations Committee chairman Bob Corker said in a statement on Friday that his panel had agreed to fresh certification criteria to include items that are also the province of the U.N. nuclear watchdog and require the U.S. intelligence community to determine if Iran is carrying out illicit activity in facilities to which the International Atomic Energy Agency has not had access.