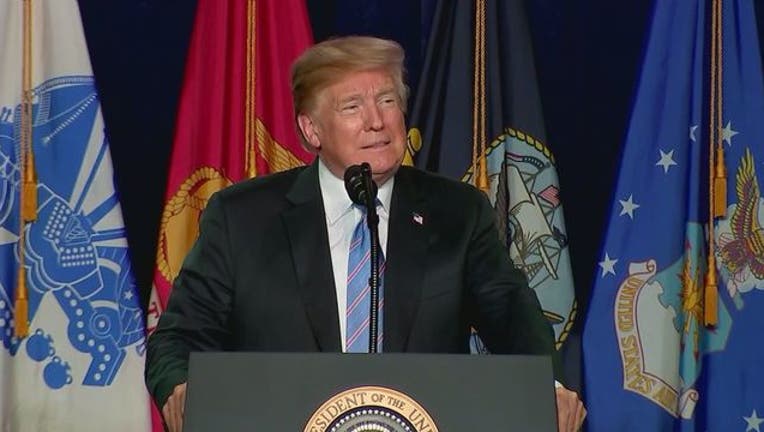 Delivering remarks at a "Salute to Service" charity dinner at the Greenbrier resort in White Sulphur Springs, West Virginia, Trump praised "Americans of every generation" who have served in the armed forces.

The event was held in conjunction with the PGA Tour's Greenbrier Classic, which has been rechristened as "A Military Tribute at The Greenbrier." The venerable resort is owned by the state's Republican governor, presidential ally Jim Justice.

Highlighting his efforts to boost spending for the military, Trump said, "As the golfers can tell you, the stronger we get, the less likely it is that we will have to use it."

An avid golfer, Trump praised the "incredible athletes" in attendance.

"These are unbelievably talented people," he said. "They're talented in their mind and in their body. Their muscles are strong, but their mind has to be stronger.

The event marked Trump's latest appearance in a state he won by more than 40 percentage points in 2016. Its Democratic senator, Joe Manchin, is seeking re-election.

Trump has criticized Manchin for voting against tax cuts the president enacted last year. Manchin is among Democrats with whom Trump recently discussed the vacancy on the Supreme Court.

Trump previewed his upcoming nomination to fill the vacancy, saying he "hit a home run" with Justice Neil Gorsuch, whom he picked for the nation's high court last year. "We're going to hit a home run here," he said.

The president also criticized calls from some Democrats to abolish U.S. Immigration and Customs Enforcement, the federal agency charged with detaining and deporting unauthorized immigrants.