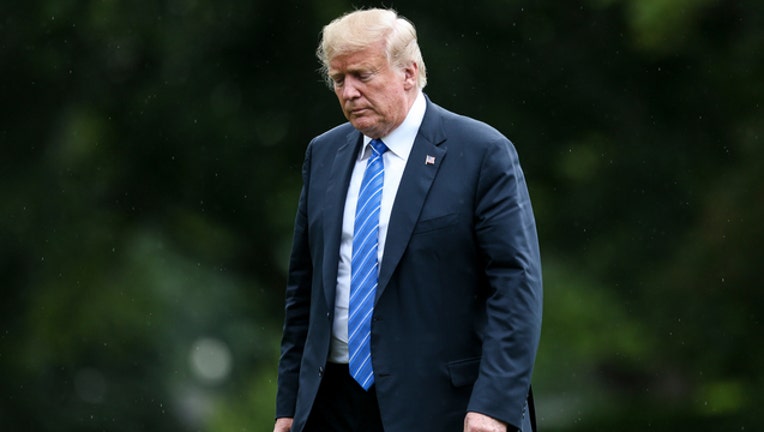 US President Donald Trump walks from Marine One as he returns from Kansas City, Missouri to the White House on July 24, 2018 in Washington, DC. (Photo by Oliver Contreras-Pool/Getty Images)

(AP) -- Two months before the 2016 election, Donald Trump and his former lawyer discussed plans to pay for a former Playboy model's story of alleged an affair, according to a secretly recorded tape of the conversation released amid an escalating feud between the president and his longtime personal attorney.

The audio recording, surreptitiously made by Trump's former personal lawyer Michael Cohen, appears to contradict the Trump campaign's later claim that the president knew nothing about a media company's purchase of model Karen McDougal's story and any efforts to keep it from becoming public.

The tape captures the soon-to-be elected president and his lawyer discussing logistics of financing and whether to "pay with cash," although the sound is muffled and Trump's instructions on that are unclear. Lawyers for Trump and Cohen are disputing what was said.

The tape was provided to CNN on Tuesday by Cohen's attorney, Lanny Davis, and signals a new level of open hostility between the president and the man who once described himself as Trump's "fixer." Cohen, who is under federal investigation for potential bank fraud and campaign finance violations, has shown a growing willingness to reveal damaging information.

On Wednesday, Trump vented on Twitter about the release of the surreptitious tape.

"What kind of a lawyer would tape a client? So sad!" he said. "Is this a first, never heard of it before? Why was the tape so abruptly terminated (cut) while I was presumably saying positive things?"

In an earlier interview, Davis said Cohen released the tape in response to an "intense campaign of disparagement" from Trump attorney Rudy Giuliani and the president's team, accusing Giuliani of "inventing words" as he disputes whether Trump referred to cash payments on the tape.

Giuliani says Trump said "don't pay with cash," which he says shows Trump was not trying to hide the potential payment.

"The word is `cash.' Everybody should listen to the tape and see whether I'm right or not," Davis said on ABC's "Good Morning America."

He also hinted that Cohen may have more to say.

"Michael Cohen has turned a corner in his life and he's now dedicated to telling the truth to everyone, and we'll see what happens," Davis said.

Asked if Cohen was still seeking a presidential pardon while under federal investigation, Davis responded simply: "No."

The taped conversation between Trump and Cohen came weeks after the National Enquirer's parent company reached a $150,000 deal to pay McDougal for her story of a 2006 affair, which it never published, a tabloid practice known as catch and kill.

The men appear to be discussing buying the rights to McDougal's story from the Enquirer's parent company. Trumps lawyers say the payments were never made.

Cohen can be heard on the tape saying that he needed to start a company "for the transfer of all of that info regarding our friend David," a possible reference to David Pecker, Trump's friend and president of the National Enquirer's parent company, American Media Inc.

When Cohen begins to discuss financing, Trump interrupts him and asks, "What financing?"

"We'll have to pay," Cohen responded.

Giuliani, told The Associated Press that he's had an expert, whom he did not name, enhance the recording and the president says "don't pay with cash."

"It clearly indicates that the president did not want to pay with cash. Suggesting otherwise is ridiculous and is inconsistent with the rest of the conversation, during which it was discussed doing it through a corporation," Giuliani said.

Giuliani said Cohen, as Trump's lawyer, thought it would be best if he could buy the rights to McDougal's story and the recording captures the two of them discussing how to do that.

"Cohen says I have to pay him. The president brings up cash and says don't pay with cash and says `check,' He wants it memorialized," Giuliani said. "Cohen then says `No, no, no, no' and he cuts off the tape. He obviously cuts it off in mid-sentence and that in itself is suspicious."

"The president wanted to do it the right way. If you wanted to hide something, you would not do it by corporation or check," he said.

Giuliani said he didn't know why the payment was never made.

Davis said he released the tape because his client has been smeared in the press and wanted to set the record straight. He noted Trump does not appear to be learning about the McDougal matter for the first time and does not appear surprised by Cohen's plans.

"Listen to the tape. Donald Trump is not shocked money is being paid about someone named Karen McDougal," Davis said during an interview with CNN.

American Media, Inc.'s payment effectively silenced McDougal through the election, though days beforehand news of the deal emerged in The Wall Street Journal. At the time, a Trump spokeswoman said his campaign had "no knowledge of any of this."

A dozen audio recordings seized during those raids were forwarded to federal prosecutors last week after lawyers dropped challenges on attorney-client privilege grounds.

Giuliani said those recordings captured Cohen discussing the president with third parties, who he would not identify. They are also being enhanced by experts, he said.

Trump and Cohen can also be heard on the recording released Tuesday discussing other legal issues, including fighting a request by The New York Times to unseal court records concerning Trump's divorce from his first wife, Ivana.