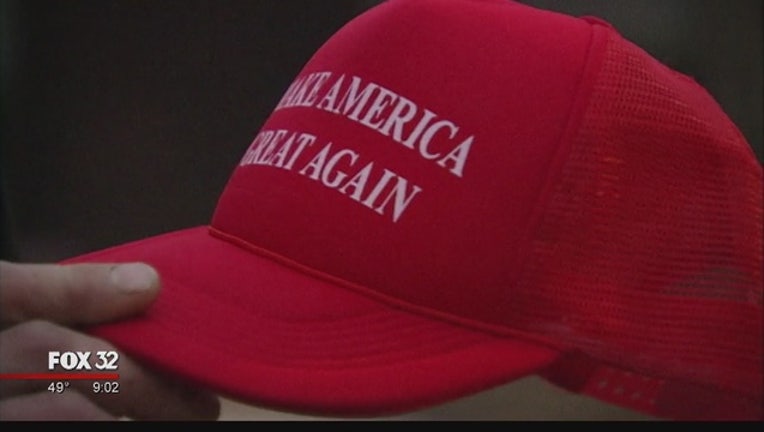 BLOOMINGTON, Ill. (AP) - Republican presidential candidate Donald Trump returned to Illinois on Sunday for a stump speech at an airplane hangar in Bloomington before a far more receptive and calmer audience than the Chicago rally that was canceled Friday night.

Trump's rally - which was briefly interrupted four times by protesters - came two days ahead of the state's primary and was his first event in Illinois since Friday, which he said was canceled out of concern for supporters and protesters who packed the hall and later erupted into a melee.

An Associated Press reporter counted fewer than 30 people being removed from the hangar in central Illinois, which officials said accommodated a capacity crowd of about 3,000. Trump observed from the stage, "See. Nobody gets hurt."

A Bloomington police spokesman said that none of those ejected from the 45-minute speech, nor anyone among the several small clusters of protesters gathered outside the Central Illinois Regional Airport, were arrested.

Following Friday's rally, the Chicago Police Department said three men from Chicago and a 45-year-old woman from Michigan were arrested and charged for participating in a disturbance at the protest, which drew thousands of people to the University of Illinois at Chicago. Two officers were hurt.

Illinois State Police and the Chicago Police Department said Sunday they are reviewing videos and officer statements following Friday's arrest of CBS News journalist Sopan Deb outside the Trump rally. Deb described on the network's "Face the Nation" show Sunday being thrown to the street by officers, and later being cited for resisting arrest.

More than 1,000 delegates in both parties are at stake Tuesday when Florida, Illinois, Missouri, North Carolina and Ohio vote.

The Clinton campaign said the former Secretary of State would hold a public event at the Plumber's JAC Local Union 130 UA, and is expected to discuss job creation. The Cruz campaign said the Texas senator would hold rallies in Rockford, Glen Ellyn, Peoria, Decatur and Springfield. Sanders will appear at Roosevelt University in Chicago after trips to Ohio, North Carolina and Missouri.

In Bloomington, some protesters said they felt emboldened to stand in a light but steady drizzle only after seeing reports of clashes at Trump rallies in Ohio and Kansas City on Saturday.

"We need to stand up and make those who are supporting him know that they ought to rethink their choice," said Suzie Smeeton, 47, a Bloomington teacher's aide. "He sounds more like a juvenile on the playground than a world leader."

But Bill Schultz, 54, of Champaign, said he attended the rally in part to counter the increased visibility of anti-Trump demonstrators. He suggested that the increased dissent on display will help the outsider candidate.

"What happened in Chicago just made Trump a lot stronger," he said.