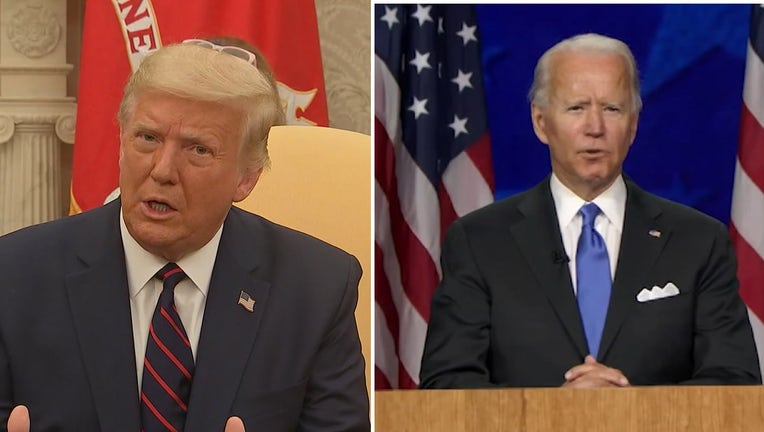 The president accused the former vice president of making false promises as the Trump campaign reiterated its claim that Biden is “a pawn of the radical leftists.”

In his acceptance speech, Biden vowed to untie an America torn apart by crises ranging from the coronavirus pandemic and the economic upheaval it has caused to partisan divides and racial inequalities.

“Here and now I give you my word, if you entrust me with the presidency, I will draw on the best of us not the worst," Biden declared. "I’ll be an ally of the light, not our darkness. And make no mistake, united we can and will overcome this season of darkness in America.”

Biden’s promises, however, fell on deaf ears from Trump and his supporters.

“In 47 years, Joe did none of the things of which he now speaks,” Trump tweeted while Biden was speaking. “He will never change, just words!”

The president’s campaign expanded on his tweet by dredging up Trump’s criticism that Biden’s campaign has been co-opted by the progressive wing of the Democratic party led by Sen. Bernie Sanders of Vermont, an independent who caucuses with the Democrats, and freshmen Rep. Alexandria Ocasio Cortez of New York.

“By accepting his party’s nomination tonight, Joe Biden has formally become a pawn of the radical leftists,” Tim Murtaugh, Trump 2020 communications director, said in a statement. “His name is on the campaign logo, but the ideas come from the socialist extremists.”

The Trump campaign’s harsh attacks on Biden contrasted what was for the most part a speech by Biden that called on Americans to “come together” and drew on historical moments from President Franklin D. Roosevelt’s New Deal to the Civil Rights movement represented by late Rep. John Lewis, D-Ga.

Biden, however, did make some pointed attacks at Trump – albeit without specifically referencing the president’s name.

“The current president has cloaked America in darkness for much too long. Too much anger. Too much fear. Too much division,” Biden said. “America is at an inflection point. A time of real peril, but of extraordinary possibilities. We can choose the path of becoming angrier, less hopeful, and more divided. A path of shadow and suspicion. Or we can choose a different path, and together, take this chance to heal, to be reborn, to unite. A path of hope and light.”

Republican party officials were having none of Biden’s words, with GOP Chairwoman Ronna McDaniel calling Biden’s career “a complete failure” and mocking his foreign policy priorities while in the Senate and as vice president.

“Joe Biden’s career has been a complete failure, from the slowest economic recovery since WWII to being “wrong on nearly every major foreign policy and national security issue over the past four decades,” she tweeted.

“After 48 years as a Washington DC swamp creature now Joe Biden wants to focus on made in America?” Trump Jr. tweeted. “Why didn’t he do it in the first half a century in DC? Why did he push so hard for NAFTA and TPP that destroyed American manufacturing and American jobs? What a joke.”

If the words from Trump and his supporters are any indication, the tone for next week’s Republican National Convention looks to be far different from that of this week’s DNC.

Trump, during a campaign stop near Biden’s birthplace in Scranton, Pa., on Thursday, argued that if Biden is elected in November law and order would break down in the country and progressive Democrats would take control of federal polices.

“At stake in this election is the survival of our nation,” Trump said. “We are dealing with crazy people on the other side, gone stone cold crazy.”

Trump attacked Biden by playing off the unrest in Democratic-led cities.

“If you want an idea of life under Biden, think of the smoldering ruins in Minneapolis, Portland, the blood-stained sidewalks of Chicago, mayhem coming to your town,” Trump said.

While polls indicate that the race between Biden and Trump has tightened in recent weeks, the former vice president still holds a more than seven-point advantage over the current White House occupant, according to an average of polls by RealClearPolitics.