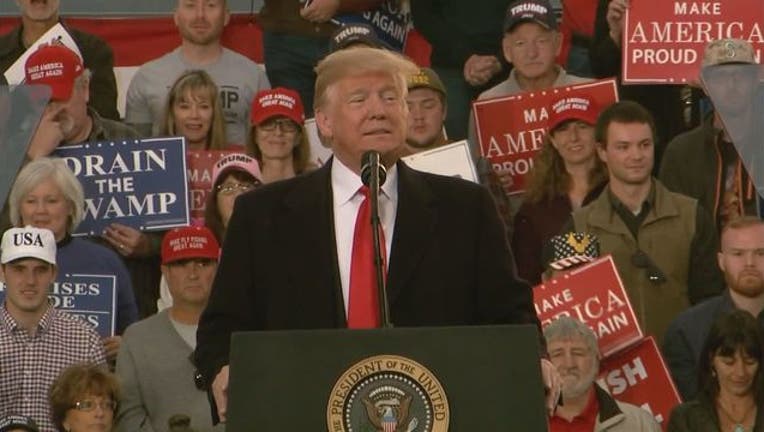 MISSOULA, Mont. (AP) — President Donald Trump suggested without evidence Thursday that Democrats or their allies are supporting a "caravan" of Central American migrants who are traveling north aiming to enter the United States.

Addressing thousands of supporters at a campaign rally in Montana, Trump said immigration is now one of the leading issues in the 2018 midterms, and he accused Democrats of supporting the migrants because they "figure everybody coming in is going to vote Democrat."

The comments mark the injection of one of Trump's signature 2016 campaign themes back into national conversation as he looks to boost Republican turnout to maintain their congressional majorities in 2018.

Trump was in Montana to boost GOP Senate candidate Matt Rosendale, who is running against Democratic Sen. Jon Tester — a lawmaker the president says has been a "disaster for Montana."

The president blames Tester for the backlash against former White House doctor Adm. Ronny Jackson, whom the president had tapped to serve as Veterans Affairs secretary. Jackson was forced to withdraw after facing ethics allegations, including claims that he got drunk and wrecked a government vehicle at a Secret Service going-away party. Tester had released a list of allegations against Jackson that was compiled by the Democratic staff of the Senate Veterans Affairs Committee.

"He was attacked so viciously, so violently by Jon Tester," Trump claimed Thursday. "That's really why I'm here."

Trump also heaped praise on Republican Rep. Greg Gianforte, who pleaded guilty to misdemeanor assault after attacking a reporter in 2017. "Any guy that can do a body slam, he's my kind of guy," Trump said. "He's a great guy, tough cookie."

Gianforte is being challenged in November's election by former state legislator Kathleen Williams.

Trump brought up Tester's opposition to the confirmation of Supreme Court Justice Brett Kavanaugh, who was accused of decades-old sexual assault. Kavanaugh denied the allegations.

Trump accused Democrats of engaging in a "heartless" campaign to sink Kavanaugh's confirmation, saying voters will "remember" how he was treated at the polls.

"This will be an election of Kavanaugh, the caravan, law and order, and common sense," Trump said.

Throughout his 73-minute rally, Trump was cheered when he called for building a wall along the nation's southern border. The crowd booed when he spoke of his Democratic opposition to his policies.

Earlier in the day, Trump threatened to close the U.S.-Mexico border if authorities there fail to stop about 3,000 Hondurans, who are in a migrant caravan passing through Guatemala trying to reach the United States. Mexico's government says migrants with proper documents can enter Mexico and those who don't either have to apply for refugee status or face deportation.

"A lot of money's been passing through people to come up and try to get to the border by Election Day because they think that's a negative for us," Trump said. "No. 1, they're being stopped, and No. 2, regardless, that's our issue."

Trump appeared to be referring to an unfounded allegation promoted by ally Rep. Matt Gaetz of Florida. The Republican lawmaker tweeted a video on Wednesday of men handing out money to people standing in line. He claimed the video showed people being paid in Honduras to join a caravan and "storm the border @ election time." Trump on Thursday tweeted the same video, writing, "Can you believe this, and what Democrats are allowing to be done to our Country?"

After questions about the video's origin, Gaetz posted a correction later Thursday on Twitter, saying, "This video was provided to me by a Honduran government official. Thus, I believed it to be from Honduras."

Neither Republican provided evidence of his claim that the people were being paid to join a caravan.

Montana marks Trump's first stop on a three-day trip out West that will take him to the border state of Arizona, where the politics of immigration are fraught, and to Nevada. Trump is boosting Republican Senate candidates as the GOP looks to maintain or expand their majority and to support vulnerable House candidates running on his ticket.