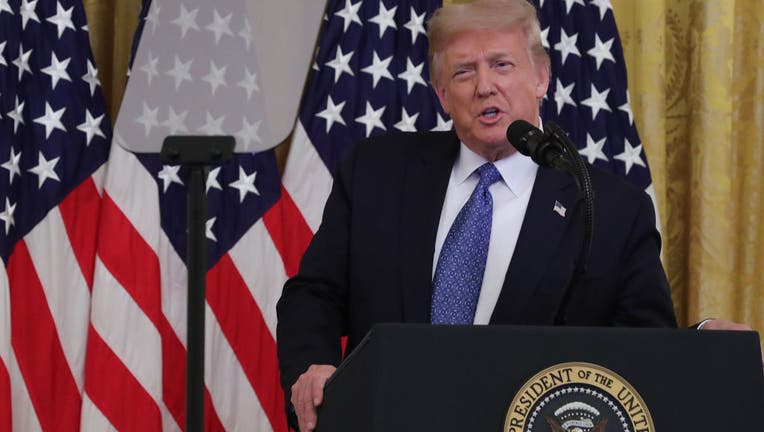 WASHINGTON, DC - JULY 22: U.S. President Donald Trump speaks during an event about 'Operation Legend: Combatting Violent Crime in American Cities' in the East Room of the White House July 22, 2020 in Washington, DC. In an attempt to define himself as

CHICAGO - Amid a surge in gun violence and protests sparked by the death of George Floyd, the nation’s third-largest city is on edge, awaiting possible greater tension in the form of a plan by President Donald Trump to dispatch dozens of federal agents to Chicago.

The White House plan emerged days after a downtown protest over a statue of Christopher Columbus devolved into a chaotic scene of police swinging batons and demonstrators hurling frozen water bottles, fireworks and other projectiles at officers. Then, on Tuesday in another neighborhood, a spray of bullets from a car passing a gang member’s funeral wounded 15 people and sent dozens running for their lives.

Tension in the city has climbed to a level that, if not unprecedented, has not been felt in a long time.

“I’ve never seen things worse in this city than they are right now,” said the Rev. Michael Pfleger, a Roman Catholic priest and longtime activist on the city’s South Side.

Much of that strain stems from the fact that it remains unclear exactly what the federal officers will do here. The plan seems to be a repeat of what happened in Kansas City, Missouri, where the administration sent more than 200 law enforcement officers to help quell violence after the shooting death of 4-year-old LeGend Taliferro.

Operation Legend — named after the young gun violence victim who was fatally shot while sleeping in a Kansas City apartment late last month — was announced on July 8. The first arrest came earlier this week.

Mayor Lori Lightfoot sought to tamp down fear that the surge will resemble the kind of scene that unfolded in Portland, Oregon, where unidentified agents in camouflage have beaten unarmed protesters and stuffed some of them into unmarked vehicles.

Lightfoot said she has been told the U.S. Attorney’s Office will supervise the additional agents supporting the Chicago offices of the FBI, the Drug Enforcement Agency and the Bureau of Alcohol, Tobacco, Firearms and Explosives.

But given the longstanding animosity between city officials and Trump, leaders from the mayor on down worry that those promises will not hold up.

City officials will be on guard for any “steps out of line,” particularly from agents with the Homeland Security Department, and they will not hesitate “to take the president to court,” Lightfoot said.

“If those agents are here to actually work in partnership on support of gun violence and violent cases, plugging into existing infrastructure of federal agents, not trying to play police in our streets, then that’s something different,” she said, while also accusing the president of trying to distract from scrutiny of the federal response to the coronavirus pandemic.

Trump announced the plan Wednesday, saying he would send agents to Chicago and Albuquerque to help combat rising crime. Acting Homeland Security Secretary Chad Wolf and Attorney General Bill Barr both said the mission in Portland — to protect federal property — differs from the focus in Kansas City, Chicago and Albuquerque.

Barr said the number of agents being deployed to Chicago is “comparable” to the Kansas City surge of more than 200.

Trump painted Democrat-led cities as out of control and lashed out at the “radical left.” Criminal justice experts say the increase in violence in some cities defies easy explanation.

“In recent weeks, there has been a radical movement to defend, dismantle and dissolve our police department,” Trump said, blaming the movement for “a shocking explosion of shootings, killings, murders and heinous crimes of violence.”

Lightfoot has repeatedly said she does not support protesters’ calls to pull money from police in favor of social services.

If the federal agents do as they have done in Portland, one prominent minister on the city’s West Side said the situation will turn the city into a “magnet” for the same kind of people who infiltrated the statue protest, put on dark clothes and distributed and threw projectiles at police from behind umbrellas.

“It’s going to be like that, but on steroids,” the Rev. Marshall Hatch warned. “Chicago is one of those epicenters where you already have an unsettled social situation and racial situation. And you’re going to find out that Chicago is a lot more volatile in the middle of a long hot summer than Portland is.”

He fears such a chaotic scene is exactly what the president wants as he seeks reelection.

Chicago might offer Trump an opportunity “to somehow scare the middle class into thinking he’s the only one standing between them and the barbarians,” Hatch said.

Pfleger said federal agents could help stem violence if they stick to helping detectives make arrests and increase the city’s homicide clearance rate, which the department said this month is under 40%. They could also help stem the flow of illegal guns pouring into the city from Indiana, Mississippi and elsewhere.

“A big reason why there are so many murders in the city is that you have a really good chance of getting away with murder here,” Pfleger said.

Nor, he said, was it lost on people that nobody had been arrested for the shooting outside the church despite Police Superintendent David Brown’s contention that two squad cars were on the street and a tactical unit nearby.

“Everybody’s saying on the street, ‘We have to protect ourselves because the police aren’t going to protect us’” Pfleger said. “That’s the mentality.”

The shooting went on long enough for the gunmen and people attending the funeral who returned fire to leave at least 60 shell casings at the scene.

At a news conference, Brown implored witnesses to come forward with information about the attack, which police believed was carried out in retaliation for another shooting. Observers suggested that the police department’s reputation for brutality, misconduct and racism made Brown’s plea a tough sell.

That mistrust also plays into another activist’s concern that no matter what federal agents do when they arrive in the city, it will not help and may aggravate the situation.

“Anytime you have police in a community that have no relationship to the community — with the business owners, with the youth — it makes the situation worse,” said Jahmal Cole, founder and executive director of a community organization on the South Side called My Block, My Hood, My City.