NASHVILLE, Tenn. - President Donald Trump is expected to bring a former associate of Hunter Biden as his guest to the final presidential debate on Thursday, according to FOX News.

Tony Bobulinski has claimed that Joe Biden was involved in his son’s foreign business dealings while serving as vice president, which Biden has repeatedly denied.

Bobulinski said he is the CEO of Sinohawk Holdings, which he claimed "was a partnership between the Chinese operating through CEFC/Chairman Ye and the Biden family," FOX News reported.

Bobulinski said in a statement to FOX News that he does not believe Joe Biden's past claim that he did not discuss his son Hunter's business affairs with him, claiming that Hunter “frequently referenced asking him for his sign-off or advice on various potential deals.”

The Biden campaign fired back at Bobulinski’s claims in a statement to the network.

"As Chris Wallace said on the air about this very smear, 'Vice President Biden has actually released his tax returns - unlike President Trump - and there is no indication he ever got any money from anybody in these business deals,’” Biden campaign spokesman Andrew Bates said in the statement. “Joe Biden has never even considered being involved in business with his family, nor in any overseas business whatsoever. He has never held stock in any such business arrangements nor has any family member or any other person ever held stock for him.” 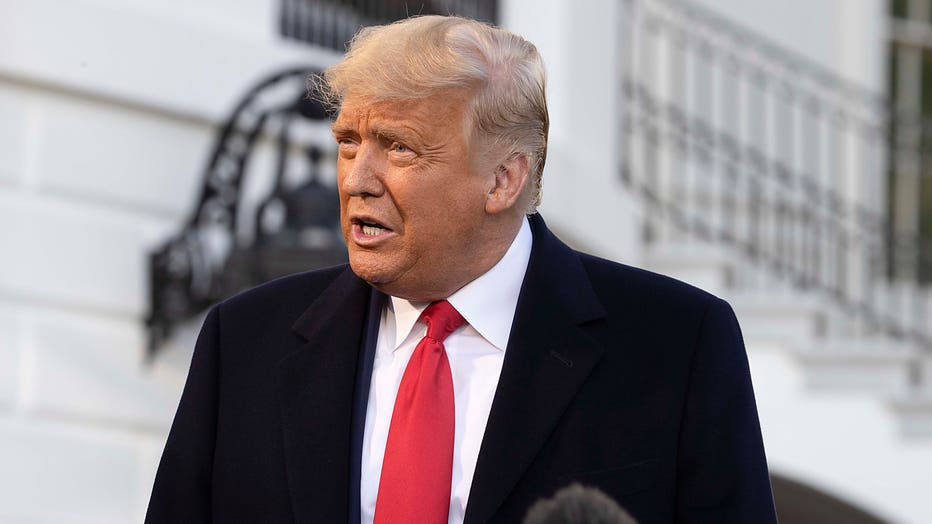 President Donald Trump talks to the media outside the White House on Oct. 21, 2020 in Washington, D.C. (Photo by Tasos Katopodis/Getty Images)

With less than two weeks until Election Day, Trump has been promoting an unconfirmed New York Post report from last week that cites an email in which an official from the Ukrainian gas company Burisma allegedly thanks Hunter Biden, who served on the company’s board, for arranging for him to meet Joe Biden during a 2015 visit to Washington, D.C.

Hunter Biden joined the board of Burisma in 2014, around the time his father, then U.S. vice president, was helping conduct the Obama administration’s foreign policy with Ukraine.

The Biden campaign has rejected Trump’s assertion of wrongdoing and notes that Biden’s schedule did not show a meeting with the Burisma official.

In subsequent reporting by the New York Post, Bobulinski was listed as the recipient of a 2017 email published that purported to show a business arrangement involving a Chinese company and members of the Biden family.

Bobulinski was expected to turn his electronic devices and records of business dealings with Hunter and Joe Biden’s brother, Jim, over to the FBI, according to FOX News.

The Post said it had obtained a hard drive from Trump’s personal lawyer Rudy Giuliani containing the emails, and that the messages were found on a laptop that had been left last year at a Delaware computer repair shop for service but never retrieved.

Hunter Biden himself has not spoken publicly in the last week, including to confirm whether or not the laptop is his. The Biden campaign has also not addressed that question, though a lawyer for Hunter Biden, George Mesires, said in a statement last week to the Associated Press that “we have no idea where this came from, and certainly cannot credit anything that Rudy Giuliani provided to the NY Post.”

Some former national security officials and other experts said the episode raised multiple red flags of a possible foreign disinformation effort, especially given the involvement of Giuliani and his active role in promoting an anti-Biden narrative on Ukraine.

Nevertheless, two senior administration officials told FOX News this week that the FBI is in possession of the laptop purportedly belonging to Hunter Biden. The FBI declined to confirm or deny the existence of an investigation into the laptop or the emails, as is standard practice.

Trump has also faced recent questions around his business dealings in China. The New York Times reported this week that Trump held a previously unknown Chinese bank account, controlled by Trump International Hotels Management LLC, which tax records show paid $188,561 in taxes in China while pursuing licensing deals there from 2013 to 2015.

The foreign account does not show up on Trump’s public financial disclosures, where he must list personal assets, because it is held under a corporate name, the newspaper reported. The president also maintains bank accounts in Britain and Ireland, according to a Times analysis of the president’s tax records.

Alan Garten, a lawyer for the Trump Organization, told the Times that the company had “opened an account with a Chinese bank having offices in the United States in order to pay the local taxes” associated with efforts to do business there. He said the company had opened the account after establishing an office in China “to explore the potential for hotel deals in Asia.”

“No deals, transactions or other business activities ever materialized and, since 2015, the office has remained inactive,” Garten said. “Though the bank account remains open, it has never been used for any other purpose.”